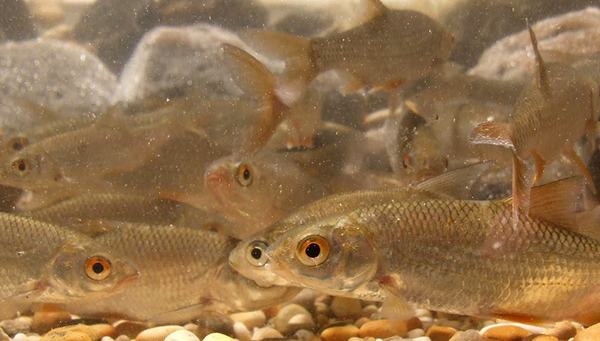 The preferred food of pike in shallow lakes in Denmark and Sweden is roach. Seven in ten fish found by researchers in the stomachs of pike were roach – and the numbers tended to be even higher in wintertime. The roach that pike ate in lakes with tributary or outflowing rivers were, admittedly, smaller during the winter, and became somewhat thinner as winter went on. This was in contrast to the members of the same species in isolated lakes: their condition remained similar all year round.

This was the subject under investigation by an international research team under Jakob Brodersen from Eawag, which looked at four shallow lakes with and without connecting rivers. The results matched the expectations of the researchers: in the “open” lakes, a proportion of the roach migrated out of the lake during the winter into the tributaries and outflows – and those that did so were primarily the largest specimens from amongst shoals living in open water. During the absence of these large roach, the pike catch their prey close to the lake shore – so, smaller roach, in particular. “In these lakes, the ways in which feeding and energy flow through the ecosystem change – from algae right through to pike”, Broderson discovered. When the large roach return from the rivers in the spring, the pike have a field day: they quickly regain weight, even becoming fatter than their species counterparts in isolated lakes.

Thanks to partial migration, the largest and fittest roach – which are able, because of their size, to survive for a relatively long period in streams where food is less plentiful – can find safety from pike over the winter. This increases their chances of being able to reproduce in the spring. At the same time, however, it also increases the chances of pike having a bountiful food source in the summer. These effects are caused almost solely by the variable availability of food at different times in the relevant ecosystems. In contrast to the well-documented salmon migrations, partial migrations by roach do not represent shifts of substantial food volumes from one ecosystem to another. And although it’s “only” about differences in timing, these migrations nevertheless affect an ecosystem as a whole.

What the absence of the migrating prey means, not only for their predators, but also for an entire ecosystem, has never been described before, according to Bordersen. “It was always assumed that the differences between lean times and times of plenty were greater in open lakes”, says the fish ecologist. It also stood to reason that the migration of significant fish stocks out of the open water would shift the whole nutrient flux towards the areas close to the shore. “However, we were only able to prove it because we found comparable ecosystems with and without fish migration.”

Brodersen assumes that such influences of absentee fish on the food webs are a widespread phenomenon. “They are, however, much harder to document in less clearly demarcated terrestrial and maritime ecosystems.”

Animal migrations are becoming an increasingly common focus of research. Scientists are looking not only at spectacularly long-distance migrations such as intercontinental bird migrations or spawning migrations of salmon from the sea to mountain lakes, explains fish ecologist, Brodersen. “We also need to look at local shifts in partial populations if we are to understand the life and development of individual species or the material flows and stability of ecosystems.”

Although there are no large, shallow lakes in Switzerland, there are smaller waters that are comparable to the lakes that were the subject of the research in Sweden and Denmark. Jakob Brodersen gives the examples of Hüttwilersee (in the canton of Thurgau), Rotsee (Lucerne) and Moossee (Bern). “Perhaps we should cast an eye over the tributaries of these lakes when we’re out walking in the wintertime, and see whether roach are migrating into them temporarily.” The same principle is relevant to many other food webs, however. And the study has shown, once again, how important it is to remove artificial barriers to migration – as these affect not only single species but also the functioning of entire ecosystems.

Patterns of animal migration and the ecological forces that shape them have been studied for centuries. Yet ecological impacts caused by the migration, such as altered predator–prey interactions and effects on community structure, remain poorly understood. This is to a large extent due to the scarcity of naturally replicated migration systems with negative controls, that is, ecosystems without migration. In this study, we tested whether partial migration of certain species within the overall prey community affects foraging ecology of top predators and thereby alters energy pathways in food webs. We carried out the study in independent replicated freshwater lake systems, four with and four without opportunity for prey migration. Specifically, we compared predator foraging mode in lakes where cyprinid prey fish perform seasonal partial migrations into connected streams with lakes lacking migratory opportunities for prey fish. We found clear seasonal bottom-up effects of prey migration on predators, including changes in size structure and total biomass of ingested prey, size-specific changes in littoral versus pelagic origin of diet, and a higher degree of feast-and-famine for predators in systems with migratory prey. Our analyses further showed that partially migratory prey species constitute a larger part of the prey community in systems that allow migration. Hence, prey migrations have important implications for predator foraging ecology and may cause seasonal shifts in the importance of their supporting energy pathways. We suggest that such bottom-up effects of partial migration may be a widespread phenomenon both in aquatic and in terrestrial ecosystems.
See DOI
See Institutional Repository
Hansen, J. H.; Skov, C.; Baktoft, H.; Brönmark, C.; Chapman, B. B.; Hulthén, K.; Hansson, L.-A.; Nilsson, P. A.; Brodersen, J. (2019) Ecological consequences of animal migration: prey partial migration affects predator ecology and prey communities, Ecosystems, doi:10.1007/s10021-019-00402-9, Institutional Repository
Created by Sibylle Hunziker
Share with others: