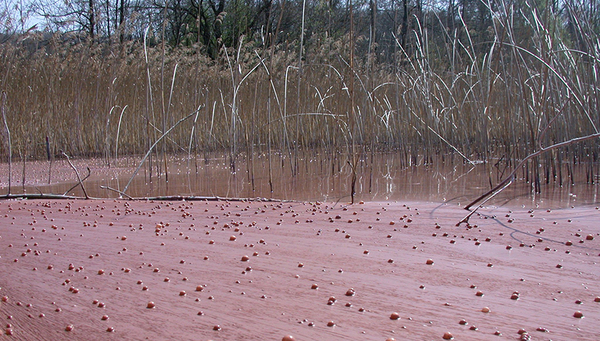 Freshwater lakes are teeming with blue-green algae that produce a heady cocktail of substances. Little is known as yet about the health risks associated with these substances, although a review of the literature by Eawag scientist Elisabeth Janssen has now revealed some potentially harmful effects.

Between spring and autumn, when the lakes warm up and the concentration of nutrients increases, all around the world blue-green algae are proliferating en masse. Switzerland is no exception, with the algae occurring in lakes such as the Baldeggersee or Greifensee. This may be problematical, as some blue-green algae, known scientifically as cyanobacteria, produce toxic substances. When people swim in a lake with algal bloom or swallow the water, small amounts of these toxins can cause skin irritation, vomiting and/or diarrhoea. To aquatic organisms such as amphipods, the substances can even be lethal. Aside from these known toxins, however, the blue-green algae also produce countless other substances into which there has been little research to date.

As revealed in a comprehensive study of the literature by Elisabeth Janssen, research interests so far have been almost entirely focussed on one particular class of substances: the microcystins. More than 90 percent of all studies have been concerned with these substances and their hazards. “But the microcystines are only the tip of the iceberg”, says Janssen. More than half of the substances produced by blue-green algae are not microcystines. The environmental scientist’s follow-up research has shown that these substances may well also present a hazard to humans and animals. Harmful effects on health have already been identified by some studies, which, Janssen says, is a clear sign that it is important to conduct a risk assessment of the other substance classes also.

It would simply be an impossible task to investigate every individual substance, however. So, to restrict the subject matter, the researcher suggests focussing initially on identifying the most common and long-lived, and then testing these to ascertain their level of toxicity. It is precisely this that Janssen and her team are working on at full tilt, currently. A particular challenge here is that no “standards” exist for most of these substances. These standards are required in order to prove that a specific substance is present in a sample. If no standard exists, additional investigations are required. “This work is very time-consuming”, says Janssen, “but it does offer a great deal of potential for discovering new interconnections in this area.” The researcher is hoping that her literature review will bring this topic to the attention of more environmental scientists and motivate them to undertake the relevant research. There is no way she can tackle the vast number of substances produced by the blue-green algae single-handedly.

Cyanobacterial peptides beyond microcystins – a review on co-occurrence, toxicity, and challenges for risk assessment

Cyanobacterial bloom events that produce natural toxins occur in freshwaters across the globe, yet the potential risk of many cyanobacterial metabolites remains mostly unknown. Only microcystins, one class of cyanopeptides, have been studied intensively and the wealth of evidence regarding exposure concentrations and toxicity led to their inclusion in risk management frameworks for water quality. However, cyanobacteria produce an incredible diversity of hundreds of cyanopeptides beyond the class of microcystins. The question arises, whether the other cyanopeptides are in fact of no human and ecological concern or whether these compounds merely received (too) little attention thus far. Current observations suggest that an assessment of their (eco)toxicological risk is indeed relevant: First, other cyanopeptides, including cyanopeptolins and anabaenopeptins, can occur just as frequently and at similar nanomolar concentrations as microcystins in surface waters. Second, cyanopeptolins, anabaenopeptins, aeruginosins and microginins inhibit proteases in the nanomolar range, in contrast to protein phosphatase inhibition by microcystins. Cyanopeptolins, aeruginosins, and aerucyclamide also show toxicity against grazers in the micromolar range comparable to microcystins. The key challenge for a comprehensive risk assessment of cyanopeptides remains their large structural diversity, lack of reference standards, and high analytical requirements for identification and quantification. One way forward would be a prevalence study to identify the priority candidates of tentatively abundant, persistent, and toxic cyanopeptides to make comprehensive risk assessments more manageable.
See DOI
See Institutional Repository
Janssen, E. M. -L. (2019) Cyanobacterial peptides beyond microcystins – a review on co-occurrence, toxicity, and challenges for risk assessment, Water Research, 151, 488-499, doi:10.1016/j.watres.2018.12.048, Institutional Repository
Created by Felicitas Erzinger
Share with others: