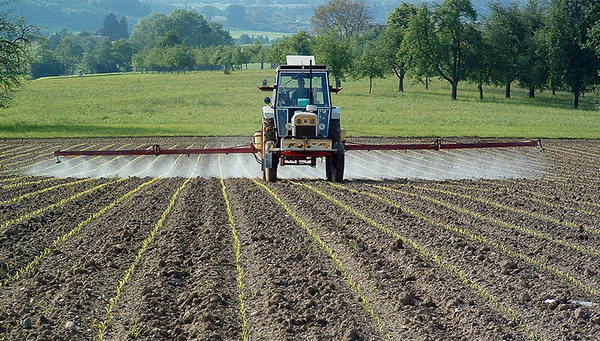 A new study by an interdisciplinary team from Eawag has shown that substances from agriculture affect living organisms in rivers and streams to a greater extent than treated wastewater, which has less impact on the species composition of microorganisms.

Community wastewater treatment plants and agricultural practices are the primary sources of pollution in rivers and streams, and affect aquatic communities. Substances such as traces of pharmaceuticals, nutrients, biocides, resistant bacteria and heavy metals find their way into the watercourses from wastewater treatment plants, while agriculture is primarily responsible for inputs of plant treatment agents, fine sediments and nutrients. However, little was known until recently about the relative influences of the two sources, which is why Christian Stamm and his team set out to plug this gap with their EcoImpact project—resulting in a new study that was recently published in the journal “Science of the Total Environment”.

Between 2013 and 2014, he and his team took water samples every two months at 23 wastewater treatment sites, both above and below the outflow pipes. They used the samples to determine the water quality and identify what substances were present in the water. In the spring of each year, they identified the macroinvertebrates present upstream and downstream of the outflows.

The results showed that the impact of agriculture outweighs the organic contamination from wastewater treatment plants. The incidences of insects and other small invertebrates downstream varied only slightly in comparison with those upstream. The only exception to this was worm-like organisms, which seem to feel at home in the waters mixed with treated wastewater, and are far more common below the treatment plants than above them.

Agricultural inputs on the other hand have a significant impact on biodiversity: “Sensitive species in particular were rare in areas which were intensively farmed”, says Stamm. These include various mayflies and stoneflies, for example. The researchers also found that pesticides were the biggest culprits, and that increased inputs of nutrients were barely reflected in the species composition. “The results underline the need to substantially reduce pesticide pollution from agriculture”, stresses Christian Stamm.

The term “pesticide” is an umbrella term for plant protection agents (PPA) and biocides. While PPAs are predominantly used in agriculture, biocides are also used domestically, in products such as disinfectants, rat poison and wood treatment agents.

Water pollution is ubiquitous globally, yet how the effects of pollutants propagate through natural ecosystems remains poorly understood. This is because the interactive effects of multiple stressors are generally hard to predict. Agriculture and municipal wastewater treatment plants (WWTPs) are often major sources of contaminants for streams, but their relative importance and the role of different pollutants (e.g. nutrients or pesticides) are largely unknown. Using a 'real world experiment' with sampling locations up- and downstream of WWTPs, we studied how effluent discharges affected water quality and macroinvertebrate communities in 23 Swiss streams across a broad land-use gradient.
Variation partitioning of community composition revealed that overall water quality explained approximately 30% of community variability, whereby nutrients and pesticides each independently explained 10% and 2%, respectively. Excluding oligochaetes (which were highly abundant downstream of the WWTPs) from the analyses, resulted in a relatively stronger influence (3%) of pesticides on the macroinvertebrate community composition, whereas nutrients had no influence. Generally, the macroinvertebrate community composition downstream of the WWTPs strongly reflected the upstream conditions, likely due to a combination of efficient treatment processes, environmental filtering and organismal dispersal. Wastewater impacts were most prominently by the Saprobic index, whereas the SPEAR index (a trait-based macroinvertebrate metrics reflecting sensitivity to pesticides) revealed a strong impact of arable cropping but only a weak impact of wastewater.
Overall, our results indicate that agriculture can have a stronger impact on headwater stream macroinvertebrate communities than discharges from WWTP. Yet, effects of wastewater-born micropollutants were clearly quantifiable among all other influence factors. Improving our ability to further quantify the impacts of micropollutants requires highly-resolved water quality and taxonomic data with adequate spatial and temporal sampling. These improvements would help to better account for the underlying causal pathways that drive observed biological responses, such as episodic contaminant peaks and dispersal-related processes.
See DOI
See Institutional Repository
Burdon, F. J.; Munz, N. A.; Reyes, M.; Focks, A.; Joss, A.; Räsänen, K.; Altermatt, F.; Eggen, R. I. L.; Stamm, C. (2019) Agriculture versus wastewater pollution as drivers of macroinvertebrate community structure in streams, Science of the Total Environment, 659, 1256-1265, doi:10.1016/j.scitotenv.2018.12.372, Institutional Repository