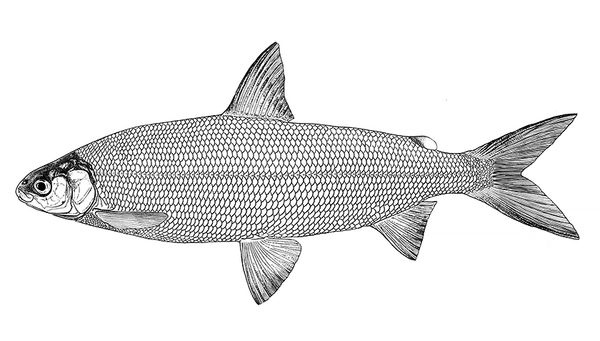 In the journal ZooKeys, a group of scientists from Eawag and Bern University have described seven whitefish species endemic to the Bernese Oberland lakes – including four not previously described scientifically, two of which have only been identified as distinct species in the last few years. In Switzerland, the whitefish diversity of Lakes Thun and Brienz is possibly matched only by that found in Lake Lucerne; and in deep lakes of this kind further surprises cannot be ruled out.

When the biologist Paul Steinmann documented the whitefish of Switzerland in the first half of the 20th century, he reported a total of 35 different “forms” – at least two in each major lake. As we now know, these “forms” are not just ecotypes, adapted to different environmental conditions, but true species, whose genetic and ecological differentiation can be partly or completely eliminated by hybridisation, if habitats are altered. One such alteration was the pollution and eutrophication to which Swiss lakes were exposed after the mid-20th century. As a result, a third of all historically known whitefish species became extinct or merged genetically with other whitefish species through hybridisation. The species concerned, with their particular environmental adaptations, have been lost irrevocably, since all Switzerland’s whitefish species are endemic – i.e. they only occur in the lakes where they arose.

Rapid speciation
After the last ice age, two or more whitefish species developed in all the major prealpine lakes. But the foundations for this rapid speciation (also known as “adaptive radiation”) were laid before the lakes were colonised: the hybridisation of two ancient whitefish lineages gave their descendants a high degree of genetic diversity, allowing numerous specialisations to develop in the wide variety of habitats encountered by whitefish in the deep lakes. As the whitefish increasingly adapted to different types of food, spawning sites and spawning seasons, available resources were used in a way that permitted the development and coexistence of multiple species.

Among the lakes which were originally particularly species-rich, those less affected by eutrophication were Lake Lucerne and the lakes of the Bernese Oberland. Harbouring respectively six and seven known species, these are still among the lakes with the highest whitefish diversity worldwide.

At least six of the Bernese Oberland species arose after the end of the last ice age, around 12,000 years ago. The origins of the seventh species are more complex, as its history involves hybridisation with whitefish from Lake Constance, introduced to Lakes Thun and Brienz by stocking in the 20th century.
All seven species have now been scientifically described – four for the first time – by Oliver Selz and a group of evolutionary and fish biologists led by Ole Seehausen at Eawag and the Bern University Institute of Ecology & Evolution.

Scientific descriptions already existed for the “Brienzlig” (Coregonus albellus), the “Balchen” (Coregonus alpinus) and the “Felchen” (Coregonus fatioi). The first two – the smallest and the largest species – had already been described by the Genevan zoologist Victor Fatio in 1885. All three species are found both in Lake Thun and in Lake Brienz.

The “Kropfer”, a Lake Thun deep-water whitefish, has been known for the past 20 years as Coregonus alpinus, in accordance with Kottelat’s “European freshwater fishes”. However, Kottelat’s handbook clearly referred to a specimen, held at the Natural History Museum of Geneva, which had been designated as “Balchen” by Fatio in 1885. For this reason, the authors of the study have now restored the name C. alpinus to the “Balchen”. The “Kropfer” has been newly described and named Coregonus profundus.
In 2018, the scientists discovered a species which, on account of its similarity to the “Balchen”, was provisionally designated as “Balchen2”. This species, in Lake Thun, has now been named Coregonus steinmanni – in honour of the whitefish researcher Paul Steinmann. Further investigations revealed that the Lake Brienz whitefish initially also designated as “Balchen2” is in fact a separate species. As the only species endemic to Lake Brienz, it has been named Coregonus brienzii.

Paul Steinmann (1885–1953): researcher, teacher, expert, fishing society president
Paul Steinmann, having studied in Basel and Munich, completed his doctoral thesis on “The fauna of mountain streams” under the zoologist Friedrich Zschokke in 1907. Following study visits to Naples and Trieste, and a brief period as a privatdozent at Basel University, Steinmann was appointed to teach natural history at the Kantonsschule Aarau in 1911 – a position he held until his retirement in 1953. As co-founder and Director of the Aarau Natural History and Heritage Museum, he served as President of the Aargau Naturforschende Gesellschaft from 1923 to 1928. As President of the Swiss Fishing Society (now the Swiss Fishing Federation/SFV) and Editor of the Schweizerische Fischerei-Zeitung – and an internationally recognised expert in hydrobiology – Steinmann was an early advocate of the protection of natural waters and fish habitats. His extensive fish collection, originally donated to Eawag and still a valuable resource for researchers, is now curated by the Natural History Museum of Bern and forms the subject of a new exhibition. His monograph on Swiss coregonids, published in 1950, remains a vital reference for the study of whitefish diversity in prealpine lakes several generations later. Following this week’s publication of the taxonomic revision in ZooKeys, the Bernese Oberland whitefish species discovered in 2018 now bears Paul Steinmann’s name – Coregonus steinmanni. Literature: Entry for Paul Steinmann in Historisches Lexikon der Schweiz and Obituary in Mitteilungen der aargauischen Naturforschenden Gesellschaft Vol. 25 (1958), pp. 224–228.

Also scientifically described for the first time in this study is the “Albock” (Coregonus acrinasus). The common name “Albock” has been in use since medieval times. In old documents, invoices and fisheries laws, it is used to refer to the larger whitefish from Lake Thun, many of which regularly migrated to the Aare river, where large numbers were caught. According to first author Oliver Selz, “It’s not quite clear what became of this species.” Morphologically, specimens of the migratory “Albock” preserved from the 19th century most closely resemble today’s “Felchen” (C. fatioi).

“Today’s pointy-snouted ‘Alböcke’, which have only been observed in increasing numbers in the catches of Oberland fishermen since the late 20th century, have a recent history of hybridisation: genetically, they are closely related both to whitefish introduced to the Oberland lakes from Lake Constance in the 20th century, and to the other Lake Thun whitefish.” Why the traces of stocking are only apparent in Lake Thun, and not in Lake Brienz, and what species the original “Albock” should be assigned to, are questions to be investigated in future research projects. The biologists conclude that further surprises emerging from the depths of the Oberland lakes cannot be ruled out.

A taxonomic revision of the whitefish of lakes Brienz and Thun, Switzerland, with descriptions of four new species (Teleostei, Coregonidae)

The alpha taxonomy of the endemic whitefish of lakes Brienz and Thun, Switzerland, is revised. We evaluate the status of seven known species: Coregonus steinmanni sp. nov., Coregonus profundus sp. nov. and Coregonus acrinasus sp. nov. are endemic to Lake Thun; Coregonus Brienzii sp. nov. is endemic to Lake Brienz; and C. alpinus, C. albellus, and C. fatioi from lakes Brienz and Thun are redescribed. One of these species, C. alpinus, is revised, since the lectotype for this species is incongruent with the species description given by Kottelat (1997) and Kottelat and Freyhof (2007). The name C. alpinus is thus retained for the lectotype designated by Kottelat (1997) and a new description of this taxon provided. For the species otherwise described by Kottelat (1997) and Kottelat and Freyhof (2007) as C. alpinus the new name C. profundus is designated. Coregonus acrinasus is genetically partially of allochthonous origin, closely related to the radiation of Lake Constance, and we therefore compare it to all recognized species of Lake Constance, C. wartmanni, C. macrophthalmus, C. arenicolus, and C. gutturosus.
See DOI
See Institutional Repository
Selz, O. M.; Dönz, C. J.; Vonlanthen, P.; Seehausen, O. (2020) A taxonomic revision of the whitefish of lakes Brienz and Thun, Switzerland, with descriptions of four new species (Teleostei, Coregonidae), ZooKeys, 989, 79-162, doi:10.3897/zookeys.989.32822, Institutional Repository

Comprehensive descriptions
For the new scientific descriptions, the fish biologists made use of both historical and more recent specimens. The latter were obtained partly from commercial catches. Most of the fish were captured in various projects conducted by Eawag and Bern University in recent years; while some specimens came from “Projet Lac”, the majority came from targeted fishing carried out at spawning sites, along a depth gradient, throughout the various species’ spawning seasons. These specimens were compared with specimens dating back as far as 150 years from the Natural History Museum of Geneva and from Eawag’s Paul Steinmann collection, now curated by the Natural History Museum of Bern. The descriptions include not only morphological traits – e.g. gill raker number and shape, indicating the foraging habits of a fish species – but also the results of genetic analysis and data on fish ecology (in particular, feeding and spawning behaviour).
On behalf of the Federal Office for the Environment (FOEN), Eawag is currently revising the taxonomy of whitefish in Switzerland. The scientific publication on Bernese Oberland whitefish will shortly be followed by others on Lakes Lucerne, Zug, Sempach and Sarnen.

The 2018 in Thun found “Balchen2” has now been named Coregonus steinmanni – in honour of the whitefish researcher Paul Steinmann.
(Photo: Eawag)