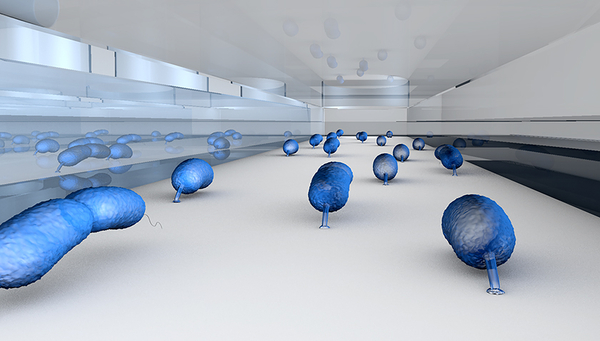 Individual bacterial cells have short memories. But groups of bacteria can develop a collective memory that can increase their tolerance to stress. This has been demonstrated experimentally for the first time in a study by Eawag and ETH Zurich scientists published in PNAS.

Bacteria exposed to a moderate concentration of salt survive subsequent exposure to a higher concentration better than if there is no warning event. But in individual cells this effect is short-lived: after just 30 minutes, the survival rate no longer depends on the exposure history. Now two Eawag/ETH Zurich microbiologists, Roland Mathis and Martin Ackermann, have reported a new discovery made under the microscope with Caulobacter crescentus, a bacterium ubiquitous in freshwater and seawater.

When an entire population is observed, rather than individual cells, the bacteria appear to develop a kind of collective memory. In populations exposed to a warning event, survival rates upon a second exposure two hours after the warning are higher than in populations not previously exposed. Using computational modelling, the scientists explained this phenomenon in terms of a combination of two factors. Firstly, salt stress causes a delay in cell division, leading to synchronization of cell cycles; secondly, survival probability depends on the individual bacterial cell’s position in the cell cycle at the time of the second exposure. As a result of the  cell cycle synchronization, the sensitivity of the population changes over time. Previously exposed populations may be more tolerant to future stress events, but they may sometimes even be more sensitive than populations with no previous exposure.

Martin Ackermann comments: “If we understand this collective effect, it may improve our ability to control bacterial populations.” The findings are relevant, for example, to our understanding of how pathogens can resist antibiotics, or how the performance of bacterial cultures in industrial processes or wastewater treatment plants can be maintained under dynamic conditions. After all, bacteria play a crucial role in almost all bio- and geochemical processes. From a human perspective, depending on the particular process, they are either beneficial – e.g. if they break down pollutants or convert nutrients into energy – or harmful, especially if they cause diseases. For the researchers, says Mathis, another important conclusion can be drawn: “If you want to understand the behaviour and fate of microbial populations, it’s sometimes necessary to analyse every single cell.”

Experimental set-up with the bacterium Caulobacter crescentus in microfluidic chips: each chip comprises eight channels, with a bacterial population growing in each channel. The bacteria are attached to the glass surface by an adhesive stalk. When the bacterial cells divide, one of the two daughter cells remains in the channel, while the other is washed out. Using time-lapse microscopy, bacterial cell-division cycles and survival probabilities can thus be reconstructed.
(Graphic: Stephanie Stutz)

Roland Mathis sets up an experiment. A population of bacterial cells is loaded in the individual channels of the microchip.
(Photo: Peter Penicka, Eawag)