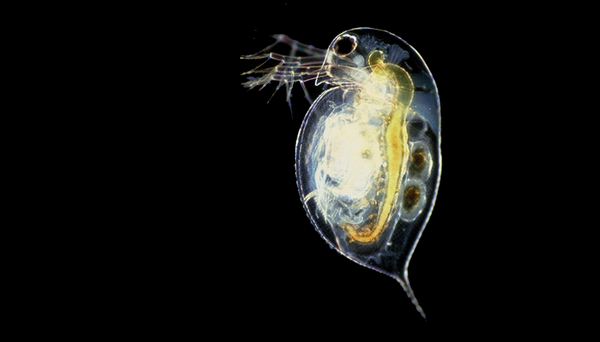 Daphnia can adapt rapidly to changing environmental conditions. This was shown by a study carried out by scientists from Eawag and Cornell University in Oneida Lake (NY, US). This adaptation influences daphnia population density, thus affecting the entire lake food web.

Daphnia, also known as water fleas, play an important role in the food web of lakes: they feed on phytoplankton and are eaten by predators such as fish. Their food resources show marked seasonal variation: in eutrophic waters, the summer is particularly challenging for daphnia, as the phytoplankton community is dominated by cyanobacteria (blue-green algae), which are of poor nutritional quality and often contain toxins.

Adaptation on a short time scale

Certain daphnia genotypes are known to be resistant to dietary cyanobacteria. These would therefore be expected to reproduce more effectively in eutrophic lakes, and in an earlier study in Lake Constance natural selection of this kind was indeed observed over a period of several years. Researchers from Eawag and Cornell University now wished to investigate how rapidly this adaptation occurs. Their study, which began with the collection of samples from Oneida Lake in 2015, was recently completed while Cornell-based project leader Nelson Hairston Jr. was on sabbatical at Eawag.

According to Lynn Govaert, a researcher at Eawag’s Aquatic Ecology department and Zurich University, “We showed that daphnia respond within a single season to changes in the food available, with the resistant genotypes becoming more abundant; in other words, evolution can proceed very rapidly.”

Increased frequency due to adaptation

Although, on a diet containing cyanobacteria, the resistant daphnia were also found to have a somewhat lower growth rate than on a typical spring diet, it was higher than that seen in the more sensitive genotypes, whose growth rate declined sharply in the summer. Consequently, the resistant genotypes dominated the daphnia population in the late summer. “Using models,” Govaert adds, “we also demonstrated that, without this evolutionary adaptation, the daphnia population in Oneida Lake would have been much smaller in the late summer.” Food resources for fish would also have been reduced as a result.

Over the longer term, there will probably be no change in the composition of the daphnia community, at least as long as the cycle begins again each spring and seasonal variation in food availability follows the same annual pattern.

While the aim of the study, as Govaert stresses, was to explore consumer-resource dynamics in Oneida Lake, she is still prepared to venture a hypothesis: “Climate change can also influence lake ecology, and our findings suggest that daphnia could adapt to those changes, too.”