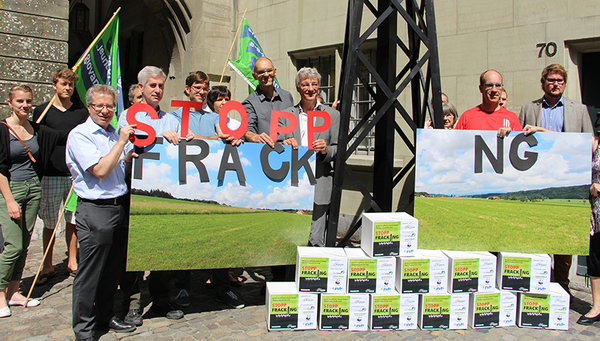 The use of fracking for gas extraction is widely opposed in Switzerland. Despite the almost complete lack of concrete projects, certain cantons have already imposed bans. Social scientific analysis of the policy processes involved can help us to understand the factors driving such decisions. In the face of uncertainties, it is frequently argued that the precautionary principle should be applied.

In 2013, National Councillor Aline Trede (Green Party, Canton Bern) called on the Federal Council to clarify its position with regard to hydraulic fracturing (fracking) in Switzerland [1], thus placing the controversial gas extraction method firmly on the political agenda in this country. In the fracking process, a mixture of water, sand and chemicals is pumped into layers of shale at a pressure sufficiently high to open up innumerable fractures in the rock along horizontal boreholes. This makes it possible to extract large amounts of natural gas locked in the shale [Fig. 2].

In the US, in particular, fracking technology has triggered a boom in natural gas, leading to a fall in energy costs and boosting the economy in a number of states (e.g. Texas). It is therefore scarcely surprising that other countries have shown an interest in this technology: fracking projects have been discussed, for example, in the UK, in France and Germany. These debates are generally polarized and emotional. There are fears of adverse impacts on the environment since – if improperly applied – fracking can lead to contamination of groundwater or emissions of methane (a potent greenhouse gas). In addition, environmental risks are associated with the use and disposal of fracking chemicals [2, 3]. For these reasons, the Trede Postulate called on the Federal Council to investigate what legal foundations would be required for the introduction of a ten-year moratorium on shale gas exploration and exploitation.

Under existing law, the cantons are responsible for regulating the use and exploitation of underground natural resources. The use of fracking is not specifically regulated, but falls under general cantonal legislation on mineral rights and the cantonal concession system. Only the environmental impact assessment – to which all projects are subject – is required by federal legislation. So if fracking is to be banned, this must be the result of a political process at the cantonal level. Any regulations are negotiated and developed by collective political actors such as interest groups, parties, governments and administrative bodies. Within such policy processes, actors with similar goals usually form coalitions. To understand how regulations arise, it is thus useful to analyse the process of negotiation between actors from a political science viewpoint [4]: What is the initial position in individual cantons? What coalitions of actors seek to promote or oppose a ban on fracking technology? What strategies do they employ?

In Switzerland, potential fracking sites are mainly to be found in the plains of the Central Plateau [5, 6], though the precise extent of shale gas deposits is difficult to estimate. Accordingly, the degree of political attention devoted to fracking varies from one canton to another. To date, more than two parliamentary motions on this issue have been recorded in only six cantons – Thurgau, Geneva, Fribourg, Bern, Vaud and Neuchâtel. As part of an international comparative project, we investigated the policy debates in Neuchâtel, Vaud and Bern [7]. Using official publications, newspaper articles and other documents, we first reconstructed the policy processes for each canton.

The three cantons differed both in the initial position and in the policy processes. In Canton Neuchâtel, from 2008, a multinational gas company was interested in securing an exploration concession in order to study the potential for gas extraction in Val-de-Travers – an area which supplies drinking water to 70 per cent of the canton’s population. Although both conventional and shale gas were believed to be present, the company officially only intended to evaluate the conventional resources. Nonetheless, political opposition arose to the planned drilling project in the communes concerned. Public protests and parliamentary initiatives ultimately led, in 2014, to the adoption of a moratorium on all gas extraction projects. There are now plans to introduce a ban in a coming revision of the law.

In Canton Vaud, the granting of exploration concessions has been suspended following the adoption of a moratorium on fracking projects in 2011. This was prompted by a parliamentary motion criticizing inadequate scientific knowledge, excessive risks and a lack of coordination at the national level. Previously, however, exploration concessions had been held by three gas companies, one of which was also granted a drilling permit. These drilling operations have been suspended. For the time being, however, there are no plans to introduce a definitive ban.

In Canton Bern, two companies hold exploration concessions, though no specific fracking projects are planned. When parliamentary efforts failed to persuade the cantonal government to ban such projects, a popular initiative was launched by the Green Party [Fig. 1]. At the same time, a parliamentary motion was submitted, and the government ultimately approved the introduction of a ban. This is to be incorporated in the forthcoming revision of the Mining Rights Act.

The aim of our analysis was to elucidate the factors driving these policy responses (regulations, granting of concessions, moratoriums and bans). We therefore investigated the coalitions of actors and their respective strategies. For each canton, we identified the collective actors involved in the policy process – parties, interest groups from business and civil society, government agencies and representatives of academia. Also included in each list were actors with decision-making powers in relation to fracking. The lists thus comprised 25 (Vaud), 27 (Bern) and 34 (Neuchâtel) actors. In a survey, these actors were asked to indicate their policy positions with regard to fracking and to specify their relations with and assess the influence of other actors. With this data, it was possible to reconstruct the various coalition structures.

Given the similarity of the regulatory frameworks, it is scarcely surprising that a comparable picture emerges for all three cantons: in each case, a relatively large coalition of actors advocates a moratorium or even a ban on fracking (anti-fracking coalition). This includes, in each case, the centre-left parties – all parties except the Liberals (FDP) and Swiss People’s Party (SVP) – local and cantonal conservationist and environmental groups, municipal governments, cantonal agencies and individual federal offices (e.g. Federal Office for the Environment). Opposing the large anti-fracking coalition in all three cantons is a smaller group which regards fracking as less problematic and does not wish to see the technology banned (anti-ban coalition). This coalition includes, in particular, the gas companies interested in fracking projects, the FDP and the SVP (except in Canton Neuchâtel), as well as cantonal business organizations (only in Canton Vaud) and individual federal offices (e.g. Federal Office of Energy).

The fact that there are no plans for a definitive ban in Canton Vaud – in contrast to Bern and Neuchâtel – is attributable to various factors. Firstly, the anti-ban coalition in this canton is stronger than in the other cantons. Thus, its influence on the policy process amounted to almost 40 per cent, compared to an influence of around 30 per cent for its counterparts in Bern and Neuchâtel [Fig. 3]. Secondly, the issue is generally less contentious in Canton Vaud; for example, there has been no mobilization of the public via protests (as in Neuchâtel) or a popular initiative (as in Bern). In addition, the polarization between the anti‑fracking coalition and the anti-ban coalition is less marked, and the coalition boundaries are less well defined.

The conflict lines between the coalitions are particularly pronounced in Bern. In addition, there is a lack of agreement between the companies and the right-wing/business-friendly parties within the pro-development coalition. But without a unified coalition, actors in policy processes generally have no prospects of success, and so it is scarcely surprising that the more unified and stronger anti-fracking coalition prevailed in Bern. In Neuchâtel, the high level of agreement within the coalitions indicates why it would have been difficult to achieve a compromise solution, and why the stronger coalition was successful [Fig. 4]. The degree of between-coalition disagreement and of within-coalition agreement were decisive factors underlying the differing outcomes – the adoption of a moratorium in Canton Vaud and the decision to ban fracking in the other two cantons.

Fig. 4: Average values for agreement (green) and disagreement (red) within and between coalitions. The values are to be interpreted as follows: within the anti-fracking coalition in Canton Neuchâtel, for example, the level of agreement is 24 per cent, and disagreement 2 per cent; 100 per cent agreement would be reached if all actors stated that their policy positions coincided with those of all other actors within the coalition.

“Not in my backyard”

Along with coalition structures and conflict levels, technical information exchange is also a key factor in policy decisions. For political actors, challenges are posed by the need to address new, scientifically and technically complex issues. A decisive role in the provision of expert knowledge is thus played by scientific institutions. In the face of uncertainties, political actors are likely to favour the precautionary principle: if adverse effects for human health and the environment cannot be ruled out, a new technology will often be subjected to a moratorium or ban, until new scientific findings become available. This approach was observed in all three cantons.

The research results outlined here suggest that, in the future, fracking is unlikely to be employed for gas extraction in Switzerland. Opposition to this technology, which is doubtless also largely attributable to adverse media coverage in the US, extends far beyond environmental groups and the Green Party. In Switzerland, as well as being more numerous, anti-fracking actors can draw on specific political instruments to oppose projects of this kind. The opportunities afforded by direct democracy and the federalist system mean that very broad majorities are required to ensure that a political project can be successfully implemented. Matters are further complicated by the Nimby (not in my backyard) phenomenon: even if fracking projects were approved by a majority of actors in Switzerland, very few people would wish to have drilling operations located in their neighbourhood. Local opposition to such projects is highly likely, as shown by the case of Neuchâtel. Ultimately, population density and dependence on groundwater in the Central Plateau are probably just too high, while the economic potential – given the obstacles described above – is too low.

In their opposition to fracking, Switzerland’s cantons do not stand alone. In France, for example, the method has been banned, and prohibition is also under discussion in Germany. Likewise, fracking is no longer permitted in Scotland and Wales, and while the central government in London explicitly supports the exploitation of shale gas, fracking projects in England also founder on local opposition. In the US, in spite of the fracking boom, bans have also been introduced at the local or regional level. In New York State, for example, fracking has been prohibited since the end of 2014.

Eawag factsheet on fracking
Eawag and the Eawag/EPFL Ecotox Centre have issued a factsheet on hydraulic fracturing, which provides an overview of the current state of scientific knowledge and highlights potential environmental impacts.
Factsheet

Created by Manuel Fischer und Karin Ingold
Share with others: