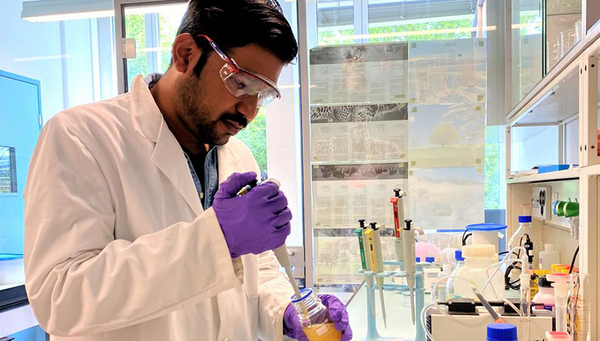 Never did Jagannath Biswakarma think that a Tweet about one of his academic articles would receive attention from world-leading media outlets. Yet, that is exactly what happened and how his work was promoted internationally.

Bioavailable iron is essential for all living organisms. Iron deficiency amongst plants  influences agricultural production. In his doctoral work with Stephan Hug and Janet Hering at the aquatic research institute Eawag, Jagannath Biswakarma (now postdoc at Eawag) proposed alternative mechanisms by which plants or microbes can uptake iron directly from minerals under iron-limiting conditions. Eawag researchers conducted this study in close collaboration with the University of Vienna, Austria.

This research could assist farmers in the Global South, where climate change is heavily affecting agricultural productivity. For example, increasingly, dynamic environmental conditions lead to fluctuations in groundwater levels. These fluctuations in water availability change the chemical conditions and microbial activity in soils and water; thereby plausibly affecting the iron availability in plants. Jagannath’s research explains how plants might uptake iron from minerals in adverse conditions, producing the nutrients people and animals need to survive.

Jagannath Biswakarma reported on Twitter about the alternative mechanisms and the potential impact of his research on agriculture in the Global South, especially South-East Asia and Latin America. His tweet caught the eye of the Forbes journalist, Andrew Wight. Wight is an Australian science journalist based in Medellin, Colombia. He was interested to know from Biswakarma directly about his research.

Interviews with Wight led to an article published on September 30, 2020, on Forbes. Janet Hering tweeted about its publication. Jagannath Biswakarma re-tweeted her Tweet, which led to the discovery of the Forbes article by Arun Budhathoki, a Nepalese journalist and Editor-in-Chief of the Kathmandu Tribune. His work appears in The Guardian, Financial Times, and The Diplomat Magazine, where following an article about Jagannath Biswakarma’s research in the Kathmandu Tribune, an article about hiss work was published. Since then, articles about his research have been published in six other media outlets. And the interest in it is only continuing to grow.

Clearly, social media can impact the dissemination of scientific research. It can ensure that scientific work is not only seen and read but also talked about. As a result, the research can have an impact more widely than that possible by academic publications alone. In the long term, the research results can also influence practitioners who need this knowledge, such as agriculturalists and policymakers in countries facing increasingly adverse environmental conditions.

Dissolution of Fe(III) phases is a key process in making iron available to biota and in the mobilization of associated trace elements. Recently, we have demonstrated that submicromolar concentrations of Fe(II) significantly accelerate rates of ligand-controlled dissolution of Fe(III) (hydr)oxides at circumneutral pH. Here, we extend this work by studying isotope exchange and dissolution with lepidocrocite (Lp) and goethite (Gt) in the presence of 20 or 50 μM desferrioxamine-B (DFOB). Experiments with Lp at pH 7.0 were conducted in carbonate-buffered suspensions to mimic environmental conditions. We applied a simple empirical model to determine dissolution rates and a more complex kinetic model that accounts for the observed isotope exchange and catalytic effect of Fe(II). The fate of added tracer 57Fe(II) was strongly dependent on the order of addition of 57Fe(II) and ligand. When DFOB was added first, tracer 57Fe remained in solution. When 57Fe(II) was added first, isotope exchange between surface and solution could be observed at pH 6.0 but not at pH 7.0 and 8.5 where 57Fe(II) was almost completely adsorbed. During dissolution of Lp with DFOB, ratios of released 56Fe and 57Fe were largely independent of DFOB concentrations. In the absence of DFOB, addition of phenanthroline 30 min after tracer 57Fe desorbed predominantly 56Fe(II), indicating that electron transfer from adsorbed 57Fe to 56Fe of the Lp surface occurs on a time scale of minutes to hours. In contrast, comparable experiments with Gt desorbed predominantly 57Fe(II), suggesting a longer time scale for electron transfer on the Gt surface. Our results show that addition of 1–5 μM Fe(II) leads to dynamic charge transfer between dissolved and adsorbed species and to isotope exchange at the surface, with the dissolution of Lp by ligands accelerated by up to 60-fold.
See DOI
See Institutional Repository
Biswakarma, J.; Kang, K.; Schenkeveld, W. D. C.; Kraemer, S. M.; Hering, J. G.; Hug, S. J. (2020) Linking isotope exchange with Fe(II)-catalyzed dissolution of iron(hydr)oxides in the presence of the bacterial siderophore desferrioxamine-B, Environmental Science and Technology, 54, 768-777, doi:10.1021/acs.est.9b04235, Institutional Repository