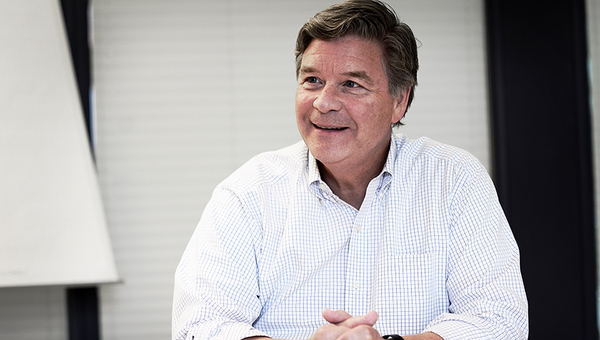 According to Jerald Schnoor, emerging challenges in the water sector like water shortage or micropollutants call not only for high-quality research but also for interactive collaboration between scientists and decision-makers. The eminent US environmental engineer is spending three months as an academic guest at Eawag.
Interview: Andres Jordi

Jerald Schnoor, what are you focusing on during your sabbatical here at Eawag?
In the directorate, along with Janet Hering, I’m mainly working on the development of a new Synthesis Centre – with a social, economic and technological emphasis – which would bring people with different backgrounds to Eawag. Here, scientists from around the world could come together to discuss their data with colleagues from different disciplines and gain new insights.

A kind of interdisciplinary ivory tower?
The Synthesis Centre should of course reach out to practitioners – the idea would be to collaborate with existing practice-oriented bodies such as the Water Agenda 21 network or the Fishery Advice Centre. They would feed practitioners’ concerns into research and communicate research findings to professionals and policymakers. So it would be a kind of transdisciplinary think tank, bringing existing knowledge together, and facilitating reflection on current and future challenges in the water sector.

“Every day, 15,000 substances are registered which could have ecotoxic
effects in waterbodies.”

What are the most urgent problems in this sector?
One big problem is the runoff of agricultural pesticides and fertilizers to surface waters. From Iowa (my home state), for example, large amounts of nitrogen are carried by the Mississippi River into the Gulf of Mexico. This leads to the formation of hypoxic areas along the coast, sometimes with toxic algal blooms. Worldwide, there are around 400 of these “dead zones”. This problem is likely to be exacerbated by climate change: according to our climate models, the Iowa Cedar Rivers Basin will get wetter in the future. Another major issue for industrialized countries is micropollutants. The US, for example, does not currently have a programme like the one launched in Switzerland to remove micropollutants by upgrading wastewater treatment plants. The American Chemical Society’s CAS Registry contains over 100 million substances, with around 15,000 new ones added every day – innumerable potentially ecotoxic substances which can end up in waterbodies. One big problem is the toxic by-products of chemicals used for water disinfection.

Where are disinfectants used?
Many developed countries are using reverse osmosis to treat wastewater so that it can be reused as drinking water. In the US, potable reuse is practised in some water-short areas like California and Texas. Here, new disinfectants are constantly being used, and some of the by-products of disinfection appear to be highly toxic. As these molecules can pass through the membranes used in osmosis, when you keep recycling the water they will accumulate.

“Many of the UN Millennium Development Goals were achieved,
but the sanitation target was not met.”

How can the problem of micropollutants be mitigated?
Firstly, we need to develop better screening methods – more high-throughput testing just so we can figure out what these chemical mixtures contain. Secondly, we need high‑throughput genome toxicity testing – both for ecosystems and humans – to figure out what the effects are. Only then can scientists really advise governments on how to deal with all these micropollutants and what screening tools should be used.

What are the main challenges for developing and emerging countries?
The fact that many people lack water for sanitation and hygiene is still the number one problem. It’s true that a lot of progress has been made with the UN’s Millennium Development Goals – in poverty reduction, for example. Just in the last 15 years, China has lifted 300 or 400 million people out of poverty. That has never happened before in the history of the world. But some of the targets set in 2000 were not met – and sanitation was one of them. That’s why it’s so important that an agreement on a follow‑up programme – the post‑2015 Sustainable Development Goals – was recently signed at a UN summit in New York.

When I see the advances that have been made in reducing poverty and increasing access to safe water, there is much to be optimistic about. Over the past 15 years, NGOs working all around the world have accomplished an incredible amount – in combating malaria, tuberculosis, smallpox and polio. In fact, perhaps the greatest single accomplishment in recent years has been the collaboration between NGOs and governments internationally – most impressively in the case of the Millennium Development Goals.

“Collaboration between NGOs and governments internationally is
one of the greatest accomplishments.”

And what about environmental achievements?
What I see as our greatest environmental accomplishment in recent decades was the Montreal Protocol to protect the ozone layer, which came into effect in 1989. Chlorofluorocarbons in the stratosphere have started to decrease. If they hadn’t been banned, they would now be by far the most potent greenhouse gas – over 10,000 times more potent than CO2 – and we’d have more than twice the amount of warming that we have right now.

What major problems will we face in the future?
Climate change will alter water availability. The models suggest that wet areas will get wetter, with flooding likely to increase. At the same time, arid areas will get drier and water shortages will become more acute. Also, at some point, there’ll be two or three billion more people to feed worldwide.

I’m also concerned about newly emerging pathogens – antibiotic resistance genes appear to be accumulating in the environment, evolving and spreading in ways that we don’t yet fully understand. Today, global movements of people and goods make it easy for pathogens to spread around the world. That also applies to invasive species, but the jury is still out on how much of a problem that is. It certainly changes the structure of the ecosystem because invasive species replace native species, but it’s not clear to what extent ecosystem function is changed. I think more research is needed on that as well.

Is the scientist’s role confined to generating new knowledge?
We can’t make laws or rules. But as a scientist, I see my role as engaging in policy debates and helping to inform decision-makers – with the best science possible. That means not just delivering a report, but more interactive collaboration. Some scientists may be less willing to speak out. Eawag’s plans for a Synthesis Centre could provide a suitable platform for this kind of interaction.

Large-scale environmental observatory
One of Jerry Schnoor’s current research projects is concerned with environmental changes and health. In the Iowa Cedar Rivers Basin – a watershed larger than Switzerland – he and his colleagues are investigating how changes in land use and climate affect water quality and availability in the region. Using real-time sensors, they are collecting hydrological, geophysical and chemical data for agriculture, soil and water quality modelling. “The aim,” says Schnoor, “is to find out how agriculture can best adapt to future conditions.”

PCB cycling and new exposures
In a recently launched project, Schnoor and his team are studying the environmental fate of polychlorinated biphenyls (PCBs). Although these carcinogenic compounds have long been banned in the US, they still occur as unintentional by-products (inadvertent PCBs) – e.g. in paint manufacturing processes. In addition, some metabolites still circulating have been found to be more toxic than the original compound. As well as investigating exposure routes, the researchers are exploring how the cycling of these pollutants can be stopped.

Renowned scientist on sabbatical at Eawag

Jerald Schnoor (65) is an expert in aquatic chemistry, water quality modelling and sustainability, whose research interests include groundwater contamination, phytoremediation, and causes and effects of climate change. He teaches at the University of Iowa (UI), where he is Professor of Civil and Environmental Engineering, and also of Occupational and Environmental Health. Schnoor is a co-founder and Co‑Director of the UI Center for Global & Regional Environmental Research. He has served on the Science Advisory Board of the US Environmental Protection Agency (EPA) and is a member of the US National Academy of Engineering. Until 2014, he was also Editor-in-Chief of Environmental Science & Technology.