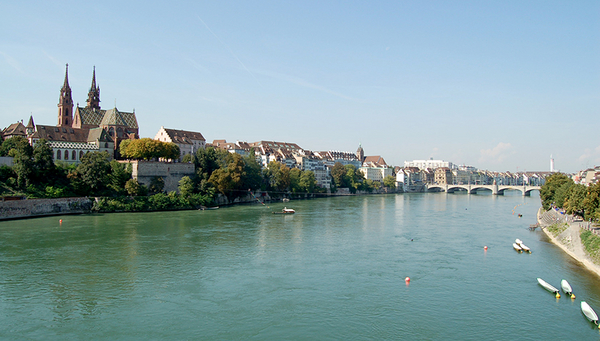 What is the contribution of upstream areas to micropollutant loads in the Rhine at Basel and Düsseldorf? How effectively do authorities and water suppliers collaborate on management and regulation across national boundaries? An interdisciplinary approach developed by Eawag scientists can help to identify deficiencies.

Pharmaceutical residues discharged from a wastewater treatment plant in the Bernese Oberland can adversely affect Rhine water quality in the Netherlands just as much as pesticide runoff from croplands in the Alsace. Micropollutants contaminating downstream water resources can pose problems for human health. To ensure the safety of water supplies from the Alps to the North Sea, collaboration is thus required between all actors across the Rhine basin – including suppliers, policymakers and polluters. The extent to which such connections exist was investigated by Eawag natural and political scientists, together with partners from the Luxembourg Institute of Socio‑Economic Research (LISER). The interdisciplinary project team adopted a spatial approach, using new visualization methods. According to Karin Ingold of Eawag’s Environmental Social Sciences department, “Cooperation on the issue of micropollutants is established throughout the catchment area. But we were surprised to find that there are indeed areas where regulation is inadequate and there’s little collaboration between the water suppliers affected and the actors responsible.” One such deficiency identified by the project concerns the lack of connections between Swiss water suppliers and actors in border regions of Austria and Liechtenstein.

Ingold, who also holds the Chair of Policy Analysis and Environmental Governance at the Bern University Institute of Political Science, explains: “Our study is based on the idea that effective management of natural resources depends on the fit between the biophysical and the governance system.” Water protection is particularly complex in the case of transboundary rivers such as the Rhine. The researchers focused on micropollutants, analysing the distribution of sources and assessing how such pollution is managed by water suppliers in Basel and Düsseldorf. The interdisciplinary project thus investigated both the physical and the regulatory aspects. “One of the challenges,” says Ingold, “was to make these two dimensions comparable, so as to identify deficiencies in the system.”

In the natural scientific part of the study, mass flow analysis was used to determine micropollutant loads along the river network. Four model compounds were selected – two herbicides (isoproturon, S‑metolachlor) and two pharmaceuticals (carbamazepine, sulphamethoxazole) which are widely used and are relevant for drinking water production. In a first step, modelling was performed to produce source maps showing the amounts applied or consumed. The calculations were based on sales data for the various substances, combined with population density for the pharmaceuticals and application area for the herbicides. In a second step, the scientists estimated the loads entering the river network via runoff from agricultural land or discharges from wastewater treatment plants. Lastly, the so-called physical impact zones were determined; these indicate the areas contributing a given percentage of the total load affecting a point of interest – in this case, the cities of Basel and Düsseldorf.

In parallel, using social network analysis, the political scientists assessed the extent to which the water suppliers concerned are embedded in governance systems. Water suppliers in Basel and Düsseldorf were interviewed to determine their contacts with authorities, associations and other actors involved in the management of micropollutants. The management network was found to consist of 40 actors in the case of Basel and 15 for Düsseldorf. Also investigated were the regulation networks, comprising actors participating in environmental policymaking at the national, regional and local level. By visualizing the location of the actors and their ties with each other, the researchers produced a spatial network map, showing the water suppliers’ areas of competence.

Good overlap – with some misfits

The spatial network map was then superimposed on the physical impact zones. The source areas largely responsible for micropollutant loads at the Basel and Düsseldorf sites include three to four different countries. It is clear that the networks are influenced by national boundaries: while the water suppliers in Basel are well connected to the national (Swiss) network and to actors in Germany, they lack connections to actors in Liechtenstein and Austria. In Düsseldorf, the water supplier has no connections to French actors, and only one connection with a Swiss scientific institute.

The researchers conclude that there is a considerable overlap between the social (regulatory/management) and ecological areas. However, the visualizations also highlight the existence of spatial “misfits”. For Ingold, this is precisely the benefit offered by the interdisciplinary approach: “Authorities and policymakers can see at a glance which areas already lie within their own jurisdiction, and where closer (international) cooperation could be worth pursuing.”

Water governance around the world
On its website, the Global Water Partnership (GWP) has published an interactive map showing water governance results to which it has contributed. The map gives details of regional, national and international agreements, such as new water policies, national adaptation plans, transboundary management agreements or investment strategies, which have improved the management of water resources.

Physical impact zones of the two herbicides isoproturon (A) and S‑metolachlor (B) and the pharmaceutical carbamazepine (C) for the water supplier in Düsseldorf. Together, these areas account for 95% of the total load at the site of interest. The red, yellow and light blue areas each contribute 25%, and the dark blue area 20%.
Source: Eawag

Spatial network map of Basel water suppliers’ areas of competence for the regulation of micropollutants: the larger the number of connections to actors in an area, the higher its elevation. The comparison with physical impact zones indicates that the water suppliers concerned lack connections with certain areas, e.g. in Liechtenstein or Austria.
Source: Eawag