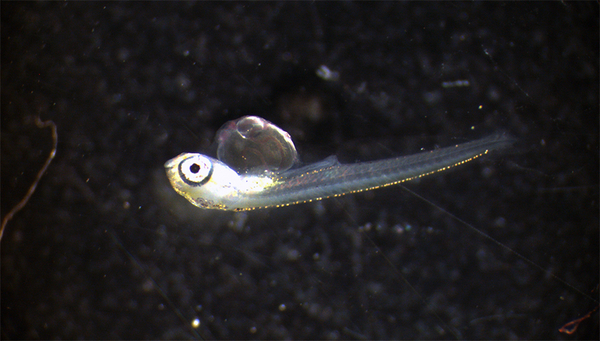 Some insecticides, such as the neonicotinoids, have an effect on the nervous systems of organisms. But not only, as shown by the results of a new study in which Eawag scientists took part. And: the resulting damage can be very different, depending on the species of fish.

The insecticide imidacloprid is one of the strongest insect toxins and belongs to the group of neonicotinoids. Since 2019, the use of imidacloprid, along with two other substances in this group, is only allowed in greenhouses, as this substance is one of those responsible for the death of bees. Imidacloprid is also very toxic for aquatic organisms; as is stated in the manufacturer’s certification reports.

The effects of these toxins on fish is shown in a recently published study by the group led by Kristin Schirmer, head of the Environmental Toxicology department at Eawag and professor at the EPF Lausanne, and her colleagues in the Environmental Chemistry department at Eawag, Messina University and the University of Bordeaux. The researchers tested the effects of imidacloprid in developing Japanese ricefish, also known as medaka, as well as in zebrafish. Both species of fish serve as model organisms in toxicological research.

Although imidacloprid is a neurotoxin, and in insects causes chiefly behavioural alterations, this effect was less noticeable in the fish than expected. But: “The effects on the fish were much more complex than simply neurotoxic,” says Schirmer. The fish also suffered deformations, stunted growth and pathological tissue changes. An explanation as to why the neurotoxin has such an effect on the development of the fish is not yet known.

In addition, the form of the adverse effects varied greatly between the species: the Japanese ricefish was affected ca. one thousand times more severely than the zebrafish. One reason may be that the medaka remain longer in the developing stage, and thus are exposed as larva longer than is the case in zebrafish. According to the researchers, however, this is not a complete explanation of all the differences. “We simply know too little about how various species react to insecticides,” says Kristin Schirmer.

Neonicotinoids are widely used insecticides that have frequently been found in freshwater with concentrations ranging from ng to μg/L. It is known that these compounds impact non-target invertebrates, such as bees and gammaridae, in terms of toxicity and behavior, but impacts and species differences on vertebrates such as fish are little explored. The aim of this study was to investigate and compare the effects of one widely used neonicotinoid, imidacloprid, on development and behavior of two fish model species: Zebrafish (Danio rerio) and Japanese medaka (Oryzias latipes). Fish were exposed for 5 (zebrafish) and 14 (medaka) days from 0.2 to 2000 μg/L imidacloprid by aqueous exposure. Survival, development, behavior and histological features were monitored and organism-internal concentrations and biotransformation products measured. Imidacloprid caused sublethal effects in both species but the effects were much stronger in medaka with deformities, lesions and reduced growth being the most prominent impacts. Due to the overall longer time of development, time-integrated exposure of medaka was about 2-fold higher compared to zebrafish, potentially accounting for parts of the sensitivity differences. Our results underline the importance of taking species sensitivity differences into account especially when considering that medaka responded at imidacloprid concentrations that have been measured in the environment.
See DOI
See Institutional Repository
Vignet, C.; Cappello, T.; Fu, Q.; Lajoie, K.; De Marco, G.; Clérandeau, C.; Mottaz, H.; Maisano, M.; Hollender, J.; Schirmer, K.; Cachot, J. (2019) Imidacloprid induces adverse effects on fish early life stages that are more severe in Japanese medaka (Oryzias latipes) than in zebrafish (Danio rerio), Chemosphere, 225, 470-478, doi:10.1016/j.chemosphere.2019.03.002, Institutional Repository
Created by Stephanie Schnydrig
Share with others:

The larvae of the Japanese medaka developed pathological malformations when exposed to Imidacloprid: The picture shows a larva with heart and yolk sac deformities at an imidacloprid concentration of 2000 µg/L (Photo: Jérôme Cachot, University of Bordeaux).