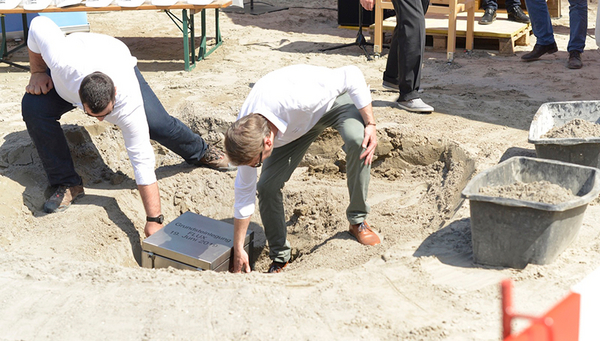 A large metal box was buried in the foundation of Eawag's new Flux building in Dübendorf last Wednesday, 19 June.

Among other things, an ipad with charger, the digital construction plans, but also a Dübendorf tie, a Dübendorf pocket knife and symbolic objects from research are well sealed inside. The box was buried by Eawag Director Janet Hering, Dübendorf City President André Ingold, former President of the ETH Board Fritz Schiesser, and representatives of the fsp architectural office and the general contractor Halter.

Some 50 guests took part in the event in the excavation pit. Future users of the CHF 30 million building, which will provide urgently needed space for research and training, in particular for the transfer of synthesis knowledge into practice, were also present.