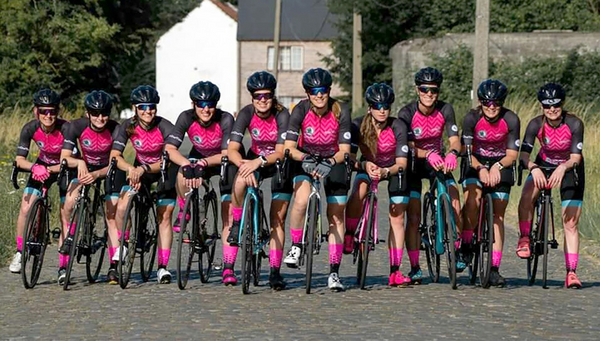 A team of ten female cyclists is currently undertaking the hardest ride of their lives, riding all stages of this year’s Tour de France route—albeit one day ahead of the men’s race. Amongst the cyclists is Sara Beck, a postdoc in the Environmental Microbiology department.

The world’s most famous bike race – the Tour de France – is well underway. From 6th to 28th July, it’s a race against each other as well as against time for the professional cyclists, who will cycle almost 3,500 kilometres through 21 stages and 65 climbs and passes. Women are not present in this spectacle, however. What is more, there is no staged race in women’s pro-cycling that comes close to garnering the attention that the Tour de France gets, let alone one that rewards the winner with anything like the same prize money. This is an unfair situation, says Team InternationElles, which consists of ten female amateur cyclists including Sara Beck. The women come from the USA, England, Scotland, Australia and The Netherlands, and are between 27 and 46 years old.

This is the reason they set off from Brussels on 5th July on the first etappe of just over 200 kilometres. Since then they have been cycling one day ahead of the male professionals, through northern France and over the passes of the Pyrenees and the Alps. Constantly in their sights is the hope that their actions will raise awareness among the public to start asking “Why on earth is there no Tour de France for women?”.

Although a multi-day race for women took place in France in 1955, that has boiled down to a single-day race of 120 kilometres today. “That’s a joke”, says Sara, who goes on to say, “As a triathlete I am used to the idea of men and women competing against each other on the same day and on the same route”. That’s why the situation in cycling is incomprehensible, as there are some phenomenal female endurance athletes, as can be seen from trail running and ironman events, for example.

Sara started training for the Tour route around five months ago, pedalling a total of around 6,000 kilometres in the Alps in preparation. Nevertheless, now with the last few stages ahead of her, she feels she should have started her training a lot earlier. The problem is not only the fatigued legs, but also the constant sitting in the saddle and the issues of trying to get enough sleep and enough to eat. In addition, the women’s team is not in the same luxury accommodation along the route as the men, but is staying in Airbnb places, where they are cooking for themselves and doing their own laundry.

And what is Sara looking forward to the most about next Saturday in Paris? “Riding down the Champs-Élysées towards the finish with the rest of the team”, she says. “And of course, to the party afterwards. We need to have some energy in reserve for that.”