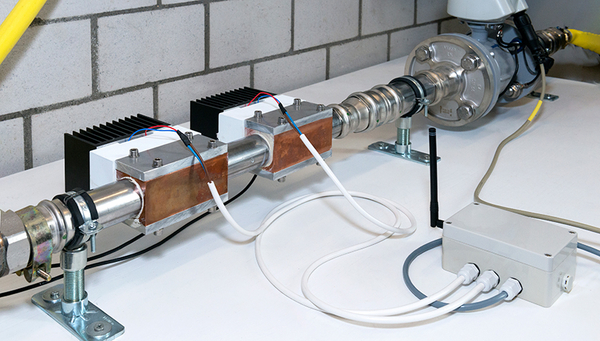 A team of engineers from ZHAW and Eawag has developed a smart-sensor solution for monitoring drinking-water mains. The system supplies its own energy and sends the data by wireless transmission.

All over the world, a great deal of water is lost every year because of problems in the water infrastructure. Efficient monitoring of water distribution networks is therefore the subject of research papers. The ZHAW School of Engineering, together with the aquatic-research institute Eawag, have developed a battery-free solution, which monitors water resources in real time. ADAWIM stands for “Autonomous and Distributed Architecture for Water Infrastructure Monitoring” and is based on a wireless, intelligent sensor technology that is energy self-sufficient.

The system does not come into contact with water, but rather draws its energy chiefly from the temperature differences in the environment, for example between a water or wastewater main and the earth. In one variation, highly efficient solar cells are used. This energy harvesting enables devices above and below ground to be used in the water infrastructure. “Energy harvesting based on temperature differences is, to be sure, less efficient than solar energy, but it can be put to use nearly everywhere,” explains project leader Marcel Meli of the ZHAW Institute of Embedded Systems. “The combination of various heat sources – depending on location and season – assures a continuous energy supply.” Using this method, the system can acquire the needed power even deep within the earth.

The system is already in use at Eawag’s demonstration site as well as in Winterthur’s municipal utilities, which have placed their infrastructure at the researchers’ disposal. The research team has shown everywhere that ADAWIM can supply enough energy within the water infrastructure to measure parameters like water flow or soil moisture. The data gathered are prepared locally and sent to a gateway by wireless transmission. This then transmits the information – in real time or at a later time – to a server for further preparation and visualisation.

As part of the “Zero Power Water Prize” of the EU research programme Horizon 2020, Marcel Meli and his team were able to demonstrate the ADAWIM solution in Brussels as one of five finalists in the competition. Now that the demonstration of the system prototype in the operating environment has proved so successful, the researchers want to find a business partner so that they can move on to the next stage of their smart-sensor solution: the development of a marketable product.

The prototype of the ADAWIM sensor in the Eawag testing hall. (Foto: Patrick Cipriani / ZHAW)

Wireless measurement of the flow in the test assembly. (Foto: Patrick Cipriani / ZHAW)

From the difference in temperature – here at the Winterthur municipal utilities between a cold water main and the surrounding environment – the energy needed for the sensor and data transmission is obtained (Foto: Patrick Cipriani / ZHAW)