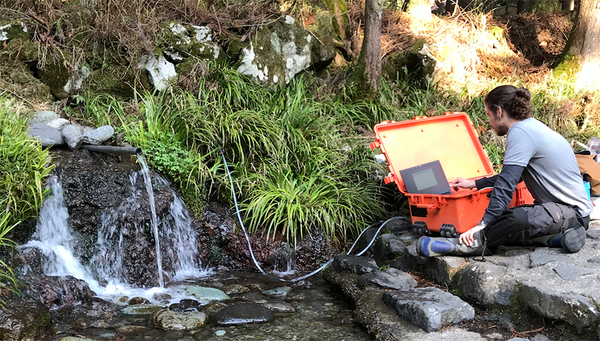 Environmental DNA analysis of microbial communities can help us understand how a particular region’s water cycle works. Oliver Schilling, Professor at Eawag and the University of Basel, recently used this method to examine the water cycle on Mount Fuji. His results have implications for Switzerland as well.

Where does the water come from that provides drinking water to people in a particular region? What feeds these sources and how long does it take for groundwater to make its way back up to the surface? This hydrological cycle is a complex interplay of various factors. A better grasp of the system allows us to understand, for example, why pollution is worse in some spots than others, and it can help us implement sustainable water management policies and practices.

Environmental DNA (eDNA) provides some important data to improve our understanding. In combination with the evaluation of other natural tracers – noble gases, for example – this microbial data provides important glimpses into the flow, circulation and functioning of complex groundwater systems. “It’s a vast toolbox that’s new to our field of research,” says Oliver Schilling, Professor of Hydrogeology at the University of Basel and at Eawag. Quantitative hydrogeology maps out where and how quickly new groundwater will accumulate.

Starting in 2018, Schilling conducted various measurements on Mount Fuji in Japan in order to determine where spring water comes from – that is, where the groundwater flows through before it arrives back at the surface and forms the hundreds of pristine natural springs which are scattered around Mt Fuji. His results are published in the first edition of the journal Nature Water, which just came out.

The choice of this particular mountain was no coincidence: “The geological setting of Mount Fuji is unique on Earth since it is the only place where three tectonic plates meet up like this. This makes the groundwater system highly complex and therefore poorly suited to investigation using the standard methods,” Oliver Schilling explains.

It was thanks to a Japanese colleague that he arrived at the idea of examining microbial eDNA in the region. “He told me about water sources on Mount Fuji that exhibit noteworthy signatures, namely that the eDNA contained in the water shows the presence of organisms that can only grow at a depth of 500 to 1,000 meters,” he recalls. This is an indicator that some of the source water comes from deep groundwater. “This was the first indication that microbial eDNA might provide some clues as to the groundwater’s flow trajectory when combined with other, independent tracers such as noble gases,” continues Basel hydrologist.

His curiosity was piqued. During his time as a postdoc at the Université Laval in Québec, he traveled to Japan during his vacations and conducted various measurements together with his Japanese colleague. He also delved deep into the existing scientific literature, which is primarily in Japanese. Along with eDNA, Schilling also analyzed two groundwater tracers with higher incidences due to Mount Fuji’s unique geological setting: the noble gas helium and the trace element vanadium. “All three natural tracers tell the same story: there is systematic deep circulation of the water within Mount Fuji. Such analyses are the key to understanding the system,” Schilling concludes.

Potential findings for Switzerland, too

This new application of tracers can be used to examine groundwater systems all over the world. In Switzerland, for example, it can be applied to determine where the water comes from that is pumped out of the ground for drinking water. “A large proportion of eDNA from cold-loving microbes in the groundwater, for example, would indicate that meltwater from snow and glaciers forms a substantial proportion of the sourced groundwater,” Schilling explains.

With an eye to the future, this means: “If we know the importance of these natural water reserves, we can look for alternatives ahead of time in order to shield affected regions from seasonal water shortages as much as possible,” the hydrogeologist continues. As a result of climate change, in Switzerland glaciers are melting and snow is reducing, which means that these important sources of water for streams and groundwater are slowly disappearing. This will negatively affect the water availability particularly in the more and more frequent hot and dry summer months.

One possibility to prevent severe water shortages in summer would be to collect more rainwater in reservoirs during the winter half year, for example by artificially enhancing groundwater reservoirs or adapting how above-ground reservoirs are managed. “The analysis of microbiological eDNA offers us a new tool for better calibrating the hydrological models used in groundwater management,” Schilling explains. This in turn is an important part of making realistic prognoses for water quality and availability and allows a sustainable, long-term planning for the management of groundwater – our most valuable and abundant source of drinking water.

Created by Noëmi Kern, Universität Basel
Share with others: