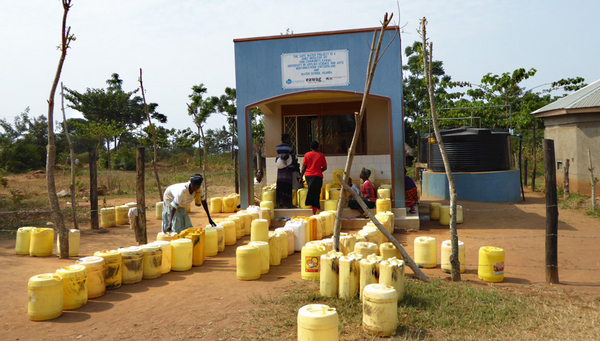 Ultrafiltration is one of the techniques currently used for disinfecting water – viruses and bacteria are reliably retained by a membrane with extremely small pores. For more than ten years, Eawag has successfully been carrying out research to determine how this method can function using the effect of gravity on water instead of high pressure, cleaning and chemicals. These new discoveries are being applied in increasing numbers of ways. In addition to decentralised drinking water purification, Eawag is now researching uses in areas such as greywater recycling and pre-treatment of seawater for desalination.

Three schools in the vicinity of Lake Victoria in Uganda have, for the last few years, not only been learning centres, but have also been operating water kiosks where villagers can buy treated drinking water. Simple membrane filtration systems, developed at Eawag and installed together with the University of Applied Sciences and Arts Northwestern Switzerland, remove turbid material, bacteria and viruses from the water, thus ensuring that significantly fewer people are drinking polluted water. As a result, diarrhoea in children under five years of age has decreased by 69%, and in adults by an astounding 78%. Maintenance of the membrane filters is very easy; they function without permanent addition of chemicals and require no energy input – except for pumping the water from Lake Victoria to the station. “Whereas conventional ultrafiltration systems function with high pressure and have to be regularly cleaned out, our filters work by gravity alone”, explains Regula Meierhofer from Eawag’s Sandec department. “Cleaning is not necessary.”

When Eawag began its research into membrane filtration over ten years ago, no one expected that it would work under these conditions. “As part of an EU project, we investigated how one could simplify membrane filtration for decentralised water purification in such a way that no cleaning was necessary”, recalls Wouter Pronk from the Process Engineering Department. “We assumed that we would have to treat the water before filtering so as not to clog the pores.” But then Eawag researcher Maryna Peter realised something surprising in her work for her dissertation: if the filters function using only the effect of gravity effect on the water, although the permeability of the membrane decreases during the initial five days, it remains stable at a low level thereafter – even after several months of use. River water, for instance, flows at a stable 4 to 5 l/m2 per hour. Thus, gravity-driven membrane (GDM) filtration was born.

When ultrafiltration takes place using only gravity, the flow rate stabilises after a few days. The higher the content of organic matter (TOC) the lower the rate of water filtration.
(Peter-Varbanets et al. 2010)

Biofilm as the determining factor

The fact that the pores don’t become clogged was the object of further study by the researchers. Various analytical imaging methods have shown that a film builds up on the surface of the membrane. This is not homogeneous, but has an irregular pitted structure. Biological and chemical investigations of this film showed that naturally-occurring aquatic microorganisms settle on the membrane surface and feed on organic matter in the water. Higher organisms, protozoans for instance, in turn find a welcome meal in the bacteria. This microcosm ensures that new cavities always form on the filter surface, which enables the water to pass through. “We have found that this biofilm is more compact and less porous if it consists only of bacteria,” says Pronk. If, on the other hand, higher organisms are present that feed on the bacteria, the biofilm is more porous, and more water can flow through. The fact that these biological processes are a crucial factor is demonstrated by filtration processes involving the addition of the poison sodium azide, which kills the organisms in the biofilm. In this case the flow rate does not stabilise and the filter eventually clogs up completely.

Optical coherence tomography of the biofilm on the membrane: A biofilm with protozoans and metazoans (left), which feed on bacteria, is more heterogeneous and porous than a biofilm consisting only of bacteria (right).

Suitable for limited filtration of greywater

The applications for gravity-driven membrane filtration are many. Eawag researchers have therefore studied how well the GDM filtration functions with water of varying quality. They have shown that diluted wastewater or greywater from the kitchen, the shower and the sink can be filtered using gravity alone. Admittedly, the flow rate does sink markedly in such circumstances – the biofilm becomes more compact and less porous. One reason for this is the accumulation of organic matter. The biological activity in the biofilm reduces because less oxygen is dissolved in greywater. “Greywater systems have to be aerated”, explains Pronk. “The water also has to remain in the system for longer so that the microorganisms can break down the organic matter.” Using such GDM bioreactors, the researchers aim to achieve a flow rate of from 1 to 2 l/m2h in the laboratory and in field tests in the “Waterhub” of the Nest Experimental Building.

Hand-washing water in the Blue Diversion Toilet, a closed-system urine-separating toilet that was developed at Eawag, is purified using a GDM: the greywater is passed over the membrane filter in a closed system and then protected from recontamination using electrolysis. Active charcoal removes the light colouration. Purified in this manner, the recycled water can be used with confidence by the toilet users for washing their hands. GDM filtration also shows promise for the pre-treatment of ocean water in desalination plants, as shown by experiments done by Eawag, the University of Applied Sciences Rapperswil and researchers in Singapore. If the water is pre-treated using GDM instead of the usual membrane filtration, the ensuing reverse osmosis is more efficient. The biofilm breaks down some of the organic matter such as humic acids or biopolymers, and the breakdown products can pass unimpeded through a pure membrane because of their smaller size.

Removal in GDM compared to clean UF membrane: Small organic compounds such as humic acids or biopolymers, which can pass through an ultrafiltration membrane, are kept back to some extent in GDM filtration. They are broken down by the microorganisms in the biofilm.
(Ding et al. 2017)

Because the process is very simple, needs hardly any maintenance and uses no chemicals or electricity, it is ideal for purifying drinking water in regions with poor infrastructure. The development of a water filter for households was thus the Eawag researchers’ original idea. Together with the design department of the Zurich University of the Arts, they had already developed a prototype in 2011 and carried out field tests in Kenya and Bolivia. “The production costs for the household filter ‘Safir’ are, however, too high for the target group in developing countries”, explains Regula Meierhofer. In collaboration with Maryna Peter, who is now a researcher at the FHNW, she therefore developed a larger system at the community level, which has been undergoing testing in Uganda since 2016. This water kiosk project, “Gravit’eau”, was awarded the prix-eco.ch in 2017. Two further water kiosks are currently being built and local experts will be trained to be on hand for maintenance and repair. With the income from the sale of the water, not only can the running costs and the salaries of the kiosk operators be financed, but the operators can also set money aside. Whether this will be sufficient to change the membrane after around ten years remains to be seen. “Political guidelines stipulate that the price of water cannot be raised”, comments Meierhofer. This is the case even though the population would be prepared to pay more.

Prototype of the GDM household filter in a field test in Peru. With a membrane surface of 0.5 m2, the filter can supply up to 30 litres of drinking water a day – without chemicals or filter cleaning. (Eawag)

Structure of the GDM drinking water preparation system in the water kiosk in Uganda.