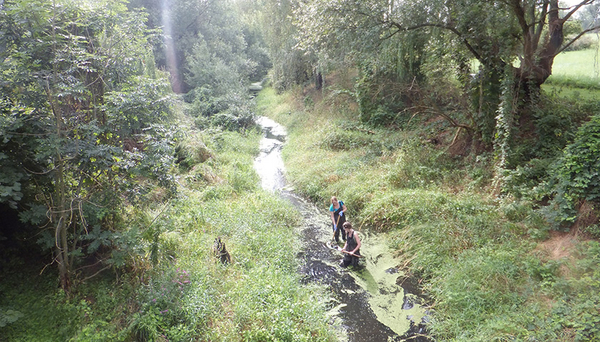 River sediment normally acts as a sink for hormones that are dissolved in the water. However, if they are disturbed, for instance when flooding occurs, these substances can end up back in the water column – with potentially negative consequences for the whole ecosystem.

Natural, human oestrogens, as well as synthetic substances such as the contraceptive pill, pesticides and industrial chemicals, are transported mainly via our wastewater into surface waters. These so-called hormonally active agents can upset the normal hormone balance of aquatic organisms such as fish, and affect their development, health and reproduction. Fish take in these substances via their gills. While the hormonally active agents do degrade over time in the water, they can bind to other particles and be deposited in the sediment, where they accumulate. A new study by Anne-Katrin Müller from the Rheinisch-Westfälische Technische Hochschule Aachen in collaboration with the Ecotoxicology Centre in Dübendorf shows how turbulence can re-release the substances to circulate in the surrounding water.

The researchers investigated the Luppe river in Sachsen-Anhalt, which is a hotspot for pollution with hormonally active agents, and xenooestrogens in particular. For their tests, the researchers took sediment samples into the laboratory and, in a beaker, simulated the kind of turbulence that can occur during a flood. They then determined the concentration of freely circulating hormones in the water using a passive collector. The results show that hormones bound to sediment particles can to some extent be released again when they come into contact with the water, and can then be present in ecotoxicologically relevant concentrations. “This could potentially have negative effects on aquatic organisms”, explains Etienne Vermeirssen, Group Leader for aquatic ecotoxicology at the Ecotox Centre, and co-author of the study.

From laboratory to field

However, the researchers cannot prove that this is the case purely through their current work. So, to test their hypothesis they need to take the leap from the beaker to the real world. Follow-up tests in an artificial basin system have already been carried out and are currently being evaluated, says Vermeirssen. “It would be fascinating to then take the work into the field and measure the bioavailability of hormonally-active agents in actual surface waters – before, during and after flooding events.” This work could be carried out in Germany, as hormone pollution levels in Swiss lakes and rivers are actually very low. The reason for this is that wastewater treatment plants by and large remove the oestrogenically active substances. “This also means that river sediment pollution is less of a concern in Switzerland than it is in Germany”, says Vermeirssen, who goes on to explain that the latest laboratory tests at the Ecotoxicology Centre carried out by him and his master’s student Ali Kizgin have shown concentrations in the Luppe to be 50 times greater.

Studies worldwide have demonstrated through in vitro bioassays and chemical analysis that endocrine-disrupting chemicals (EDCs) can accumulate in river sediments. However, remobilization of sediment-bound EDCs due to bioturbation or re-suspension during flood events remains poorly understood. The aim of this study was to evaluate the bioavailability of EDCs, more specifically estrogenic compounds (EC), from sediment under turbulent conditions using a passive sampling approach. Sediment was sampled along the Luppe River, Germany, previously described as a "hotspot" for ECs. The concentration of target ECs and estrogenic activity were investigated using chemical analysis (LC MS/MS) in addition to a novel screening tool (planar Yeast Estrogen Screen; p-YES) that utilizes high performance thin-layer chromatography plates in combination with an in vitro bioassay (YES). Estrone (50%, E1) and nonylphenol (35%, NP) accounted for the majority of estrogenic activity reported of up to 20 ± 2.4 μg E2 equivalents per kg dry weight in the Luppe sediments. Two types of passive samplers (polar organic chemical integrative sampler (POCIS) and Chemcatcher) were used to investigate the bioavailability of ECs from suspended sediment under laboratory conditions. NP, E1, E2 and ethynylestradiol (EE2) were remobilized from Luppe sediment when subjected to turbulent conditions, such as in a flood event, and were readily bioavailable at ecotoxicologically relevant concentrations (NP 18 μg/L, E1 14 ng/L, E2 0.2 ng/L, EE2 0.5 ng/L).
See DOI
See Institutional Repository
Müller, A.-K.; Leser, K.; Kämpfer, D.; Riegraf, C.; Crawford, S. E.; Smith, K.; Vermeirssen, E. L. M.; Buchinger, S.; Hollert, H. (2019) Bioavailability of estrogenic compounds from sediment in the context of flood events evaluated by passive sampling, Water Research, 161, 540-548, doi:10.1016/j.watres.2019.06.020, Institutional Repository
Created by Felicitas Erzinger
Share with others: