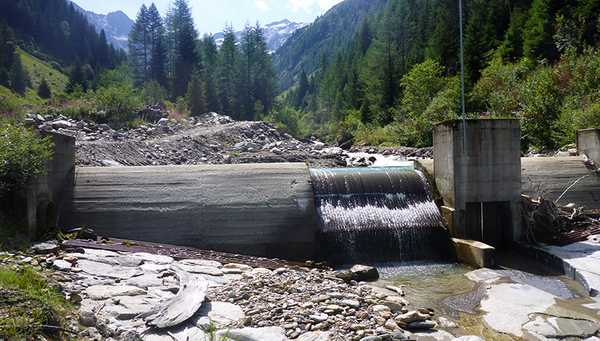 Small hydropower plants are often constructed on alpine streams, where they may have adverse impacts on sensitive ecosystems. Little is known, however, about the particular effects of individual plants, or the cumulative effects of multiple plants within the same river system. The current state of knowledge has now been reviewed in a study by Eawag researchers. They conclude that planning tools which consider basin-scale effects could be used to identify sites for plants so as to minimize ecological impacts while maximizing hydropower production.

Following the nuclear disaster at Fukushima in 2011 and the adoption of the Paris Climate Agreement in 2015 , there has been a global boom in hydropower development. Because the hydropower potential of larger rivers has already been exploited in developed countries such as Switzerland, new projects increasingly involve small plants with a capacity of less than 10 megawatts (MW). According to recent estimates, more than 80,000 small (up to 50 MW) hydropower plants are now in operation worldwide, with at least another 11,000 plants currently being planned.

Small hydropower plants have detrimental effects on aquatic ecosystems. Particularly affected are alpine streams, which are among Switzerland’s last remaining near-natural watercourses, harbouring a unique fauna and flora adapted to fast-flowing, dynamic habitats. Hydropower plants create barriers, leading to habitat fragmentation or degradation and impeding the migration and dispersal of fish and other organisms. In the reaches affected, reduced discharge and altered flow regimes result in a loss of genetic diversity, with populations consequently being less able to adapt to changing environmental conditions (e.g. due to climate change).

When small hydropower plants are planned, consideration is often only given to the ecological impacts of the individual plant on, for example, residual-flow reaches or connectivity for fish. Usually, however, a number of hydropower plants are operated within a given river system. As relatively little is known about how the various effects of multiple plants interact, a review of the literature has now been conducted by scientists at Eawag.

Keeping adverse impacts to a minimum

First author Katharina Lange explains: “The ecological footprint per megawatt of power produced may be much higher for small than for large hydropower plants. Only by considering the cumulative effects of multiple small plants can their adverse impacts be kept to a minimum.” As the authors emphasize, not just local but basin-scale impacts of small plants need to be examined during the planning process. In addition, sites should be selected on the basis of a comparative analysis so as to maximize production while minimizing impacts on biodiversity.

In many cases, plant operations could also be improved through mitigation measures such as dynamic residual flows. According to Lange, other stressors, such as fishing or climate change, should also be taken into account: “Their impacts may be exacerbated through interaction with the effects of small hydropower.” For example, low residual flows can also lead to higher water temperatures, thus intensifying the effects of climate warming.

Establishing a broad knowledge base

If small hydropower plants are to be designed and operated so as to minimize ecological impacts, there is a need for adequate planning tools. In addition to the development of such tools, further large-scale studies of river systems are required: for example, selected biodiversity indicators need to be assessed. This would include the distribution of populations particularly well adapted to local environmental conditions.

If knowledge is lacking concerning the genetic diversity of populations in rare or unique ecosystems such as alluvial habitats or high-gradient alpine streams, these should be designated as protected zones. As Lange points out, “For such protected zones, connectivity with larger rivers must be ensured.” In general, connectivity should be maintained as widely as possible throughout the river system. Only with careful planning of this kind can small hydropower contribute to sustainable energy provision.

Construction of small hydropower plants (<10 megawatts) is booming worldwide, exacerbating ongoing habitatfragmentation and degradation, and further fueling biodiversity loss. A systematic approach for selectinghydropower sites within river networks may help to minimize the detrimental effects of small hydropower onbiodiversity. In addition, a better understanding of reach-and basin-scale impacts is key for designing planning tools. We synthesize the available information about (1) reach-scale and (2) basin-scale impacts of small hydropower plants on biodiversity and ecosystem function, and (3) interactions with other anthropogenic stressors.We then discuss state-of-the-art, spatially explicit planning tools and suggest how improved knowledge of theecological and evolutionary impacts of hydropower can be incorporated into project development. Such toolscan be used to balance the benefits of hydropower production with the maintenance of ecosystem services andbiodiversity conservation. Adequate planning tools that consider basin-scale effects and interactions with other stressors, such as climate change, can maximize long-term conservation.
See DOI
See Institutional Repository
Lange, K.; Meier, P.; Trautwein, C.; Schmid, M.; Robinson, C. T.; Weber, C.; Brodersen, J. (2018) Basin-scale effects of small hydropower on biodiversity dynamics, Frontiers in Ecology and the Environment, 16(7), 397-404, doi:10.1002/fee.1823, Institutional Repository

Small vs large hydropower in Switzerland: (a) number of plants and (b) total production in terawatt hours per year. Despite their limited contribution to overall production, the number of small hydropower plants has steadily increased in recent years.