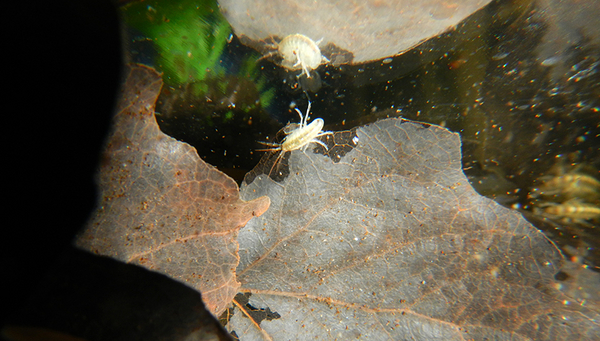 Aquatic life in freshwaters is strongly dependent on inputs of food resources from terrestrial ecosystems. Among the most important sources of energy are leaf and wood litter. This detritus is initially broken down mainly by macroinvertebrates such as snails, insects, worms and amphipods. As macroinvertebrates are a nutritional resource for a wide variety of larger consumers, they play a key role in the food web.

In the northern hemisphere, amphipod species are widely dominant, accounting for a large proportion of total macroinvertebrate biomass in many freshwater ecosystems. As they consume leaf litter and other organic material, changes in the composition of amphipod species may have significant effects on ecosystem processes.

Assessing the effects of invasive species

The spread of new, non-native amphipod species in Swiss freshwaters has been reported since the 1990s. It can be attributed to various factors – for example, accidental introduction by humans or shipping and the connection of different river catchments by canals. Florian Altermatt, head of the Spatial Dynamics research group at Eawag, says: “We’ve good reason to take a closer look at this. It’s important to understand how these invasions occur, and how freshwater systems are affected over the long term.”

Over the past three years, new findings have been made in this area by biologist Chelsea Little, a doctoral researcher at Eawag. In a meta‑analysis of existing studies and in laboratory experiments, she found that leaf litter consumption rates are lower for non-native than for native amphipod species.

While this result may initially appear to be alarming, Little also demonstrated in the laboratory that fairly high levels of nutrient decomposition can be maintained where native species continue to co-exist with non-native amphipods. As Little explains, “Our fieldwork revealed that native species are not necessarily completely replaced by the new species.”

New experimental approach in the laboratory

In her laboratory experiments, Little sought to recreate natural conditions as realistically as possible. Rather than studying just one amphipod species, she used three central European amphipod species with different evolutionary and colonization histories – Gammarus fossarum (a native species), Gammarus roeselii (found in Central Europe since around 1850) and Dikerogammarus villosus (an invasive species which arrived in the 1990s). In addition, to ensure a diverse leaf mixture, leaves from six common riparian tree species [1] were collected around Zurich, including the common alder, goat willow and European beech.

Altermatt says: “This approach yielded new insights. Based on earlier studies conducted with leaves from single tree species, we expected that a more diverse leaf litter mixture would be consumed more quickly, on average, by the most common native amphipod species, Gammarus fossarum.” In fact, this hypothesis was not confirmed by the results of the experiments: “In some cases, litter consumption rates were lower.”

But how are species replaced under natural conditions, and when and how do species co-occur? To gain a better understanding of these processes, Little conducted surveys of amphipods in ten streams flowing into Lake Constance.

Altermatt explains: “We know that, in Switzerland, non-native species already make up about half of the amphipods found in surface waters.” However, this is mainly true of larger rivers and lakes; native species are still dominant in small streams, and these form the majority of the river network. “In addition,” says Altermatt, “that’s where most of the energy inputs occur – in the fine network of headwater streams. Rivers and lakes receive proportionately less detritus.”

Field sampling showed that the coexistence of different species was much rarer than expected, even though local environmental conditions at many of the roughly 120 sampling points appeared to be suitable for more than one species. Often one species remained dominant, sometimes a native, sometimes a non-native species. According to Little, “One possible explanation is the order of arrival of the species.” So‑called priority effects have been more extensively studied in plant communities, but Little’s study suggests that they could also play a role in the case of amphipods.

But how exactly could invasive species also benefit from priority effects? Little explains: “Stream reaches sometimes dry up, or a population may be eliminated by water pollution. Subsequently, the first species to become established at the site will then become dominant at this locality.”

Although Chelsea Little is due to complete her doctoral thesis in a few months’ time, she will continue to investigate this topic together with Florian Altermatt. “The questions of how species coexistence arises, or how individual species are replaced by others, will occupy us for some time to come,” says Altermatt.

The laboratory study discussed in the text was published in Ecological Monographs (online):
https://doi.org/10.1002/ecm.1299

The field survey report appeared in Proceedings of the Royal Society B: Biological Sciences:
https://doi.org/10.1098/rspb.2018.0205

Both studies were funded by the Swiss National Science Foundation.