Thousands of chemical substances end up in the aquatic environment, either by direct or indirect means. Some of these chemicals – hormones for example – have an effect on aquatic organisms, with far-reaching consequences. The water treatment plants cannot remove all of the pollutants from the wastewater. Eawag researches amongst other issues how supplementary measures in water treatment plants  affect biodiversity. 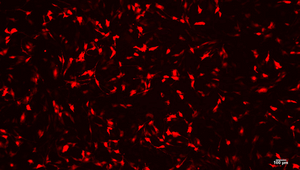 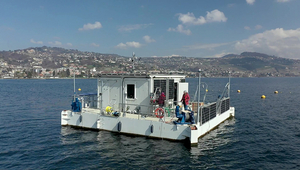 Temperature, phytoplankton density and bacteria diversity drive the biotransformation of micropollutants in a lake ecosystem

For most micropollutants (MPs) present in surface waters, such as pesticides and pharmaceuticals, the contribution of biotransformation to their overall removal from lake ecosystems is largely unknown. This study aims at empirically determining the biotransformation rate constants for 35 MPs at different periods of the year and depths of a meso-eutrophic lake. We then tested statistically the association of environmental parameters and microbial community composition with the biotransformation rate constants obtained. Biotransformation was observed for 14 out of 35 studied MPs for at least one sampling time. Large variations in biotransformation rate constants were observed over the seasons and between compounds. Overall, the transformation of MPs was mostly influenced by the lake's temperature, phytoplankton density and bacterial diversity. However, some individual MPs were not following the general trend or association with microorganism biomass. The antidepressant mianserin, for instance, was transformed in all experiments and depths, but did not show any relationship with measured environmental parameters, suggesting the importance of specific microorganisms in its transformation. The results presented here contribute to our understanding of the fate of MPs in surface waters and thus support improved risk assessment of contaminants in the environment.
See DOI
See Institutional Repository
Chalifour, A.; Walser, J. C.; Pomati, F.; Fenner, K. (2021) Temperature, phytoplankton density and bacteria diversity drive the biotransformation of micropollutants in a lake ecosystem, Water Research, 202, 117412 (10 pp.), doi:10.1016/j.watres.2021.117412, Institutional Repository

Potential of preventive bioremediation to reduce environmental contamination by pesticides in an agricultural context: a case study with the herbicide 2,4-D

One of the major problems with pesticides is linked to the non-negligible proportion of the sprayed active ingredient that does not reach its intended target and contaminates environmental compartments. Here, we have implemented and provided new insights to the preventive bioremediation process based on the simultaneous application of the pesticide with pesticide-degrading microorganisms to reduce the risk of leaching into the environment. This study pioneers such a practice, in an actual farming context. The 2,4-dichlorophenoxyacetic acid herbicide (2,4-D) and one of its bacterial mineralizing-strains (Cupriavidus necator JMP134) were used as models. The 2,4-D biodegradation was studied in soil microcosms planted with sensitive (mustard) and insensitive (wheat) plants. Simultaneous application of a 2,4-D commercial formulation (DAM®) at agricultural recommended doses with 105 cells.g−1 dw of soil of the JMP134 strain considerably accelerated mineralization of the herbicide since its persistence was reduced threefold for soil supplemented with the mineralizing bacterium without reducing the herbicide efficiency. Furthermore, the inoculation of the Cupriavidus necator strain did not significantly affect the α- and β-diversity of the bacterial community. By tackling the contamination immediately at source, the preventive bioremediation process proves to be an effective and promising way to reduce environmental contamination by agricultural pesticides.
See DOI
See Institutional Repository
Carles, L.; Martin-Laurent, F.; Devers, M.; Spor, A.; Rouard, N.; Beguet, J.; Besse-Hoggan, P.; Batisson, I. (2021) Potential of preventive bioremediation to reduce environmental contamination by pesticides in an agricultural context: a case study with the herbicide 2,4-D, Journal of Hazardous Materials, 416, 125740 (10 pp.), doi:10.1016/j.jhazmat.2021.125740, Institutional Repository

Formation of fiber fragments during abrasion of polyester textiles

Comments on the amendment of the Water Protection Ordinance, 11-2017 [German]

Micro plastics in the environment
[available German and French] 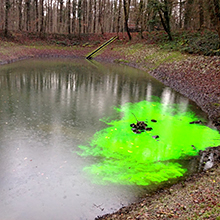 In the canton of Basel-Landschaft, existing pollution situation and hazards to groundwater were determined. The model area Hardwald is characterized by strongly urban and industrially areas. 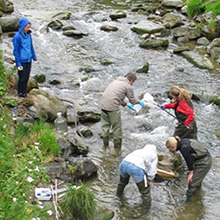 EcoImpact is an Eawag-wide interdisciplinary research effort, strongly motivated by the planned modifications of the Swiss wastewater treatment plants. 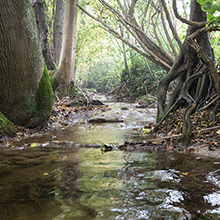 Comprehensive monitoring of organic trace substances in surface waters is time-consuming and costly. The NAWA SPEZ project delivers data and analyses on the status of water pollution.

Wastewater is a source of antibiotic resistant bacteria. We study their dissemination in the aquatic environment, and strategies to remove them. 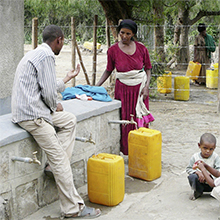 Water Resource Quality (WRQ) was an integrated project running from 2006-2012 at Eawag that aimed to develop a generally applicable framework for the mitigation of geogenic contamination in groundwater used for drinking.