What are blue-green algae?

From a scientific point of view, blue-green algae are not algae, but bacteria, as they do not have a real cell nucleus. Cyanobacteria, as they are correctly named, are among the oldest life forms on earth and are thought to be the first organisms that were able to obtain their energy through photosynthesis, releasing oxygen in the atmosphere. There are several thousands of different species of cyanobacteria on our planet, and they are the most abundant photosynthetic microorganisms in the oceans. So far, about 40 species are known to produce metabolites that are toxic to animals. In lakes, cyanobacteria are mostly common in summer and autumn.

Who can I contact if I have specific questions about the situation in my region or about a possible case of poisoning?

Contact the cantonal laboratory or the office for water protection in your canton of residence. Water in contact with human body see also website of Federal Food Safety and Veterinary Office (in German, French and Italian).

What favours a mass reproduction (bloom) of cyanobacteria?

For a mass reproduction ("bloom") of cyanobacteria, calm, warm water, strong sunlight and sufficient nutrients (nitrogen and phosphorus) are required. If the conditions are right, blooms can form within days or weeks. Some cyanobacteria have gas bubbles in their cells that allow them to regulate buoyancy (like a submarine). In summer, characterized by warm and calm waters, they can thus access nutrients by sinking low in the stable water column, and rise to the uppermost layer of water (top layer) to access light. Their tolerance to high temperature and high light, combined with a unique ability of some species to use atmospheric nitrogen to grow, makes them almost unrivalled there, and they can reproduce undisturbed. Forming large colonies and producing toxic metabolites can favour such mass reproduction by allowing cyanobacteria to escape predation by herbivore zooplankton. Important to know: Other species (e.g. the non-toxic diatom Fragilaria) can also reproduce en masse under certain conditions and form scum and mats on the surface of the lake.

Although bloom conditions are more favorable during the late summer, the interactions between changing environmental conditions cause large seasonal and year-to-year fluctuations in cyanobacterial abundances and the probability of blooms. Some toxin-producing strains can occur early in the summer season while others are only found during late summer and early autumn.

Is there also a risk in streams and rivers?

Except in river barrages no. In turbulent water the cyanobacteria are not as competitive as other species, and don’t multiply on a massive scale. While cyanobacteria are part of the natural community in most surface waters and on land, they typically do not dominate and are of no risk. However, other hygiene problems can occur in streams and rivers, e.g. because untreated wastewater overflows into the watercourse during heavy rainfall or because dilution below sewage treatment plants is insufficient in dry periods.

Should more cyanobacterial blooms be expected in the future?

Numerous studies have indicated that global warming, eutrophication and rising CO2 levels are likely to increase the frequency, intensity and duration of cyanobacterial blooms in many aquatic ecosystems across the globe. But the mechanisms driving a cyanobacterial bloom is still a hot research question with no definitive answer. For example there are three hypotheses why sporadic blooms occur in lakes that are not nutrient rich: 1) a spike of nutrient due to a stochastic event (run-off from land, turbulent mixing); 2) selective zooplankton grazing for edible species, with accumulation of non-edible cyanobacteria; 3) wind concentrating buoyant cells to the shore. The most important factors are likely to vary among lakes, and many blooms may involve an interaction between all three factors.

Increasing temperatures can promote cyanobacteria through both direct and indirect mechanisms. Warmer water can directly increase cyanobacteria growth rates (and therefore total biomass). Increasing surface water temperature can also affect cyanobacteria blooms by changing the density and physical structure of lake water. For example, lakes are becoming increasingly poorly mixed because warmer, lighter surface water in mild winters does not sink into the depths. Thus, cyanobacteria take advantage of extended summer-like conditions that favor their growth, and of the lack a deep water mixing that prevents them from sinking where they otherwise would decompose at the bottom of the lake.

An Eawag study in Switzerland revealed that cyanobacteria have become increasingly prevalent in lakes around the Alps over the last 100 years. The study also showed that cyanobacterial community compositions have become more and more similar across lakes, regardless of geographic location. The main beneficiaries of ongoing global warming and the temporary nutrient surplus of the late 20th century are the species that are more adapted to calm waters and some of them are potentially toxic. As a result, the risk of sporadic blooms now exists in almost all lakes and not just in a few. A study from 2017 predicts that, in the USA, the mean number of days with harmful cyanobacterial blooms will increase from about 7 days per year per waterbody under current conditions to 18-39 days in 2090.

What are the risks for bathers?

Not all cyanobacterial blooms are toxic, and different metabolites can vary hugely in their toxicity levels. Under high cyanobacterial abundances (see below), bloom material can be harmful to human health, especially for toddlers. Recreational activities in the water are the most likely route of exposure. Guidelines by the World Health Organization report that mild symptoms such as non-toxic but allergic effects can occur at 20’000 cyanobacterial cells per mL. Such symptoms include skin rashes, reddened eyes. When the cyanobacterial count is higher, 100’000 cells per mL, toxin concentration can reach critical levels resulting in breathing difficulties and flu like symptoms. However it becomes dangerous when the local concentrations increase because water is swallowed and wind blows the bloom into one section of the lake with more than 10-100 million cells per mL. Exposed bathers that swallow water can experience symptoms of poisoning such as nausea and diarrhea.

What are the risks for animals?

Animals such as dogs are much more likely to be poisoned than humans because they will readily drink larger amounts of water along the shores (where concentrations of cyanobacteria are generally higher) and they will lick their fur after swimming. The combination of the higher intake of water and their relatively low body weight puts animals at particular risk. Often, the first sign that a bloom of cyanobacteria exists is a sick dog that has been swimming in stagnant water or a cow that drunk water from a pond with a bloom.

What are the effects on the ecosystem?

Cyanobacterial blooms normally are not edible to herbivore plankton. They do not contribute to the productivity of the overall food-chain (i.e. fish stocks). After the death of a cyanobacterial bloom, large amounts of organic matter sink to the bottom of the lake, where it is decomposed by bacteria. This leads to oxygen deficit in deeper water layers, which has two negative consequences: it triggers more release of nutrients from the sediments (which feeds the next cyanobacterial blooms), and prevents fishes from living or spawning in the deep waters. Large cyanobacterial blooms thus exacerbate over-fertilization or slow down the recovery of the lakes.

How can risks be avoided?

Which toxins come from cyanobacteria?

The toxins and other bioactive compounds produced by cyanobacteria are a diverse group of chemical substances that are categorized by their specific toxic effects:

At what levels do cyanobacteria and their toxins become dangerous?

Several countries established regulations and guidelines for cyanobacteria in water. It is important to note that different thresholds are set drinking water and recreational waters. Most countries use the guidelines by the World Health Organization, like Switzerland. In these guidelines, the focus lies on cyanobacterial cell counts and cyanobacterial toxin concentrations. In freshwaters, the toxin that is being properly assessed, is from the groups of microcystins (i.e., microcystin-LR produced e.g. by Microcystis aeruginosa and the Burgundy blood bacteria Planktothrix rubescens), since they are the most common and studied. The concentration of microcystins is therefore used in many countries to assess bathing water quality. Microcystins belong to the hepatotoxins. It is also suspected that they are neurotoxic.

The WHO classifies in their (Toxic cyanobacteria in water - A guide to their public health consequences, monitoring and management) three categories of risk with increasing levels of cyanobacterial cell concentrations (cells per mL water) and health risks.

Some countries also suggest limits of the toxin microcystin-LR in addition to cell counts, for example Germany and France sets limits of >10 µg/L and 25µg/L, respectively, for a moderate to high risk (equivalent to >100 000 cyanobacterial cells/mL).

However, cyanobacteria produce many other bioactive substances, currently 2000 have been identified including about 300 that belong to the class of microcystins. Research on most of these compounds is only just beginning, no guidelines exist yet, but there is evidence that some substances could also pose risks. Three additional substances that have been sufficiently studied and will be included in the 2020 update of the WHO guidelines: the neurotoxic saxitoxin and anatoxin, and the cytotoxic cylindrospermopsin.

Who controls the bathing water quality?

The cantons are responsible for monitoring water quality in the lakes and informing the public, including issuing bathing bans if toxins are found. For bathing waters these are mostly the cantonal laboratories of the Food Inspection and Consumer Protection Services or, in some cantons, the laboratories of the water protection agencies. The Federal Office for the Environment (FOEN) collates the cantonal data and makes it available for national reports. According to the Federal Water Protection Ordinance, the water quality in surface waters must be such that “the hygienic conditions for bathing are guaranteed where this is expressly permitted by the authorities or where a large number of people usually bathe and the authorities do not advise against it.” (GSchV, Anhang 2, Art. 11, 1e).

Can cyanobacteria also get into drinking water?

The location of the tapping points in deeper water layers prevents the summer algae mats from the surface from entering the system when lakewater is used as drinking water. However, when the lake is mixed (usually in winter), cyanobacteria can also be sucked in. The water supply companies therefore monitor the raw water closely and efficiently prevent cyano-toxins from entering the drinking water supplied by treating the water. 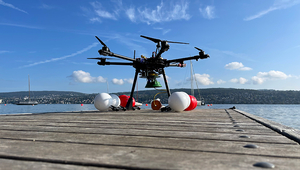 June 14, 2022In the future, drones could open up new possibilities for taking water samples fully automatically in remote areas. To this end, Eawag researchers tested a drone model developed at Empa and Imperial College. 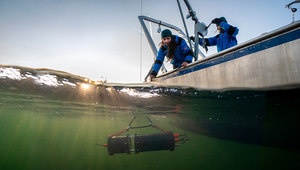 November 2, 2021Our lakes, rivers and streams are teeming with the smallest creatures, plants and bacteria that are barely visible to the naked eye, if at all. An underwater camera makes it possible to observe and identify the species of these creatures in real time. 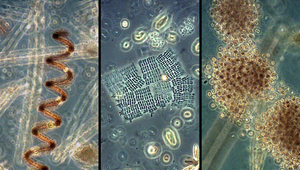 August 5, 2021Blue-green algae and other phytoplankton are very important for the proper functioning of aquatic ecosystems. When they accumulate in high quantities, however, they can be harmful to people and animals because some blue-green algae species produce toxic chemicals. For this reason, the aquatic research institute Eawag is currently working on methods to improve the prediction of bloom events.