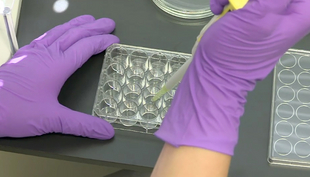 The zebrafish embryo toxicity test has been proposed as an alternative for the acute fish toxicity test, which is required by various regulations for environmental risk assessment of chemicals. We investigated the reliability of the embryo test by probing organic industrial chemicals with a wide range of physicochemical properties, toxicities, and modes of toxic action. Moreover, the relevance of using measured versus nominal (intended) exposure concentrations, inclusion of sublethal endpoints, and different exposure durations for the comparability with reported fish acute toxicity was explored. Our results confirm a very strong correlation of zebrafish embryo to fish acute toxicity. When toxicity values were calculated based on measured exposure concentrations, the slope of the type II regression line was 1 and nearly passed through the origin (1 to 1 correlation). Measured concentrations also explained several apparent outliers. Neither prolonged exposure (up to 120 h) nor consideration of sublethal effects led to a reduced number of outliers. Yet, two types of compounds were less lethal to embryos than to adult fish: a neurotoxic compound acting via sodium channels (permethrin) and a compound requiring metabolic activation (allyl alcohol).
See DOI
See Institutional Repository
Knöbel, M.; Busser, F. J. M.; Rico-Rico, Á.; Kramer, N. I.; Hermens, J. L. M.; Hafner, C.; Tanneberger, K.; Schirmer, K.; Scholz, S. (2012) Predicting adult fish acute lethality with the zebrafish embryo: relevance of test duration, endpoints, compound properties, and exposure concentration analysis, Environmental Science and Technology, 46(17), 9690-9700, doi:10.1021/es301729q, Institutional Repository

Due to the implementation of new legislation, such as REACh, a dramatic increase of animal use for toxicity testing is expected and the search for alternatives is timely. Cell-based in vitro assays are promising alternatives. However, the behavior of chemicals in these assays is still poorly understood. We set out to quantify the exposure and associated toxicity of chemicals with different physicochemical properties toward a fish gill cell line when different solvents and procedural steps are used to introduce test chemicals to cells. Three chemicals with a range of hydrophobicity and volatility were selected and delivered in three different solvents using two common dosing procedures. Toxicity tests were coupled with chemical analysis to quantify the chemical concentrations within culture wells. The impact of solvents and dosing procedure was greatest for the most volatile and hydrophobic test chemical. We show that certain combinations of the test chemical, solvent, and procedural steps can lead to inhomogeneous distribution of the test chemical and thus differing degrees of bioavailability, resulting in quantitative differences in apparent toxicity.
See DOI
See Institutional Repository
Tanneberger, K.; Rico-Rico, A.; Kramer, N. I.; Busser, F. J. M.; Hermens, J. L. M.; Schirmer, K. (2010) Effects of solvents and dosing procedure on chemical toxicity in cell-based in vitro assays, Environmental Science and Technology, 44(12), 4775-4781, doi:10.1021/es100045y, Institutional Repository

New EU legislation is providing an impetus for research aimed at replacing acute fish toxicity testing with in vitro alternatives. In line with such research, the objective of this study was to determine what factors influence the correlation between in vitro and fish toxicity data. Basal cytotoxicity (IC50) and acute toxicity data from fathead minnow (LC50) of 82 industrial organic chemicals were obtained from the Halle Registry of Cytotoxicity and the US EPA Fathead Minnow Database. A good correlation between IC50 with LC50 data was found (r 0.84). Yet, IC50 data were less sensitive than LC50 data by an order of magnitude. Using multiple regression analysis, the octanol–water partition coefficient (KOW) and the Henry’s Law Constant (H) were found to significantly explain the low absolute sensitivity. The mode of action (MOA) of the chemical was found to significantly explain the general variation in the log IC50/log LC50 regression line. These results support the notion that (a) the bioavailability of hydrophobic (high KOW) and volatile (high H) chemicals is significantly lower in in vitro assays than in the fish bioassay and (b) multiple cell types and endpoints should be included to mimic the modes of action possible in the whole organism.
See DOI
See Institutional Repository
Kramer, N. I.; Hermens, J. L. M.; Schirmer, K. (2009) The influence of modes of action and physicochemical properties of chemicals on the correlation between in vitro and acute fish toxicity data, Toxicology in Vitro, 23(7), 1372-1379, doi:10.1016/j.tiv.2009.07.029, Institutional Repository

This paper details the derivation of a list of 60 reference chemicals for the development of alternatives to animal testing in ecotoxicology with a particular focus on fish. The chemicals were selected as a prerequisite to gather mechanistic information on the performance of alternative testing systems, namely vertebrate cell lines and fish embryos, in comparison to the fish acute lethality test. To avoid the need for additional experiments with fish, the U.S. EPA fathead minnow database was consulted as reference for whole organism responses. This database was compared to the Halle Registry of Cytotoxicity and a collation of data by the German EPA (UBA) on acute toxicity data derived from zebrafish embryos. Chemicals that were present in the fathead minnow database and in at least one of the other two databases were subject to selection. Criteria included the coverage of a wide range of toxicity and physico-chemical parameters as well as the determination of outliers of the in vivo/in vitro correlations. While the reference list of chemicals now guides our research for improving cell line and fish embryo assays to make them widely applicable, the list could be of benefit to search for alternatives in ecotoxicology in general. One example would be the use of this list to validate structure–activity prediction models, which in turn would benefit from a continuous extension of this list with regard to physico-chemical and toxicological data.
See DOI
See Institutional Repository
Schirmer, K.; Tanneberger, K.; Kramer, N. I.; Völker, D.; Scholz, S.; Hafner, C.; Lee, L. E. J.; Bols, N. C.; Hermens, J. L. M. (2008) Developing a list of reference chemicals for testing alternatives to whole fish toxicity tests, Aquatic Toxicology, 90(2), 128-137, doi:10.1016/j.aquatox.2008.08.005, Institutional Repository