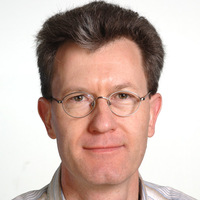 Composition and structure of Fe(III)-precipitates formed by Fe(II) oxidation in water at near-neutral pH: interdependent effects of phosphate, silicate and Ca

The oxidation and removal of As(III) by commercially available micro-scale zero-valent iron (mZVI) was studied in aerated synthetic groundwater with initially 6.7 μM As(III) at neutral pH values. Batch experiments were performed to investigate the influence of ZVI and H2O2 concentrations on As(III) oxidation and removal. Oxidation and removal kinetics was significantly increased by increasing ZVI concentration or by adding H2O2 in micromolar concentrations slightly higher than that of initial As(III). Observed half-lifes for arsenic removal without added H2O2 were 81–17 min at ZVI concentrations of 0.15–2.5 g/L, respectively. X-ray absorption spectroscopy (XAS) confirmed that almost all As(III) was converted to As(V) after 2 h of reaction in the pH range 5–9. Addition of 9.6 μM H2O2 to 0.15 g/L ZVI suspensions diminished half-lifes for arsenic removal from 81 to 32 min and for As(III) oxidation from 77 to 8 min, i.e., by approximately a factor of 10. The increased rate of As(III) oxidation is attributable to enhanced formation of oxidants by the Fenton reaction with higher initial concentrations of H2O2. In practice, results of this study suggest that addition of small amounts (<1 mg/L) of H2O2 in various forms (e.g. stable and widely available Na-percarbonate) to water prior to treatment could significantly enhance As(III) oxidation and removal with ZVI.
See DOI
See Institutional Repository
Katsoyiannis, I. A.; Voegelin, A.; Zouboulis, A. I.; Hug, S. J. (2015) Enhanced As(III) oxidation and removal by combined use of zero valent iron and hydrogen peroxide in aerated waters at neutral pH values, Journal of Hazardous Materials, 297, 1-7, doi:10.1016/j.jhazmat.2015.04.038, Institutional Repository

The main arsenic mitigation measures in Bangladesh, well-switching and deep tube wells, have reduced As exposure, but water treatment is important where As-free water is not available. Zero-valent iron (ZVI) based SONO household filters, developed in Bangladesh, remove As by corrosion of locally available inexpensive surplus iron and sand filtration in two buckets. We investigated As removal in SONO filters in the field and laboratory, covering a range of typical groundwater concentrations (in mg/L) of As (0.14–0.96), Fe (0–17), P (0–4.4), Ca (45–162), and Mn (0–2.8). Depending on influent Fe(II) concentrations, 20–80% As was removed in the top sand layer, but As removal to safe levels occurred in the ZVI-layer of the first bucket. Residual As, Fe, and Mn were removed after re-aeration in the sand of the second bucket. New and over 8-year-old filters removed As to <50 μg/L and mostly to <10 μg/L and Mn to <0.2 mg/L. Vertical concentration profiles revealed formation of Fe(II) by corrosion of Fe(0) with O2 and incorporation of As into forming amorphous Fe phases in the composite iron matrix (CIM) of newer filters and predominantly magnetite in older filters. As mass balances indicated that users filtered less than reported volumes of water, pointing to the need for more educational efforts. All tested SONO filters provided safe drinking water without replacement for up to over 8 years of use.
See DOI
See Institutional Repository
Neumann, A.; Kaegi, R.; Voegelin, A.; Hussam, A.; Munir, A. K. M.; Hug, S. J. (2013) Arsenic removal with composite iron matrix filters in Bangladesh: a field and laboratory study, Environmental Science and Technology, 47(9), 4544-4554, doi:10.1021/es305176x, Institutional Repository

Bangladesh relies heavily on groundwater for the irrigation of dry-season rice. However, the groundwater used for irrigation often contains high concentrations of arsenic, potentially jeopardizing the future of rice production in the country. In seasonally flooded fields, topsoil arsenic concentrations decrease during the monsoon season, suggesting that flooding attenuates arsenic accumulation in the soils. Here we examine the chemistry of soil porewater and floodwater during the monsoon season in rice paddies in Munshiganj, Bangladesh, to assess whether flooding releases significant quantities of arsenic from the soils. We estimate that between 51 and 250 mg m−2 of soil arsenic is released into floodwater during the monsoon season. This corresponds to a loss of 13–62% of the arsenic added to soils through irrigation each year. The arsenic was distributed throughout the entire floodwater column by vertical mixing and was laterally removed when the floodwater receded. We conclude that monsoon floodwater removes a large amount of the arsenic added to paddy soils through irrigation, and suggest that non-flooded soils are particularly at risk of arsenic accumulation.
See DOI
See Institutional Repository
Roberts, L. C.; Hug, S. J.; Dittmar, J.; Voegelin, A.; Kretzschmar, R.; Wehrli, B.; Cirpka, O. A.; Saha, G. C.; Ali, M. A.; Badruzzaman, A. B. M. (2010) Arsenic release from paddy soils during monsoon flooding, Nature Geoscience, 3(1), 53-59, doi:10.1038/ngeo723, Institutional Repository

Corrosion of zerovalent iron (ZVI) in oxygen-containing water produces reactive intermediates that can oxidize various organic and inorganic compounds. We investigated the kinetics and mechanism of Fenton reagent generation and As(III) oxidation and removal by ZVI (0.1m2/g) from pH 3-11 in aerated water. Observed half-lives for the oxidation of initially 500 μg/L As(III) by 150 mg Fe(0)/L were 26-80 min at pH 3-9. At pH 11, no As(III) oxidation was observed during the first two hours. Dissolved Fe(II) reached 325, 140, and 6 μM at pH 3, 5, and 7. H2O2 concentrations peaked within 10 min at 1.2, 0.4, and <0.1 μM at pH 3, 5, and 7, and then decreased to undetectable levels. Addition of 2,2′-bipyridine (1-3 mM), prevented Fe(II) oxidation by O2 and H2O2 and inhibited As(III) oxidation. 2-propanol (14 mM), scavenging OH-radicals, quenched the As(III) oxidation at pH 3, but had almost no effect at pH 5 and 7. Experimental data and kinetic modeling suggest that As(III) was oxidized mainly in solution by the Fenton reaction and removed by sorption on newly formed hydrous ferric oxides. OH-radials are the main oxidant for As(III) at low pH, whereas a more selective oxidant oxidizes As(III) at circumneutral pH.
See DOI
See Institutional Repository
Katsoyiannis, I. A.; Ruettimann, T.; Hug, S. J. (2008) pH dependence of fenton reagent generation and As(III) oxidation and removal by corrosion of zero valent iron in aerated water, Environmental Science and Technology, 42(19), 7424-7430, doi:10.1021/es800649p, Institutional Repository