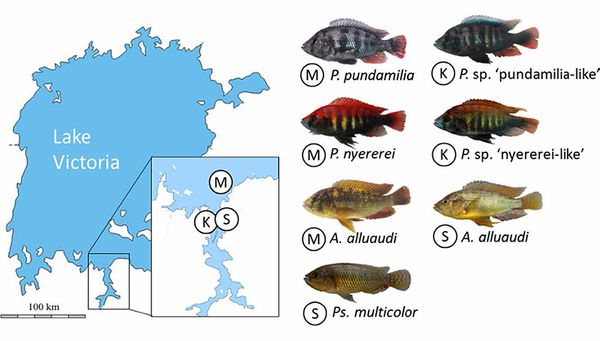 Parasites may have strong eco-evolutionary interactions with their hosts. Consequently, they may contribute to host diversification. The radiation of cichlid fish in Lake Victoria provides a good model to study the role of parasites in the early stages of speciation. We investigated patterns of macroparasite infection in a community of 17 sympatric cichlids from a recent radiation and 2 older species from 2 nonradiating lineages, to explore the opportunity for parasite-mediated speciation.

Host species had different parasite infection profiles, which were only partially explained by ecological factors (diet, water depth). This may indicate that differences in infection are not simply the result of differences in exposure, but that hosts evolved species-specific resistance, consistent with parasite-mediated divergent selection. Infection was similar between sampling years, indicating that the direction of parasite-mediated selection is stable through time. We morphologically identified 6 Cichlidogyrus species, a gill parasite that is considered a good candidate for driving parasite-mediated speciation, because it is host species-specific and has radiated elsewhere in Africa. Species composition of Cichlidogyrus infection was similar among the most closely related host species (members of the Lake Victoria radiation), but two more distantly related species (belonging to nonradiating sister lineages) showed distinct infection profiles. This is inconsistent with a role for Cichlidogyrus in the early stages of divergence. To conclude, we find significant interspecific variation in parasite infection profiles, which is temporally consistent. We found no evidence that Cichlidogyrus-mediated selection contributes to the early stages of speciation. Instead, our findings indicate that species differences in infection accumulate after speciation.