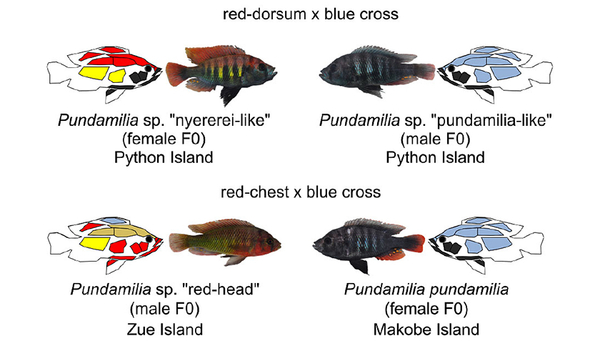 One hallmark of the East African cichlid radiations is the rapid evolution of reproductive isolation that is robust to full sympatry of many closely related species. Theory predicts that species persistence and speciation in sympatry with gene flow are facilitated if loci of large effect or physical linkage (or pleiotropy) underlie traits involved in reproductive isolation.

Here, we investigate the genetic architecture of a key trait involved in behavioural isolation, male nuptial coloration, by crossing two sister species pairs of Lake Victoria cichlids of the genus Pundamilia and mapping nuptial coloration in the F2 hybrids. One is a young sympatric species pair, representative of an axis of colour motif differentiation, red-dorsum versus blue, that is highly recurrent in closely related sympatric species. The other is a species pair representative of colour motifs, red-chest versus blue, that are common in allopatric but uncommon in sympatric closely related species. We find significant quantitative trait loci (QTLs) with moderate to large effects (some overlapping) for red and yellow in the sympatric red-dorsum × blue cross, whereas we find no significant QTLs in the non-sympatric red-chest × blue cross. These findings are consistent with theory predicting that large effect loci or linkage/pleiotropy underlying mating trait differentiation could facilitate speciation and species persistence with gene flow in sympatry.