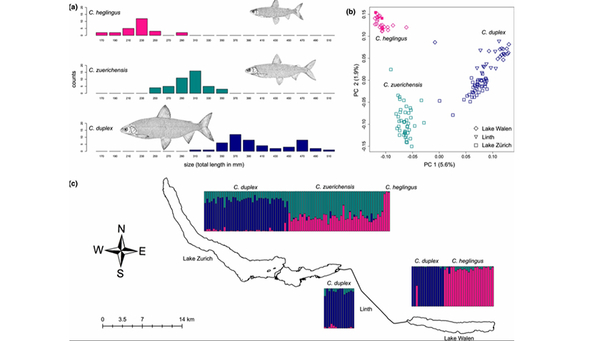 This study provides a genomic analysis (based on 16,173 RAD loci) of alpine whitefish from Lake Walensee and Lake Zurich. Philine and Ole show that with so many markers it is possible to clearly distinguish sympatric whitefish species. This then enabled them to show that in both lakes, populations of different, but ecologically similar, whitefish species declined after a period of eutrophication.

They have also found genomic signatures indicating hybridisation that is stronger in the more polluted Lake Zurich. They also found four genomic loci that show that there are parallel divergent adaptations between the shallow-water benthic species and the two deeper-water species. The genomic analysis gives a clear indication that divergent natural selection between the sympatric whitefish species in pre-alpine lakes is important for the evolution and conservation of the species and that they respond strongly to anthropogenic environmental change.