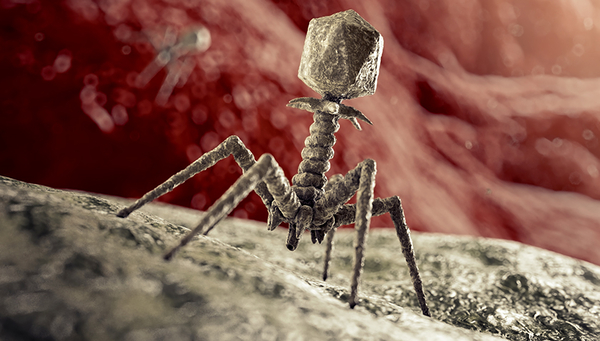 Those who have just undergone surgery in the hospital, with their weakened immune systems, are easy prey for pathogens that lurk on a wide variety of surfaces. Even careful disinfection can only partially prevent these hospital-acquired infections. One hope in the fight against the pathogenic bacteria are bacteriophages. Eawag researchers were able to show that they improve the removal of pathogens from surfaces, especially in combination with chemical disinfection.

Bacteriophages are viruses that look like lunar modules. But instead of landing peacefully on celestial bodies, they dock onto bacteria to destroy them a short time later. They need the bacteria as hosts in order to reproduce: By injecting their DNA, they make the bacteria produce new phages until they finally burst. The phages released in the process can in turn attack and destroy new bacteria. Due to their high specialisation - phages can only use one or a few species of bacteria as hosts - they are predestined for use against pathogenic bacteria.

Particularly in the fight against antibiotic-resistant bacteria, they are treated as a promising candidate and are being intensively researched. In Eastern Europe, they are already being used in medical treatment. So far, less attention has been paid to another possible area of application, namely combating pathogens on surfaces. Phages could be interesting, for example, for the removal of opportunistic pathogens in hospitals and nursing homes. Such pathogens are harmless for healthy people, but can become hazardous for patients with weakened immune systems.

Infections with opportunistic pathogens have increased more and more in recent years and cause enormous health care costs. In Switzerland, 7 to 8 percent of hospitalised patients contract a hospital-acquired infection every year, which is often caused by opportunistic pathogens. To make matters worse, many of these pathogens are also becoming increasingly resistant to antibiotics. They are often transmitted via contaminated surfaces, as it is sometimes not even possible to remove them by disinfection, or else they quickly recontaminate cleaned surfaces.

A frequent cause of these dreaded hospital-acquired infections is the opportunistic bacteria Pseudomonas aeruginosa. An infection with this pathogen can lead to pneumonia as well as wound and urinary tract infections. A study by Eawag researchers Elyse Stachler, Anina Kull and Tim Julian, published in the journal “Applied and Environmental Microbiology”, therefore investigated whether phages can improve the removal of Pseudomonas aeruginosa from surfaces.

Biofilm as a protective shield for bacteria

They investigated treatment with phages alone as well as in combination with disinfectants. For this, the researchers worked with two different phages (P1 and JG004) and two different disinfectants (sodium hypochlorite and benzalkonium chloride). In addition, the bacterium was studied in the laboratory in three different forms to replicate as closely as possible the real conditions on a wide variety of surfaces in a hospital: as free-living bacteria on the surface, in wet or in dry biofilms. With the help of such biofilms, which are a self-produced layer of mucus, the bacteria can shield themselves against antibiotics or disinfectants, for example, and are therefore particularly resistant.

The treatment of contaminated surfaces with phages therefore also had varying degrees of success depending on the growth form of the bacteria: free-living bacteria and wet biofilms could be removed by more than 99 percent. The phages were thus more effective than disinfectants. However, the phages could not eliminate dry biofilms. The researchers explain that the phages need actively growing hosts to be able to use them for their reproduction. In dry biofilms, however, the bacteria are in a kind of dormant state and therefore cannot be manipulated by the phages for their own purposes. But at least the application of phages prevented the dry biofilms from growing further.

A combination of phages and disinfectants is the most effective

The researchers also tested the combined treatment with phages and disinfectants. If phages were first applied to wet biofilms, followed by disinfectants, the bacteria could be removed significantly more effectively than by phages or disinfecting alone. In addition, the combination of both methods means that fewer phages were needed than when phages were used alone. According to the researchers, this also reduces the probability that the bacteria will become resistant to one or the other of the two treatments.

If the order of the treatment is reversed - i.e. the phages are applied after chemical disinfection - the combination hardly offers any advantages over disinfection alone. The researchers suspect that the disinfectants inactivate the outer bacterial layer of the biofilm and thus hinders their infection by the phages.

For dry biofilms, the combined treatment was not tested, because the phage treatment alone was shown to be inefficient. For free-living bacteria, on the other hand, the single treatment of the phages was so efficient that the remaining bacteria could no longer be quantified with the analytical method used.

Overall, the study shows that the use of phages, as well as the combined treatment with phages and chemical disinfection, is suitable for reducing or removing pathogens on surfaces, especially for biofilms that are difficult to remove with conventional disinfection. However, the researchers say that further investigations are needed before the method can actually be applied in practice.

Cover picture: Bacteriophages use bacteria as hosts and thereby destroy them (Photo: iStock)

Opportunistic pathogens can linger on surfaces in hospital and building plumbing environments, leading to infections in at-risk populations. Furthermore, biofilm-associated bacteria are protected from removal and inactivation protocols such as disinfection. Bacteriophages show promise as tools to treat antibiotic-resistant infections. As such, phages may also be useful in environmental applications to prevent newly acquired infections. In the current study, the potential of synergies between bacteriophage and chemical disinfection against the opportunistic pathogen Pseudomonas aeruginosa was assessed under various conditions. Specifically, surface-associated P. aeruginosa was treated with various concentrations of phages (P1 or JG004), chemical disinfectants (sodium hypochlorite or benzalkonium chloride), or combined sequential treatments under three distinct attachment models (spot inoculations, dry biofilms, and wet biofilms). Phages were very effective at removing bacteria in spot inoculations (>3.2 log10 removal) and wet biofilms (up to 2.6 log10 removal), while phages prevented the regrowth of dry biofilms in the application time. In addition, phage treatment followed by chemical disinfection inactivated P. aeruginosa cells under wet biofilm conditions better than either treatment alone. This effect was hindered when chemical disinfection was applied first, followed by phage treatment, suggesting that the additive benefits of combination treatments are lost when phage is applied last. Furthermore, we confirm previous evidence of greater phage tolerance to benzalkonium chloride than to sodium hypochlorite, informing choices for combination phage-disinfectant approaches. Overall, this paper further supports the potential of using combination phage and chemical disinfectant treatments to improve the inactivation of surface-associated P. aeruginosa.
See DOI
See Institutional Repository
Stachler, E.; Kull, A.; Julian, T. R. (2021) Bacteriophage treatment before chemical disinfection can enhance removal of plastic-surface-associated Pseudomonas aeruginosa, Applied and Environmental Microbiology, 87(20), e00980-21 (12 pp.), doi:10.1128/AEM.00980-21, Institutional Repository
Created by Claudia Carle
Share with others: