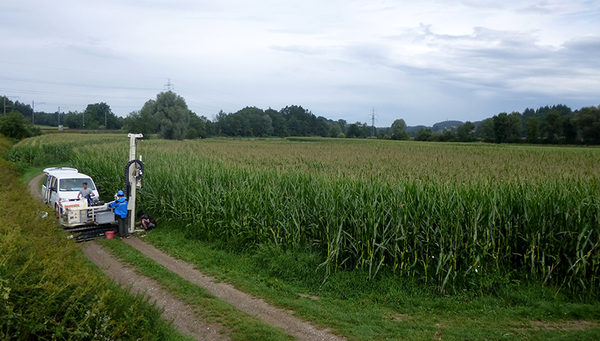 In collaboration with the Centre for Hydrogeology and Geothermal Energy at the University of Neuchâtel, Eawag recently organised a PEAK Course on the controversial topic of “Groundwater and Agriculture”. A major focal point of the information and discussions was the issue of nitrate pollution.

Eawag’s practically-oriented “PEAK” continuing education courses are offered, often in partnership with other institutions, primarily to experts in the field. On November 10th, a course run in collaboration with the University of Neuchâtel on the topic of “Conflicting usage interests: groundwater and agriculture”. The concept and topic of this bi-lingual course proved to be very popular, with the 80 participants filling the seminar room to capacity. The attendees came from both French and German-speaking parts of Switzerland in more or less equal proportions, and were joined by guests from Germany, Austria and Luxembourg.

Course more than proved its worth

In spite of the topic’s potential for sparking emotive controversies, the course went off very constructively, with the first half being devoted to different aspects of groundwater quality. The focal point here was nitrate pollution, although other forms of pollution such as pesticides, pharmaceuticals and uranium were also touched upon. The second half of the course dealt with the topic of groundwater quantity.

Nitrate is not just a recurring theme with the media — the specialists attending the course also attested to the high level of interest in fertilisers and the fate of these substances in groundwater. Possible solutions and approaches were proposed which might ensure that the maximum permitted threshold is not exceeded. Eighty percent of Switzerland’s drinking water comes from groundwater, and the Swiss Water Protection Ordinance stipulates that groundwater used as drinking water must contain no more than 25 milligrams of nitrate per litre. However, levels are in fact above this threshold in many areas.

One fascinating contribution on this subject was delivered by Alain Jaccard, who is responsible for drinking water in the town of Morges, on Lake Geneva. He reported on the project begun in 2002 to collect the drinking water for Morges from the neighbouring region at the foot of the Jura mountains, and bring it into the town. Together with Aurèle Parriaux (professor emeritus of Hydrogeology at the EPFL), Jaccard explained how, after extensive negotiations, the project managers were able to convince all stakeholders of the value of the project, and to agree to the necessary measures. These included making changes to crop rotation and cultivation in the groundwater zone, which, along with other measures resulted in nitrate content being reduced to levels that made it possible to use the groundwater to supply Morges with its drinking water. Spatial planning approaches were also among the topics discussed — for instance, agricultural production could be established in areas where nitrate pollution is low, thus taking pressure off areas where concentrations are high. The government is funding several projects in which various possibilities for reducing nitrate levels are being experimented with. (FOEN - Nitrates)

Clean water is one issue, but equally important is whether there is enough of it. The summer of heatwaves in 2003 provided a foretaste of a potentially more common scenario in the future as a result of climate change: water shortages due to extreme weather conditions. Given that 16% of irrigated land uses groundwater as its source, it is important to know which areas can provide how much water, and what size the relevant reservoirs are. This is the only way in which we will be able to deal competently with extreme conditions and to ensure that there is always sufficient water available.

Agriculture must therefore be realigned to take account of the quality of groundwater as well as its sustainable availability. If we are to solve the conflicts of interest in terms of water usage, the issue must be approached with sensitivity, trust and balance. To this end, exchange of knowledge and experience between the specialists, scientists and practitioners is an imperative, even across linguistic and geographical boundaries.