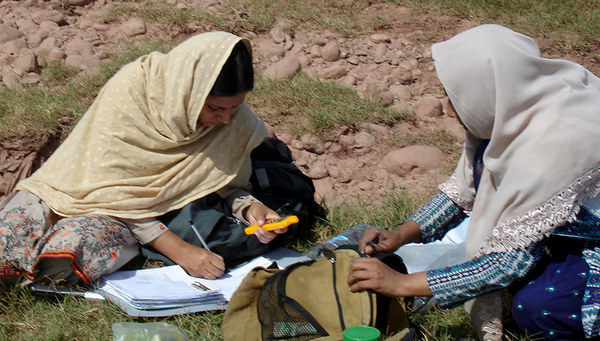 Arsenic-contaminated groundwater used as drinking water or for irrigation may threaten the health of 50 to 60 million people in Pakistan. This is shown by an Eawag-led study – co-financed by SDC – in which data from 1200 groundwater samples was analysed and combined with geological and hydrological parameters to generate a hazard map. This reveals for the first time the full extent of the risks to which the population of Pakistan is exposed. In addition, there is growing evidence that natural arsenic levels are increased by extensive irrigation.

In many parts of the densely populated plains along the Indus River and its tributaries, arsenic concentrations in groundwater supplies exceed the WHO guideline of 10 µg/litre. Very high concentrations, above 200 µg/litre, are found mainly in the south; the highest measured in this study was 500 µg/litre (Fig. 1 and Box).

Arsenic from natural sources can be dissolved in groundwater. Worldwide, according to WHO estimates, around 150 million people rely on groundwater contaminated with arsenic. The relevant processes occurring in aquifers vary according to the geological and hydrological conditions. Concentrations of dissolved arsenic are known to be particularly high in fluvial sediments with abundant organic material and limited oxygen supplies, e.g. in the deltas of the Ganges (Bangladesh) or the Red River (Vietnam); here, arsenic bound to iron oxides is released as a result of the chemically reducing environment. In Pakistan, however, though sediment layers are present along the Indus, reducing conditions are largely lacking. But the new study shows a strong correlation between elevated arsenic concentrations and high soil pH. Infiltration of irrigation water through alkaline topsoil and young alluvial sediments may thus contribute to arsenic enrichment in groundwater. First author Joel Podgorski, a geophysicist at Eawag, stresses that this is still a hypothesis. It is supported by the fact that irrigated areas largely coincide with regions where elevated arsenic concentrations were measured by co-author Ali Shah of COMSATS (Islamabad).

Using a model incorporating topographical, geochemical and hydrological parameters, the researchers created a map (Fig. 2) which, for the first time, shows the probability of increased arsenic concentrations for the whole of Pakistan. Especially in eastern Punjab – which includes Lahore – and around Hyderabad, many people are exposed to a high risk of arsenic contamination; altogether, 50 to 60 million use groundwater which very likely contains more than 50 µg/litre. Podgorski comments: “This is an alarmingly high number, which demonstrates the urgent need to test all drinking water wells in the Indus Plain.” In previous studies, sampling has only been conducted at the village level, and a comprehensive evaluation has not been possible owing to a lack of resources.

Now that the extent of the risk is known, what measures should be taken? Firstly, says Podgorski, water from wells in high-risk areas must be tested. Within a small area, actual concentrations of arsenic often vary widely, and local aquifer conditions cannot be predicted sufficiently accurately by modelling. At the same time, the relationship between extensive irrigation, high soil pH and increased arsenic concentrations in groundwater demands further investigation. If the suspected direct link is confirmed, irrigation techniques would need to be adapted so as to counteract the evaporation and infiltration of irrigation water. Lastly, in areas where groundwater is contaminated, alternative sources of water could be sought (e.g. in deeper-lying aquifers), or – as a last resort – arsenic removal methods could be adopted. At any rate, Podgorski concludes, there is an urgent need to promote awareness raising and coordination of the authorities’ efforts.

This study was part of the project "groundwater assessment platform" (GAP). GAP is co-financed by the Swiss Agency for development and cooperation (SDC).

Arsenic
Arsenic is one of the most common inorganic contaminants found in drinking water worldwide. This metalloid occurs as a natural component of sediments, with small quantities being dissolved in groundwater as a result of weathering. The inorganic salts of arsenic are tasteless and odourless, but highly toxic to humans. If ingested over long periods, even low concentrations can cause damage to health, including hyperpigmentation of the skin, hyperkeratosis on the palms and soles, disorders of liver, cardiovascular and kidney function, and various types of cancer.
Problems arise from the fact that, firstly, arsenic concentrations can vary widely at the local level and, secondly, people in many areas are completely unaware of the risk because their groundwater wells have never been screened for arsenic. Concentrations below 10 µg/L are considered safe. This concentration is therefore recommended by the World Health Organization as a guideline value for arsenic in drinking water. In Pakistan, the official health guideline for arsenic is 50 µg/L.