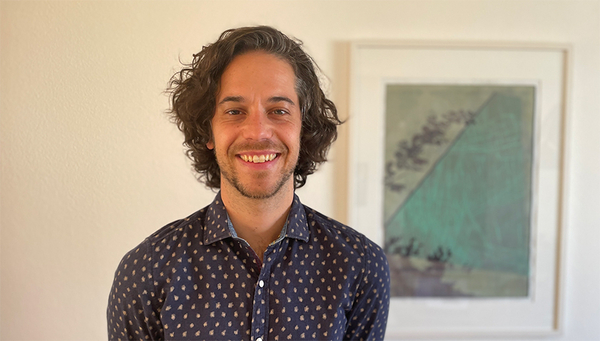 Oliver Schilling spends most of his working time at the University of Basel, where he has been gathering his research group around him as a new assistant professor of hydrogeology since the beginning of March. At the University of Basel, he also heads the “Applied and Environmental Geology” work group, which, among other things, support the two cantons of Basel and regional companies in the management of water, energy and underground resources. Schilling can be found in Dübendorf at least one day a week, where he and his employees exchange ideas and network with colleagues at Eawag.

Some people might be put off by the thought of working in two different places, but Schilling views it differently: “For me, this is a perfect position to start from. Being involved in the structures and the associated knowledge of both institutes is like having your cake and eating it too”. With his team, Schilling is investigating where, how and when groundwater flows through the subsoil near the surface. Most of the Swiss population’s drinking water also comes from this underground zone. His research therefore covers a socially relevant topic: “We are developing methods to assess and predict the regeneration and quality of drinking water,” says Schilling.

In doing so, the researchers combine novel measurement methods with sophisticated mathematical modelling approaches: First, Schilling and his team use tracers to identify how much water from rivers, for example, seep into the subsoil - and then continue to flow underground through sand, pebbles or gravel. “The we use this tracer data to calibrate our models and simulations,” explains Schilling.

His group relies primarily on natural markers already present in the environment – such as inert gases, for example. “These are ideal tracers because they don’t react with other substances in the water or in the soil,” says Schilling. Schilling therefore considers it a privilege that his group is affiliated with Eawag’s Water Resources and Drinking Water Department, where inert gas measurement methods are being developed. “This gives us direct access to unique know-how and state-of-the-art measurement instruments.”

Motorways in the subsoil

Schilling says he is an environmental scientist by profession. It was only during his doctorate that he decided to devote himself fully to the topic of water in the subsoil. Since then the improvement and refinement of hydrogeological models has been the focus of his research interest. In the past, models were based on simple approaches and few measurements. “They were highly simplified,” says Schilling. But today it is increasingly important not only to know the water level, but also to correctly record and map other aspects such as flow velocities, temperatures and the quality of the groundwater.

Because it makes a big difference whether the water only moves slowly through fine-grained sand – or flows much faster through the coarse pores of pebbles and gravel. Gravel deposits are found in the so-called erosion channels of prehistoric rivers that meandered through the Swiss Plateau millions of years ago. Because the groundwater moves much faster in these underground channels, Schilling speaks of “motorways in the subsoil”.

The different flow velocities of groundwater are important, for example, in the designation of protection zones that must be established by law around drinking water wells. Where groundwater flows faster, it also covers a greater distance during the ten-day stay underground (on which, for example, the designation of protection zone S2 is based). Accordingly, such former erosion gullies should definitely be taken into consideration when designating protection zones, explains Schilling.

After studying environmental sciences at the ETH Zurich (2005 to 2011), Oliver Schilling completed his doctorate at the University of Neuchâtel on the interactions between surface waters and groundwater. In 2017 his doctoral thesis was awarded the Leon du Pasquier and Louis Perrier Prize, which is awarded annually to the best dissertation at the faculty of Mathematics and Natural Sciences in Neuchâtel. Schilling then travelled to Canada on a research fellowship, first to the Laval University and then in Australia at Flinders University, before returning to the University of Neuchâtel as researcher in a Horizon 2020 project and coordinator of the Swiss Doctoral School for Water Earth Systems. Since March 2022, Schilling has been Professor of Hydrogeology at the University of Basel and at Eawag.