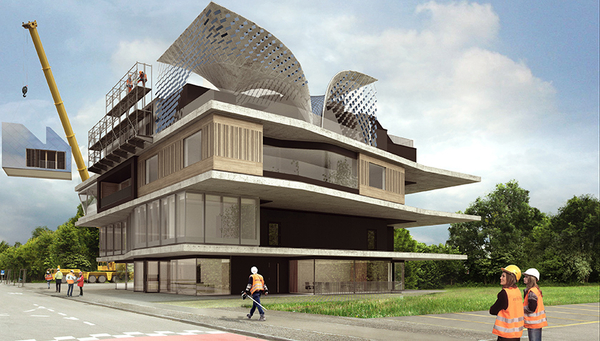 NEST: The house of the future

The construction of the modular research and innovation house NEST got underway at its ground-breaking ceremony on August 26. The building’s frame, its “backbone”, should be completed by the summer of 2015, upon which the first research modules will be installed. NEST is a joint project between industry, research and the public sector conducted by Empa and Eawag and erected on the Empa campus in Dübendorf.

The first sod was cut by Empa Director Gian-Luca Bona and Eawag Director Janet Hering, together with Walter Steinmann, Director of the Swiss Federal Office of Energy (SFOE); Markus Kägi, a member of the Canton of Zurich’s Governing Council; and Lothar Ziörjen, the Mayor of Dübendorf. The project is funded by the federal government, the canton and the municipality. Over the next few years, the one-of-a-kind research house in Europe designed by the Zurich-based architecture firm Gramazio & Kohler will be putting future forms of living and working, new construction methods and new, energy-efficient technologies to the test. This will allow these technologies to reach market maturity more rapidly, which could give the industrial companies involved a major headstart. NEST will be permanently occupied as a guesthouse and the office units used on a daily basis.

Living and working in the future

The four-storey experimental building NEST comprises a core building, the so-called “backbone”, with three open platforms, upon which several independent research and innovation modules can be installed. In these units, apartments, offices and conference rooms of the future are to be researched under everyday conditions, tested and refined. Unlike with conventional houses, mistakes and wrong turns are allowed and even welcomed. Never before was it possible to demonstrate and hone new technologies and systems in a real working environment. Thanks to the exchangeable units, bigger risks can be taken in NEST than in a normal building, which speeds up the knowledge process considerably.

NEST not only researches forms of living and working, but also the energy flows and utility engineering of the houses of tomorrow: The backbone supplies the research modules with water, heat, electricity and an internet connection, and the usage data from the individual modules is analyzed in detail. The construction of the backbone is due for completion in the fall of 2015 and the first research modules are scheduled to be installed by the end of the same year.

In addition to the existing partners from science and industry, other innovative companies that wish to benefit from NEST to develop new products and systems are needed. The latest news and project information is available on the website.

Four teams have already embarked on the implementation phase of their module: Lucerne University of Applied Sciences and Arts is developing an office of the future under the project “meet2create”; in the project “city lifting”, EPF Lausanne is researching a prefabricated housing module, which can be placed on existing town houses. ETH Zurich’s module “HiLo” contains an innovative lightweight construction and an adaptive, attractive façade that is supposed to consume as little energy as possible during its construction and operation. And in Empa’s “Vision Holz” project, a student apartment made of novel materials based on wood is to be built. A fifth module, “Solares Fitness & Wellness“, is being developed in conjunction with the building services association Suissetec and is currently in the preparatory phase.

Pictures can be downloaded from here and the Empa image database www.empa.ch/bilder. Please quote the source and copyright as stated in the caption.