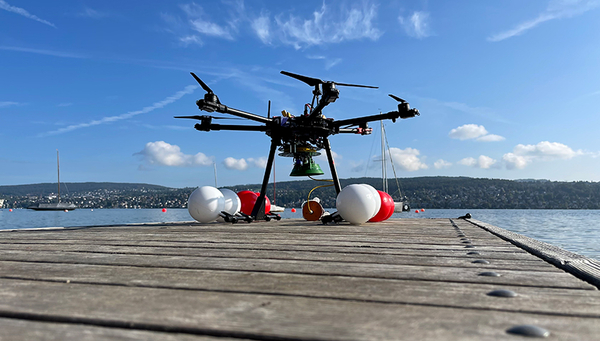 In the future, drones could open up new possibilities for taking water samples fully automatically in remote areas. To this end, Eawag researchers tested a drone model developed at Empa and Imperial College.

Can drones help meticulously monitor the water quality of large water bodies? That is the hope of Francesco Pomati, biologist and Group Leader at the aquatic research institute Eawag. Pomati sees potential, for example, in predicting blue-green algae blooms: every year in summer and autumn, he and his team regularly take water samples for DNA analysis in Lake Greifen to monitor the growth of the potentially toxic blue-green algae. Drones could take over this sampling work – and perform it fully automatically and in multiple lakes simultaneously.

Tests with a system called “Multi-Environment Dual Robot for Underwater Sample Acquisition” – MEDUSA for short – now show that this could in principle work in the future. The drone was developed at Empa and Imperial College London, specifically for the task of touching down on the water surface, taking a water sample and bringing it ashore. The advantage is that MEDUSA’s design allows it to access hard-to-reach areas, and, according to Empa, it could also be used in the future to monitor climate indicators such as temperature changes in Arctic waters.

Read details about the drone in the Empa news piece “A drone that can both fly and dive”.

Watch the video on the 3sat webpage..