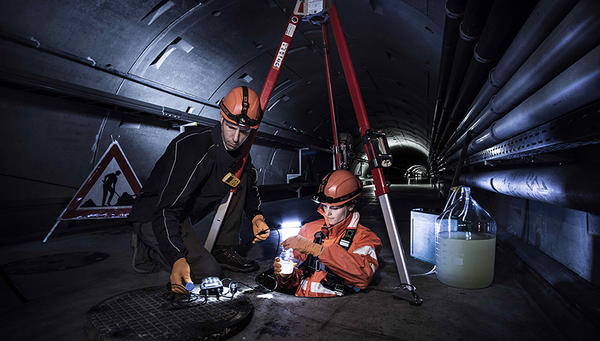 Environmental engineer Christoph Ort is one of the Eawag scientists whose work has been particularly widely covered in the media over the last few years. His research field – drugs in wastewater – is a magnet for journalists. But as Ort explains in this interview, extensive media attention can have downsides as well as benefits for a scientist.
Interview: Mirella Wepf

Your research on drug residues in wastewater has been front-page news for several years now: in 2015 alone, there were more than 200 reports in the media.

First, I should point out that it’s not just my research. There are now more than 30 research groups in 27 countries who coordinate their work and produce co‑authored publications – since 2011, these have included reports for the European Monitoring Centre for Drugs and Drug Addiction (EMCDDA). Although this collaboration reduces the scope for high-profile individual research, it generates useful new ideas. And because our work is transdisciplinary, it’s easier for us to identify research gaps.

But you’re still pleased about the response in the press.

Of course! Though I did complain a bit at first because I had to spend a huge amount of time dealing with media enquiries, and scientists never have enough time anyway. But through the media you can reach people – and new audiences – in a way that you can’t with scientific papers. If the coverage leads to movement on the political front or valuable new contacts arise – in our case, with the Swiss Federal Office of Public Health (FOPH) or the German Federal Ministry of Health (BMG) – then the effort is well worth it.

What do these new contacts involve?

The FOPH is interested in our data and has asked us to develop proposals as to how it could be made more readily exploitable for healthcare purposes. We’re trying to extract reliable information from wastewater so as to generate a kind of fingerprint of the community. Our data could usefully complement other instruments employed by the FOPH – such as drug-use surveys. Though I wouldn’t then be responsible for any further interpretation or practical implications of these findings.

I’m a specialist in the quantification of substances in wastewater systems. But I can’t be expected to draw any social-scientific or health-related conclusions, such as “Zurich has a cocaine problem” or something like that.

Is that what the journalists asked you to do?

Sometimes, yes, more or less. But with the best will in the world I can’t say whether drugs were used by a small number of people or by a large group. I was also disturbed by headlines like “Dortmund is Germany’s cocaine capital”, for which there was no scientific basis. For that, we’d have had to study and compare a lot more cities. In fact, we only have data for 50 European cities. In Germany, we only studied five altogether.

And yet you also produced a ranking of these cities.

We did so mainly because we knew exactly that that’s how the data would be presented by the media. So we at least wanted to prepare the ranking in such a way that it would be correct and consistently used.

But you were still annoyed about some of the headlines.

Most journalists take the text directly from a press release and then summarize it more or less competently. But sometimes things were exaggerated and I really couldn’t see how the authors could justify their claims. One free newspaper claimed, for example, that the government was considering systematically testing wastewater in Switzerland for drug residues. That simply wasn’t true. But that makes you even happier when things turn out well – for example, there was an article in the German daily TAZtypo3/  where the journalist took a lot of trouble, not just with the text, but with the presentation and the photos.

How do you select cities for the European monitoring programme? Or are you now approached by the authorities themselves?

Initially, we just worked with the cities that the researchers in our network already had links with. Over the last five years, our research has involved 87 cities. In 2015, we covered a total population of 38 million people in 75 cities. But we’re not overwhelmed with enquiries. That doesn’t surprise me, because a study of this kind – apart from requiring additional efforts at wastewater treatment plants – also involves a certain reputational risk. Although, as you never know whether the values measured will be higher or lower than anticipated, it can also enhance a city’s image.

Who finances these studies?

At the moment, it’s mainly the institutes conducting the research. Some contributions are also provided by the EMCDDA and the Sewage analysis CORe group Europe (SCORE)typo3/ – a network comprising numerous researchers. But it’s conceivable that, in the future, studies could also be funded by institutions such as the FOPH, the BMG, local health authorities or the police.

How could monitoring be further developed?

We’d like to demonstrate seasonal effects. So far, monitoring hasn’t of course been performed continuously – we’ve only been collecting samples in cities for a week at a time. Although we try to choose a period with no unusual events, we’re certainly not doing long-term monitoring – for that, we lack the logistical and financial resources. But based on the small number of long time series that we’ve obtained to date, we can see that certain drug residues in wastewater vary widely over time. So, to obtain more reliable data with routine measurements over longer periods, we suggest that monitoring programmes should be expanded.

One criticism expressed in the media was that your monitoring relates drug levels to the size of the local population, so that non-residents using drugs in the city are not taken into account.

The advantage of wastewater studies is precisely that they cover – anonymously – the largest possible population. But the system boundaries are defined by the geographical catchment of the treatment plant. Even if we could register commuters and partygoers more precisely, the wastewater still wouldn’t tell us who the main drug users are. But with high-resolution monitoring over longer periods, more detailed conclusions could possibly be drawn concerning drug use, as the residence time of wastewater in sewers is rarely greater than two or three hours.

Some people thought we couldn’t tell whether the drugs we found in wastewater had been used, or thrown away in a raid. But in certain cases we can now distinguish pretty well, because of course we also study the transformation products of drugs. Cocaine, for example, is mainly excreted as the metabolite benzoylecgonine. We’ve discovered that certain excreted substances, such as ketamine, remain stable in sewers. Here, you can draw direct conclusions about consumption. For less stable substances, like amphetamine, we’re in the process of finding out how transformation is affected by environmental parameters such as temperature, oxygen concentrations or pH.

“We’ve had requests to collect samples directly from a bank, the ETH or the World Economic Forum.”

Cannabis is widely used – why wasn’t it measured in all the cities you studied?

Laboratory analysis is more difficult for cannabis residues than for other drugs. And there are also some unresolved questions regarding in-sewer processes. So our knowledge isn’t yet sufficiently mature to allow us to determine actual levels of use and make objective comparisons between cities. But we can detect trends more reliably, provided that the unknown factors which exert an influence remain more or less constant in a city over time.

To what extent is data protection also an issue in this research?

With the aid of a charter, we’ve set ourselves certain ethical boundaries. For example, we don’t study small sub-catchments, so as to avoid discrimination against specific districts or population groups. Of course, with our studies, individuals can’t be traced anyway – that would require urine tests. But wastewater discharged from prisons has been studied at the request of security officials. The aim was to assess the representativeness of random urine testing and the effectiveness of measures designed to control drug use. We’ve also received requests to collect samples directly from a bank, the ETH or the World Economic Forum. However, given the wide variation in drug residues even in the absence of special events, direct sampling in a building requires huge efforts – more than just two wastewater samples. So when people hear what it would cost, they generally lose interest.

How did your interest in drugs as a research topic arise?

In 2008, I started doing postdoctoral research at the University of Queensland in Brisbane, Australia. Originally, I was concentrating on the quantification of hospital wastewater. I wanted to analyse whether compounds from hospitals make up a substantial proportion of municipal wastewater and then assess whether further measures were required. A colleague – a toxicologist – wanted to do some research on drugs. He knew I’d already done a lot of work on sewer systems and was interested in this expertise, because if you want to obtain representative water samples you need a good knowledge of in-sewer dynamics. And so our first collaboration developed, which was followed by a series of new projects. Today, we’re still working together on other questions, such as how to estimate the number of people contributing to wastewater in the course of a day.

Is your research also relevant for traditional urban water management?

Many of our findings on transformation processes in sewers can also be applied to other micropollutants – just as we benefit from research on other substances. But there’s also an indirect benefit: because of the wide interest aroused by this topic, we’ve probably been able to raise awareness among a larger audience of the valuable insights that can be obtained from wastewater. Hopefully, this means that funding will also be made available for research projects which are less media‑friendly but just as important.

What other substances could also be of interest?

Off the top of my head, I’d say biomarkers of diseases. I can imagine data collection in sewers being developed into a kind of early warning system. But wastewater‑based epidemiology isn’t a completely new field: Eawag has already done a lot of work – for example, in the areas of hospital wastewater or antibiotic resistance genes. I think this branch of research will become even more important in the future.

And what are the next research goals for you personally?

I’ll be sticking with wastewater, but increasingly I’ll be focusing on wet-weather discharges. During heavy rainfall, treatment plants can’t cope with all the wastewater, and so some of it is released into the environment untreated. We’d like to characterize these discharges in more detail in selected catchments and thus improve both monitoring and predictions of potentially critical sewer overflows. In elaborating these exposure scenarios, while the focus is no longer on drugs, my experience in this area will be extremely useful, and I’ll also be relying on study methods which we originally developed in connection with drugs.

Did the drugs research make it easier to get funding for the new project?

It’s hard to say. In scientific circles or at the Swiss National Science Foundation, the media response is perhaps less decisive. But a certain visibility is no doubt helpful. And as I mentioned, it also enables you to reach interested parties who don’t read our scientific papers.

Wastewater: an information-rich waste stream
Wastewater contains residues of industrial chemicals, pesticides, cosmetics, pharmaceuticals – and drugs. As well as providing information on potential environmental burdens, wastewater analysis can therefore also be used to estimate drug consumption. Using this approach, comparable data on illicit drug use can be obtained much more rapidly and frequently than with conventional monitoring programmes, e.g. surveys. Because of the small numbers of participants, these give an inadequate picture of consumption at the community level in a specific region and period. Detecting illicit substances in wastewater is challenging: Christoph Ort – leader of the “Pollutants in Sewers” group in the Urban Water Management department – is developing experimental and statistical methods to permit reliable measurement and interpretation of substance flows.