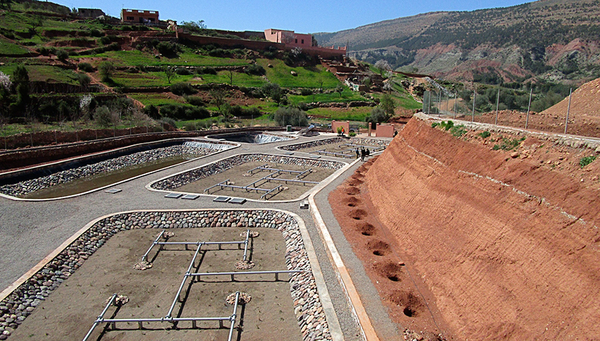 Eawag colleague Bouziane Outiti has been nominated for the 2016 Energy Globe World Award for his wastewater treatment project in Morocco. The award, which will be presented on 10 November at the World Climate Conference in Marrakech, is designed to highlight the existence of sustainable and innovative projects that tackle many of our environmental problems while protecting our resources.

The renowned “International Energy Globe Award” is awarded every year for sustainable and innovative projects in the five categories of soil, fire, water, air and youth. The best of the five winning projects receives the “Energy Globe World Award”. This year, the prize-giving will take place on 10 November as part of the World Climate Conference in Marrakech. An international jury considered around 2,000 applications from 178 countries, and nominated 17 projects as particularly sustainable and innovative. One of the three nominated in the soil category is Eawag colleague Bouziane Outiti, with his wastewater treatment project in the Moroccan Berber villages around Asselda. Bouziane had already received the national <link de news-agenda news-plattform news bouziane-outiti-gewinnt-energy-globe-award-fuer-abwasserbehandlungsprojekt>Energy Globe Award Morocco as the chairman of the “Association Maroco-Suisse pour l’environnement et le développement” AMSED at the beginning of June.

The two villages are located around 50 km south of Marrakech and have 1,200 inhabitants between them, most of whom make their living from agriculture. Before the project was initiated, untreated wastewater flowed from villagers’ houses directly onto the agricultural land and into the nearby river. This not only polluted the environment, but also endangered the health of the villagers. Today, the sewage is treated in a wastewater treatment plant and the cleaned water can be used to water fruit trees. Bouziane Outiti explains: “The system is based on a combination of a reed bed and a wastewater pond. Apart from the automatically-triggered siphon for alternate loading of the plant filters, and the solar pump for watering the orchards, the treatment plant does not require any mechanical equipment or external energy inputs. The plant is also largely free of odours. This particular combination of technology is new to Morocco”. Outiti says that the plant, which became operational in February 2015, has now been successfully handed over to the community and is financially supported by the Ministry of the Interior. “We found a professional company to take on the maintenance, and we make quality control checks through the Association twice a year”, Bouziane Outiti continues. “We are very happy with the cooperation between the national and local government, the private company and our Association, and we are pleased that we are able to be at the award ceremony.”

For further information on the nominated projects and on the Energy Global World Award, go to www.energyglobe.info, where the prize-giving ceremony can also be followed live on 10 November.