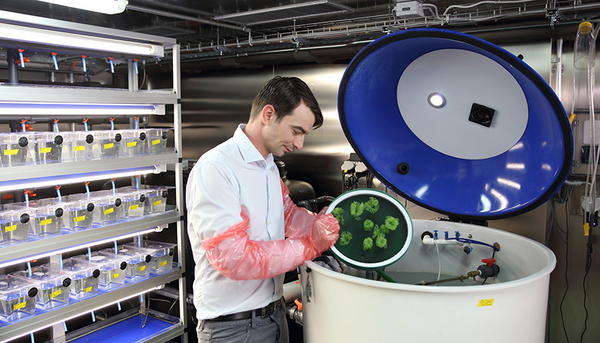 Environmental toxicologists at Eawag have developed new methods to allow tests on new chemicals to be carried out without the need for animal experiments. In place of the conventional experiments using adult fish, the team is now working with fish cells and fish embryos. These alternative methods have numerous advantages, and are seeing increasing demand in industry. This has given rise to an Eawag spin-off. We spoke to its founders.

Why are alternative test methods needed?

Kristin Schirmer: In order for new chemicals to be approved or their presence in wastewater to be analysed, these have to be tested to ascertain whether the substances or water samples present any environmental risks. Tests using algae or water fleas are used for this purpose, but to test the effects on vertebrates, experiments are normally carried out on live fish. Millions of fish die every year for this cause, with the “acute fish toxicity test” enabling government authorities and chemical manufacturers to ascertain at what concentrations of a newly developed product – such as pesticides or additives used in industry – fish die after having been exposed to the chemical in question for 96 hours. The results of these tests are important, but the method used to achieve them is ethically questionable. We want to make a contribution in this controversial area, and develop toxicology further. The approach we use is to work with fish cells and embryos instead of adult fish.
Melanie Knöbel: There is growing demand for fish testing, as the requirements for environmental risk assessments are increasing on the one hand, while the number of new chemicals and products is also continually growing. Alternative methods are therefore desirable as well as worthwhile exploring from a commercial perspective. Our method also enables us to work with our clients even during the product development stage, which in turn helps to avoid a situation where an end product contains hazardous substances.
Stephan Fischer: With the conventional tests, it was always the easily observable effects that were recorded as the result – such as the death or survival of the fish. This does not allow us to understand how these effects are caused. If we are to understand chemical effects more thoroughly, they need to be investigated at earlier stages. We are able to do this with alternative test systems. We can, for instance, identify molecular or biochemical changes in fish cells, or observe changes in the heartbeat or behaviour of fish embryos. This way, we can come up with much more detailed pronouncements than simply “dead or alive”.

How do these alternative test methods work?

Kristin Schirmer: We are able to isolate cells from fish and multiply these in the laboratory to an almost unlimited extent. Such a cell culture is known as a cell line. We can carry out tests using these cell lines and thereby avoid even one single fish having to suffer or die. Instead of the “acute fish toxicity tests”, for example, we use a cell line that was originally derived from the gill cells of a rainbow trout by Canadian colleagues 20 years ago. We expose these cells to the chemicals, and after 24 hours we can already see the effects by looking at the number of cells that are still living. Through our research, we have been able to show that the effective concentrations of chemicals derived from these results agree very reliably with the results from the “acute fish toxicity test”.

The fish cell lines also allow us to study phenomena in isolation, such as the ways in which chemicals activate enzymes that result in detoxification. If we want to analyse the effects on the whole organism, we work with fertilised zebrafish eggs. Experiments at such early stages of a fish’s life – up to 120 hours old – are not deemed to be animal experiments according to European law, as the nervous system of the organism is still underdeveloped. We can thus observe how a whole, developing organism reacts when exposed to a certain chemical. This provides us with more toxicological information about the tested substance and its effects than the conventional test method would. For example, we can measure the activities of transporters that normally transport substances out of the organism but are hindered from carrying out their work by chemicals. Or we can analyse the effects on the cardiovascular system. Thanks to the transparency of embryos, this can be examined in detail using imaging techniques.

Do alternative methods have other advantages aside from removing the need for animal experiments?

Melanie Knöbel: The alternative test methods are often faster – for example, 24 hours for fish cells as opposed to 96 hours for the “acute fish toxicity test”, and they require less of the substance being tested, as well as less space in the laboratory. This means that considerably more substances can be tested at the same time or within a shorter time frame. In addition, thanks to the range of analyses, we can develop predictive models and advise clients on which type of test method is best suited to their products. The conventional tests are very rigid and do not leave much room for manoeuvre.

At the end of last year, you founded the Eawag spin-off, Aquatox-Solutions. How did this development come about?

Stephan Fischer: We are currently the only ones across the whole of Switzerland who are working with fish cell lines. And even tests with fish embryos are not very widely available. For these reasons, we were receiving an increasing number of requests from outside Eawag to carry out tests using these alternative methods. As Eawag does not operate on a commercial basis, we founded the company with the help of Eawag, which gives us a huge amount of support. Over the next five years, we will have the Eawag infrastructure and laboratories at our disposal in return for rent and charges. This provides us with the requisite conditions for developing and establishing ourselves on the market.
Kristin Schirmer: It’s a win-win situation, as we continue the research into alternative methods to replace animal experiments at Eawag. So, we are establishing the fundamentals as environmental toxicologists at Eawag, while everything that is already scientifically established and being applied in practice in this context can be offered through Aquatox-Solutions. Our company is, if you like, the interface between research and practice for alternative test methods. It is important that we also work in partnership with the Ecotox Centre based at Eawag and the École polytechnique fédérale de Lausanne (EPFL). The Ecotox Centre also acts as an interface between research and practice, albeit with a focus on other areas.

What are the current challenges that you are working on?

Kristin Schirmer: Within Eawag we are continuing to work intensively on fundamental research for environmental toxicology. For example, there are always new chemicals that cannot be investigated using the conventional fish test or the alternative methods. We are looking into these problems to find out why this is the case and to develop alternatives. With regard to cell lines and computer models, we are undertaking research into being able to predict the extent to which chemicals accumulate in fish or whether fish growth is affected by chemicals.
Melanie Knöbel: There are also challenges for our company that lie outside the realm of research into chemicals or environmental sampling. The day-to-day operations as well as the whole market presence of our spin-off is new territory for us as scientists. We obtain valuable input from attending business courses and coaching at ETH Zurich.

Have you had any initial successes?

Stephan Fischer: Right after we launched, we secured a very large industrial project. Using a Fish Embryo Toxicity (FET) test, we provide support for investigations analysing chemical effects at the molecular level. We also have another exciting contract in the pipeline. We are close to achieving our most important goal for the first year, which was to acquire a certain volume of client contracts.

What other targets have you set yourselves?

Stephan Fischer: By the end of the year, we want to submit a project proposal to the Commission for Technology and Innovation (CTI). The aim is to develop a widely applicable set of tests for various chemical effects, and to make them practicable. Once we have developed these, we hope to win new clients and expand our portfolio. When we have a solid base of contracts, we would like to take on more colleagues to work with us in the laboratory.
Melanie Knöbel: The continued development of our range of products is a major target for us. The main focus here is on developing flexible test and analysis strategies that are optimally tailored to a client’s particular issues, and that fully exploit the potential for alternative methods.
Kristin Schirmer: In the medium term, we hope to establish a stable base of contracts so that we can stand on our own two feet – with our own laboratory and a larger number of colleagues.

Aquatox-Solutions GmbH
Researchers, government bodies and industry have long been searching for new ways to avoid animal experimentation. A team of researchers, led by Eawag in collaboration with ETH Zurich and ETH Lausanne as well as colleagues from abroad, have developed new strategies in this field. This resulted in three Eawag colleagues setting up the spin-off “aQuaTox-Solutions” in November 2016, based in the municipality of Wallisellen, in order to offer the solutions that have been developed for practical application.

Dr Stephan Fischer, Managing Director. Expert in molecular and cell-based analysis in fish, fish cells and fish embryos, in particular for use in monitoring surface water bodies and waste water. From August 2017, full-time CEO.
Melanie Knöbel, Dipl.-Ing. (UAS) (Engineer) (left), Laboratory technician in the department of Environmental Toxicology at Eawag. She was involved in the development of tests using the rainbow trout gill cell line and was in charge of organising the related international validation study. She was involved in the FET test validation and in the development of the OECD guideline 236 in connection with this. Works in an advisory capacity for the Eawag spin-off alongside her main position.
Prof Dr Kristin Schirmer, Head of the department of Environmental Toxicology at Eawag. Pioneering work with fish cell lines and investigations using fish embryos; works with the spin-off in an advisory capacity alongside her main position.

The focus of Aquatox-Solutions is on toxicological test methods using fish cells and embryos to analyse the effects on the environment of a vast range of chemicals and products. Another business area of the spin-off is the monitoring of water quality in surface water bodies and waste water. The fledgling company focuses on, among other things, the analysis of the regulation of various genes from fish tissue samples, and, here too, on cell line and embryo tests.

In the fish room at Eawag: A spawning tray is placed into a tank in order to obtain zebrafish eggs for the FET (Fisch Embryo Toxicity) test. (Martin Lehmann)

Evaluation of zebrafish eggs in the fish laboratory. (Martin Lehmann)

Being in close proximity to the research – seen here in a project with cell cultures under sterile conditions – is a huge plus for the fledgling company. (Eawag)

Created by Martina Peyer, Andri Bryner
Share with others: