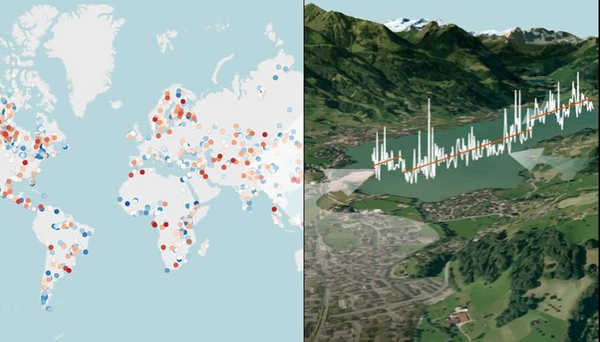 Of over a thousand lakes studied worldwide, about one in ten shows strange behaviour. In general, there is an increasing tendency for aquatic ecosystems to tip over. The ecological stability of lakes is decreasing, especially in regions with low GDP and large human populations.

Lakes are considered precise indicators of climate change and other large-scale changes. Phenomena such as eutrophication and fundamental changes in lake species composition are accordingly well studied. But a global overview of how often such profound—hard to reverse—changes occur in the biological-physical system of a lake and which factors are responsible for them has been lacking until now. Now a new study by researchers from the water research institute Eawag and the University of Montpellier - published today in the journal PNAS - shows that of 1015 lakes studied, 12.8% have been affected by major regime changes, and that the frequency of these abrupt changes is increasing.

The results, which were obtained with the help of satellite images, indicate that the situation of the lakes is quite stable overall. However, the data analyses reveal a connection between geophysical and socio-economic factors and the risk of a lake "tipping over". This risk increases with the population density in the catchment area of the lake. On the other hand, it decreases when the gross national product of this population increases. Environmental scientist and lead author of the study, Luis Gilarranz, sums it up: "Our results show how socio-economic inequalities affect the conservation of natural environments".

Cover picture: The researchers have analysed satellite images and catchment data from over 1000 lakes worldwide (Eawag).