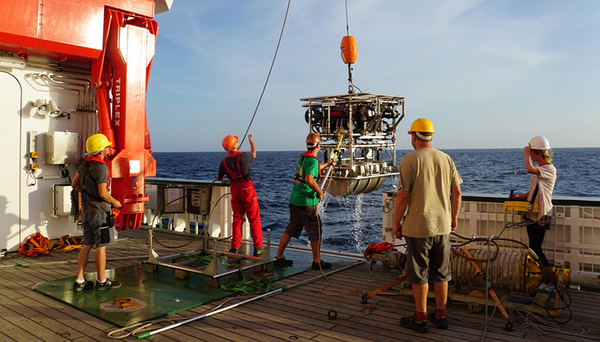 An international research team, including scientists from Eawag, has discovered an uncharted and unusually large hydrothermal vent field – with several black smokers – in the Guaymas Basin in the Gulf of California. This volcanic site is of particular interest for climate research.

Reliable climate predictions are only possible if all the relevant factors are known. Such predictions can be facilitated by knowledge of past global warming events. It has been hypothesized that rapid warming was triggered by increased volcanic activity during the opening of the North Atlantic Ocean around 54 million years ago – an event known as the Paleocene-Eocene Thermal Maximum (PETM).

During an expedition aboard the German deep-sea research vessel «Sonne», the team discovered a hydrothermal vent field with several unusually large black smokers. According to chief scientist Christian Berndt, a geophysicist at Geomar Helmholtz Centre for Ocean Research Kiel: «This is a major discovery, as it could change our views on how carbon is emitted from sedimentary basins. That would have profound consequences for our assessment of the relevance of magmatic systems for the Earth system.»

Following the breakup of continental crust, volcanic activity occurs on the seafloor. Magmatic rocks intrude into existing sediments, and pore water is heated to such an extent that large amounts of carbon previously deposited with sediments are released. Carbon-rich water begins to rise to the surface, where gases including CO2 are then released into the atmosphere.

As such systems were widespread during the opening of the North Atlantic Ocean around 54 million years ago, it is believed that they could have been at least partly responsible for the PETM event. To date, however, it has not been known how active these systems were and what types of carbon compounds were emitted. The Guaymas Basin in the Gulf of California could help to answer these questions, as the seafloor is currently opening and initial intrusions of magma into the sedimentary basin have already occurred.

Based on regional seismic data and echo-soundings, the research team identified possible sites of fluid expulsion. These were then inspected more closely with the aid of the robotic underwater vehicle Hybis. During the first dive, the Hybis cameras revealed an extensive hydrothermal field. Here, fluids vented at a temperature of several hundred degrees Celsius come into contact with cold sea water and immediately precipitate minerals, which are deposited on the seafloor. The hot fluids are rich in methane, which is transported high into the water column.

The hydrothermal field is about 500 meters long and consists of at least four mounds up to 70 metres high. Berndt comments: «Hydrothermal vents are mainly associated with mid-ocean ridges. It’s unusual to see a field of this size at some distance from the spreading axis.» The size and activity of the system suggest that hydrothermal venting may indeed be of relevance for the global climate if it occurs on a large scale during seafloor spreading.

The impact cannot yet be precisely assessed; first, the samples and data need to be analysed in detail. Rolf Kipfer, the Eawag scientist responsible for the analysis of dissolved gases, says: «I’m sure the results will be fascinating.» For the purposes of this expedition, Eawag developed a new method which allowed samples to be analysed on board the vessel. Initial measurements indicated that at least a portion of the dissolved gases must come from the Earth’s crust. In addition, with results rapidly available, it was possible for the sampling strategy to be continuously adjusted during the expedition.

Kipfer was highly impressed by the research vessel’s control systems: “It was remarkable to see how the captain, in choppy waters, could manoeuvre the ship via joystick precisely one metre to the left or right.” This was possible thanks to a dynamic positioning system, which uses computer-controlled propellers and rudders to automatically maintain the ship’s position. Additionally this system employs satellite navigation, motion sensors and wind and wave data.

Life at 1700 metres below the surface

The newly discovered black smokers are also of interest to marine biologists. Although the hydrothermal field lies at a depth of 1700–1800 metres below the sea surface, it is teeming with life. Images from the Hybis camera show, for example, tubeworms – typical of hydrothermal fields – which can grow to a length of 1.5 metres. Among the questions arising for researchers is to what extent the organisms found in the Guaymas Basin are genetically related to populations occurring further south in the Pacific Ocean.