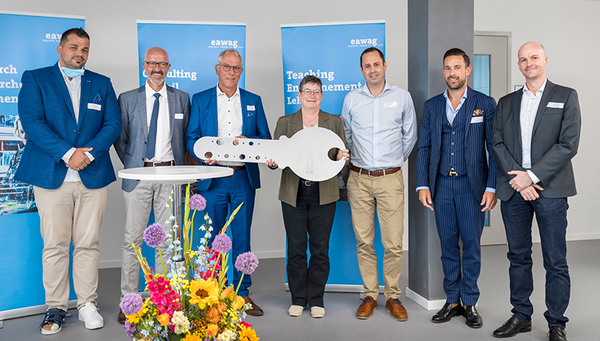 Last week, around 25 guests were able to witness live - and in keeping with Corona- how the large silver key to the new Eawag building symbolically changed hands.

It was an exciting journey to the completion of FLUX, as the mixed use placed a variety of demands on the building that had to be met. In addition, there were other challenges that were not commonplace due to the location of the building: The challenging construction environment near the S-railway track, an underground high-voltage power line and, not to be forgotten, the Chriesbach river. Compared to many other building projects, the planning started in 2014, but the project went ahead quickly and the one or other stumbling block was mastered confidently and collectively. “And that is thanks to the good and motivated cooperation of all those involved,” praised Rik Eggen, Eawag’s deputy director and building owner, in his welcoming address to the guests.

And it is precisely these participants who had gathered in the new building in Dübendorf last Wednesday afternoon to attend the small festive gathering. On site were representatives of the ETH Board and construction companies as well as Empa Bau, the town of Dübendorf and Eawag.

FLUX is a success story

“FLUX is a success all along the line”, emphasised all the speakers in their greeting to the guests. From the idea to the tendering process in a dialogue procedure to the execution by the total service provider Halter Ag together with the architectural firm Fugazzi Steinmann & Partner. “All of them were always concerned with coming up with the best solution for the users, and this commitment can be seen today in the form of the finished FLUX,” Eggen emphasised.

The building is more than impressive. It is bright in its straight lines and generously designed with plenty of room for creative exchange. The “Synthesis Centre”, located on the top floor, exemplifies how architecture for interdisciplinary work can function. And in general, the entire building is designed to create an inspiring atmosphere for the people working there. In addition, FLUX places just as much emphasis on multifunctionality as it does on the state-of-the-art equipment for research and teaching. Not to forget the issue of sustainability: In keeping with the federal government’s role model function, the latest technologies and concepts of sustainable construction were applied in FLUX.

All in all, it is a building of which they are justifiably proud and whose key Eawag Director Janet Hering was happy to accept on behalf of all Eawag employees. With the “key”, the move of the users can now also begin, which should be completed in th summer.