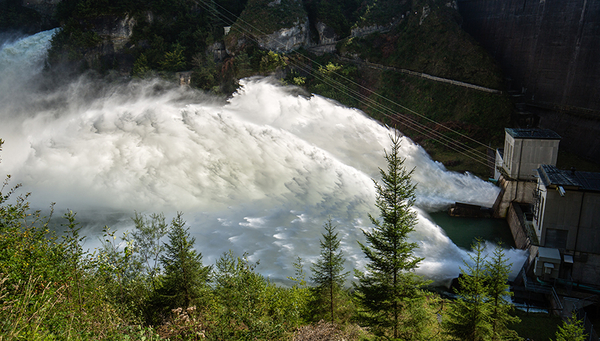 The residual flow in the Sarine River is insufficient to maintain its dynamic flow. Research is currently being carried out as part of the “Energy Turnaround” National Research Programme (NRP 70), to ascertain whether hydropower can be made more environmentally friendly through controlled experimental flooding. The first experimental flood event has taken place, and researchers are now analysing all the data and records that have been collected.

In the Sarine River, the residual flow downstream of the Lake Gruyère reservoir often only amounts to two or three cubic metres per second. This is not enough to ensure that what should in fact be a dynamic habitat, remains so. Instead of the gravel shifting occasionally and uprooting young plants along with it, the gravel and sand banks and the river bed are static and are suffering from an overgrowth of plants and algae. Moreover, further downstream, the river is heavily polluted due to hydropower plants releasing used water in surges. The revised Water Protection Act provides that situations such as this must be remediated. At the same time, the energy transition brings with it added pressure on hydropower. The “Sustainable Flood Plain Management and Hydropower” project is currently investigating how best to create ecological conditions that are as natural as possible, whilst still maintaining hydropower generation. The project, which is a joint undertaking by ZHAW, EPFL and Eawag, is part of the “Energy Turnaround” National Research Programme (NRP 70).

An initial experimental flood took place on 14 and 15 September, which saw over 250 cubic metres of water flowing over the Sarine riverbed. A large number of onlookers were there to watch the spectacle, as the water was released from the Rossens dam in the canton of Fribourg. The researchers took measurements and samples, footage and photographs; from the river bank, in the river, and from drones. Now it is time for the longwinded process of analysing the vast amounts of data, and the results are eagerly awaited. Christopher Robinson, from Eawag’s Department of Aquatic Ecology, strongly believes that the controlled flood will have had a positive impact, even though he would like to have seen the sluice gates opened a little wider still at the dam.

Time lapse video of the flood, taken from the bridge at Hauterive (Source: ZHAW)