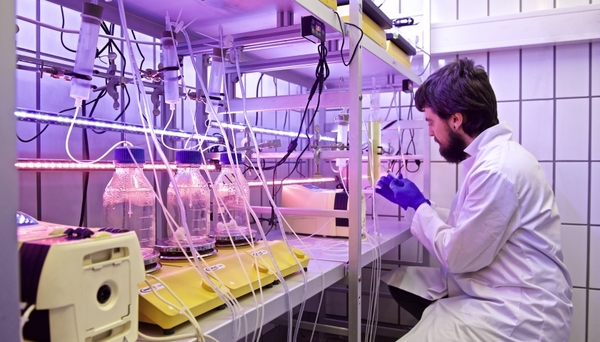 Rapid changes in the genome of two closely interlinked species cannot be explained only by processes such as evolutionary pressure. Equally important is the role played by ecological processes, for example the dynamics of population size. This has been shown for the first time experimentally by an international team of researchers under the direction of Eawag and the University of Konstanz with an alga and a virus. The study will be published today in the magazine Science Advances.

In textbooks on evolution, conceptional and mathematical models explain how a host-parasite relationship affects the genome of both organisms. This is known as coevolution. How this interaction really functions can, on the other hand, be proven in vivo for only a few genes. Studies of the whole genome of both species that also show the progression of this mutual influence over time have never been done before. The origin and survival of biodiversity is, however, often explained by this interaction.

The alga Chlorella variabilis and a chlorovirus that infests it were observed for 100 generations both genetically and also in connection with phenotype alterations. Photo: University of Konstanz

The new study investigated experimentally more than 100 host generations of the alga Chlorella variabilis and the chlorovirus. The researchers were able thereafter to combine data on the development of the population sizes, strength of the agents and genetic changes. They found that adaptations took place quickly and always at the same time. But the changes cannot be explained solely by existing models for coevolution – giving a choice between evolutionary arms race and fluctuating selective dynamics. Change in population size, especially, must also be considered. It was expected that the alga would build up resistance against the virus and that thereafter not much would happen, says evolution biologist Philine Feulner from Eawag, who directed the study along with Lutz Becks from the University of Konstanz. According to the hypothesis, only if the virus mutates and becomes infectious once again, do new genetic mutations in the alga take place. But then came the surprise: even at times during which the selective pressure due to the virus was reduced, the genetic diversity of the alga was quickly established. The massive growth of the population size of the host increased the frequency of mutation, and that in turn created diversity.

Evolution that takes place rapidly and ecological changes have a mutual influence on one another. “This ecoevolutionary dynamic is of fundamental importance for our understanding of molecular evolution and how this takes place in time,” says Feulner.

Media information from the University of Konstanz: https://www.uni-konstanz.de/en/university/news-and-media/current-announcements/press-releases/

Financing: the study was sponsored by the German Research Foundation (DFG) as part of the priority program Rapid Evolutionary Adaptation and is a Lead Agency Project of the DFG and the Swiss National Science Foundation (SNF).