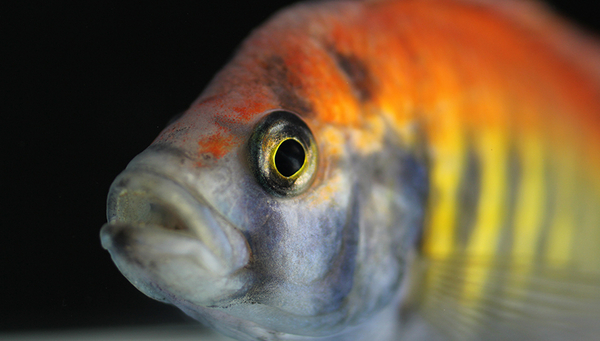 The lakes of East Africa are home to a surprising number of different cichlid species. This level of biodiversity has developed partly due to hybrids that managed to take over new ecological niches in their habitats, according to recent research carried out by scientists at the Swiss Federal Institute of Aquatic Science and Technology, Eawag, and the University of Bern.

When two individuals from different species mate, the offspring is known as a hybrid. As a result of the genomes being mixed, sometimes phenotypes are produced that deal with new environmental conditions better than the two parent species. Very often, hybrids are not able to reproduce, but there are quite a number of exceptions to this, including the cichlids. New species can emerge from such fertile hybrid populations. In other cases, however, hybrids are less well-suited to their environment and so contribute little to the gene pool of future generations. Which of these situations arises depends, among other things, on how many unoccupied ecological niches exist in the hybrids’ habitat.

In several earlier studies, Ole Seehausen and his team at Eawag and the University of Bern have highlighted the probable importance of hybridisation for the development of biodiversity in African lakes. Seehausen and his colleague Oliver Selz have now performed laboratory experiments with cichlids from Lake Victoria in Africa, in order to investigate the ecological mechanisms behind this phenomenon.

They discovered that hybrids are less efficient at using the food that the parent species are specialised to eat. But if the available food is expanded beyond the ecological niches of the parent species, hybrids are often then better able to exploit these new niches than their parents. Diverse ecosystems with as-yet unoccupied niches could therefore favour the emergence of new species.

Another recent study that was reported in the journal Nature Communications also highlights the influence of hybridisation on speciation. Joana Meier and Ole Seehausen worked with an international research team to investigate the biodiversity and evolutionary history of fish in two large neighbouring African lakes – Lake Bangweulu and Lake Mweru. While eleven cichlid species colonised Lake Mweru from the Congo and Zambezi Rivers, only six species from the Zambezi ended up in Lake Bangweulu.

The process of adaptive radiation was classically hypothesized to require isolation of a lineage from its source (no gene flow) and from related species (no competition). Alternatively, hybridization between species may generate genetic variation that facilitates adaptive radiation. Here we study haplochromine cichlid assemblages in two African Great Lakes to test these hypotheses. Greater biotic isolation (fewer lineages) predicts fewer constraints by competition and hence more ecological opportunity in Lake Bangweulu, whereas opportunity for hybridization predicts increased genetic potential in Lake Mweru. In Lake Bangweulu, we find no evidence for hybridization but also no adaptive radiation. We show that the Bangweulu lineages also colonized Lake Mweru, where they hybridized with Congolese lineages and then underwent multiple adaptive radiations that are strikingly complementary in ecology and morphology. Our data suggest that the presence of several related lineages does not necessarily prevent adaptive radiation, although it constrains the trajectories of morphological diversification. It might instead facilitate adaptive radiation when hybridization generates genetic variation, without which radiation may start much later, progress more slowly or never occur.
See DOI
See Institutional Repository
Meier, J. I.; Stelkens, R. B.; Joyce, D. A.; Mwaiko, S.; Phiri, N.; Schliewen, U. K.; Selz, O. M.; Wagner, C. E.; Katongo, C.; Seehausen, O. (2019) The coincidence of ecological opportunity with hybridization explains rapid adaptive radiation in Lake Mweru cichlid fishes, Nature Communications, 10, 5391 (11 pp.), doi:10.1038/s41467-019-13278-z, Institutional Repository
Created by Stephanie Schnydrig
Share with others: