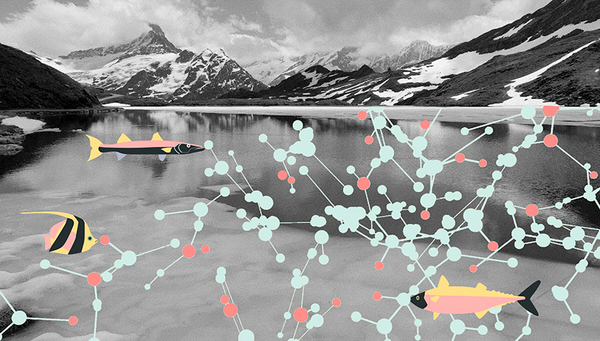 Even though industrial wastewater is treated at state-of-the art plants, the sheer variety of synthetic organic compounds from the chemical and pharmaceutical industry which end up in surface waters are seriously underestimated. This is shown by a new study carried out by Eawag and ETH Zurich.

Certain sources of chemical pollution of the aquatic environment, such as agriculture or municipal wastewater, are now reasonably well known. But knowledge of the quantities and diversity of synthetic organic compounds released in industrial wastewater from chemical and pharmaceutical production remains fragmentary. This is not unproblematic, as the substances in question include compounds which are highly persistent, bioaccumulative or may promote the development of antibiotic resistance. In addition, many substances slip through the net of conventional monitoring since they are simply not targeted.

In this nationwide study, effluents from 11 wastewater treatment plants (WWTPs) were investigated in detail over a period of several months. At the WWTPs selected, discharges from industry made up a widely varying proportion of the wastewater treated – from 0 to 100%. Effluent samples were analysed using (partly automated) high-resolution mass spectrometry. It was thus possible to determine the total number of compounds present and also to monitor substances for which only short-term peaks were detected. The findings of this extensive sampling campaign were essentially threefold:

The scientists involved in the study conclude that current water quality assessment practices are inadequate. Today, monitoring generally involves analysis of a standard list of target compounds and certain sum parameters, rather than consideration of the individual situation. But, as the scientists argue, this would be essential if suitable monitoring programmes are to be developed and – where necessary – mitigation measures adopted. Mitigation strategies require a multifaceted approach, ranging from changes in companies’ wastewater handling and innovations at WWTPs, to modifications of production processes and legal regulations, or even prohibition of certain substances. Industrial companies are already successfully implementing some of the measures.

This study presents a nation-wide assessment of the influence of chemical and pharmaceutical manufacturing (CPM) wastewaters on synthetic organic contaminant (SOC) emissions to Swiss surface waters. Geographic Information System (GIS) based analysis of the presence of CPM in wastewater treatment plant (WWTP) catchments revealed wide distribution of this industrial sector across Switzerland, suggesting that one-third of the 718 Swiss WWTPs may be influenced by CPM wastewaters. To reflect the diversity of this type of wastewaters, we investigated the effluents of 11 WWTPs of diverse sizes and technologies, which treated 0-100% wastewater from a variety of CPM activities. In an extensive sampling campaign, we collected temporally high resolved (i.e., daily) samples for 2-3 months to capture the dynamics of CPM discharges. The > 850 samples were then measured with liquid chromatography high-resolution mass spectrometry (LC-HRMS). Non-target characterization of the LC-HRMS time series datasets revealed that CPM wastewaters left a highly variable and site-specific signature in the effluents of the WWTPs. Particularly, compared to WWTPs with purely domestic input, a larger variety of substances (up to 15 times more compounds) with higher maximum concentrations (1-2 orders of magnitude) and more uncommon substances were found in CPM-influenced effluents. Moreover, in the latter, highly fluctuating discharges often contributed to a substantial fraction of the overall emissions. The largely varying characteristics of CPM discharges between different facilities were primarily related to the type of activities at the industries (i.e., production versus processing of chemicals) as well as to the pre-treatment and storage of CPM wastewaters. Eventually, for one WWTP, LC-HRMS time series were correlated with ecotoxicity time series obtained from bioassays and major toxic components could be identified. Overall, in view of their potential relevance to water quality, a strong focus on SOC discharges from CPM is essential, including the design of situation-specific monitoring, as well as risk assessment and mitigation strategies that consider the variability of industrial emissions.
See DOI
See Institutional Repository
Anliker, S.; Santiago, S.; Fenner, K.; Singer, H. (2022) Large-scale assessment of organic contaminant emissions from chemical and pharmaceutical manufacturing into Swiss surface waters, Water Research, 215, 118221 (10 pp.), doi:10.1016/j.watres.2022.118221, Institutional Repository

The study on which this text is based (original publication) was co-funded by the Federal Office for the Environment (FOEN). The authors also thank in particular the companies concerned, the cantonal authorities and the WWTP personnel involved.