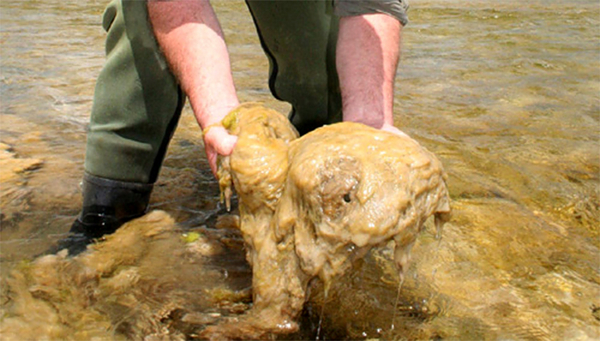 On invitation of Eawags department for Aquatic Ecology over 40 experts from local and central government, environmental consultancies and research organisations participated on 31st October the first workshop on aquatic invasive species. Far too often, it is ‘just’ goldenrods or grey squirrels that are talked about – and what creeps in or is introduced under the surface of the water gets forgotten.

After Lukas De Ventura’s opening presentation on his ongoing dissertation on zebra and quagga mussels, other fascinating talks followed, coming from a wide range of perspectives.

Christoph Küffer (ETH) showed how controversial public perception is in regard to research into the newcomers. The tone ranges from “a lot of fuss about nothing” to “the entire world’s population under threat”. By a slip of the tongue, Küffer also inadvertently coined the term “Naturschtutz” – perhaps symbolic of the high costs of tackling alien invasive species as opposed to the idealistic and possibly outdated vision of “Naturschutz”, or environmental protection? In the group work, Bruno Baur (Uni Basel) interpreted a similar line of tension between “keeping everything as it was 150 years ago” and a trivialised landscape, using the pair of terms “Ballenbergisation versus McDonaldisation” (referring to the Ballenberg open-air rural museum).

Gian-Reto Walther from Bafu explained how the measures to tackle neozoa have been incorporated into the biodiversity strategy, and summarised the legal basis. Walther also appealed to people not only to observe the new species in their explosion phase, but to keep an eye on their population dynamics in general. In addition, he said more standardised methods were needed in terms of assessing damage potential. Jsabelle Buckelmüller (Awel, ZH) talked about processing data on neobiota in the GIS (with its own layer for aquatic neozoa) as well as the cooperation between the Cantons and central government. She highlighted several combative and preventative measures that have already been taken, such as the Zurich regulation which does not allow a single pebble to be transported to a different catchment area from, or upstream of, a body of water where neozoa are present. Joachim Hürlimann (Aquaplus) told how he had found the didymosphenia alga in the Graubünden river Julia – an alga that forms extensive carpets in New Zealand, for example (see picture).

Hürlimann made no secret of the fact that neobiota helped his organisation with some lucrative contracts. In order to ensure that he himself does not contribute to the spread of these species, he spoke about how the electrofishing equipment is disinfected after every time it is used. He attested to at least one good aspect of the zebra mussel, in that the mussel flesh can be used as an indicator for pollutants, thanks to bioaccumulation.

Taking action before you can see clearly beyond four decimal places

Florian Altermatt (Eawag) emphasised with examples how science is not as clueless as it is sometimes made out to be. The question is simply whether the call for control measures is heard early enough, in other words, before an alien species becomes a problem. Patricia Holm (Uni Basel) among others spoke along the same lines: measures to control the spread of the Round Goby (pictured above) must and can be taken NOW, for, once this spawn predator (thought to have been introduced via ballast water in Rhine ships) manages to get past the Rheinfelden power station, its advance up the Rhine and the Aare will be virtually unstoppable.

The discussion after the group workshops showed clearly that the exchange of information in this field was felt to be very valuable, and should be repeated. The list of desirables is long, admittedly – it includes, for example, a central database, a comprehensive web platform and standardised teaching materials. However, on the other hand there are already many useful tools in place as well as plenty of goodwill for making headway together on aquatic invasive species. Disinfecting boats and water sports equipment, and awareness in the pet and aquarium trades are just two of the watchwords in this process. The participants were also in agreement however, that dealing with neobiota also throws up questions which are answered differently depending on the interest group: for example, whether an artificial barrier should be removed as part of a revitalisation programme, or whether it can actually prevent the advancement of the signal crayfish into the upper reaches of a river.