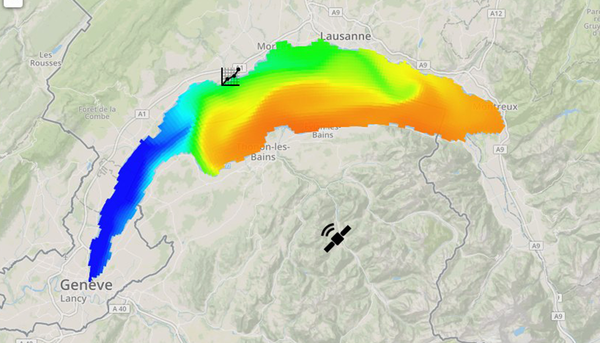 If the wind blows away the warm surface waters of a lake, cold water flows in from the depths. As a result of this effect the temperature in Lake Geneva recently sank to 8 degrees. A project led by Eawag and EPFL had predicted this cooling event.

On Wednesday 28th June, Geneva’s residents were swimming in waters of 23 degrees at the Bain des Pâquis beach on Lake Geneva. Forty-eight hours later, on Saturday morning, 1 July, the water temperature at the same location had plummeted to a chilly 8 degrees. In the entire lower lake basin, the Petit Lac, from Rolle to Geneva, the surface temperature had sunk to 15 degrees. The culprit was a continual south-westerly wind that pushed the upper, well-warmed water layer to the northeast. Cold water from the depths flowed in – a phenomenon known as upwelling in Lake Geneva as well as elsewhere. It is seldom so extreme, and those who were not forewarned were unpleasantly surprised when entering the water. “I had to put my wetsuit on”, said a sport swimmer to the newspaper Le Temps: “It was like swimming at Christmastime.”

Most frequent in early summer

Prof. Alfred Wüest is director of the lake physics laboratory in Lausanne, which is jointly managed by Eawag and the EPFL. He explains the latest upwelling in Lake Geneva: “The longer and deeper the lake, and the longer the wind blows from the same direction, the stronger the effect”. In addition, the warm surface layer is now, at the start of summer, relatively thin. Only the uppermost 3 to 4 metres are warmed up, and below this level the temperature sinks rapidly. “This is like the top layer of cream in a milk jug”, says Wüest, “If it is blown away, the fresh milk below can be seen.” The residents of Geneva could do little more than get their feet wet in the 8-degree waters, and in Lausanne the chilly, 15-degree waters were rising to the surface, whereas, meanwhile in Montreaux and Évian-les-Bains, the lake remained at a temperature of 22 degrees.

Predictions from a model

Researchers have created a model which can be accessed by the public on the website , which uses current and predicted data from MeteoSchweiz, hydrological data from the Federal Office for the Environment and satellite data to map the lake water temperatures. The model can forecast from three to five days into the future, and it made a very accurate prediction of the upwelling phenomenon on 1 July. It is available for Lake Geneva, Lake Biel and Lake Greifen. The website was created by EPFL doctoral student Theo Baracchini, and has also recently been made available as an app for mobile phones (Android: meteolakes).

Eawag’s Damien Bouffard is director of the parent project Coresim, financed by the European Space Agency ESA. The acronym stands for “Coupling Remote Sensing In Situ and Models” – the integration of increasingly detailed time and space data from satellites, earth stations and models.

Bouffard is pleased that swimmers and event organizers are making use of the water-temperature predictions. But his chief aim is to create added value for research. At present, only monthly measurements are available for many lakes. Scientists who wish to couple their own data, e.g. on the distribution of nutrients in the lake, with lake physics, would have to work out a great many interpolations, he says. In the future, feedback between measured and modelled data will optimise data quality and thus improve research results as well as assist lake-management decision-making.

Surface temperatures in Lake Geneva on 1.7.2017: while in Geneva and on the southwest shore near Nyon, temperatures below 10 degrees were recorded, in Évian swimmers were enjoying 22 to 23-degree waters.
(Source: meteolakes.epfl.ch)