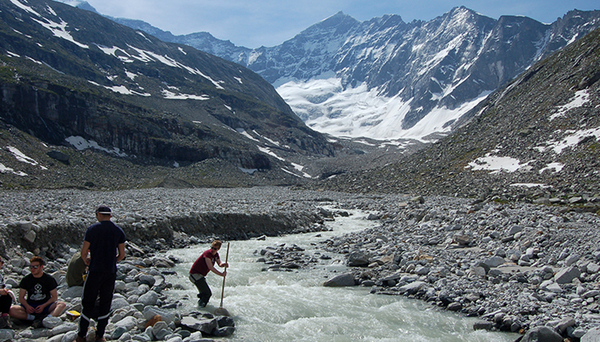 River invertebrates react the same way to decreasing glacier cover wherever in the world they are, say scientists who have evaluated more than one million of them in diverse regions with shrinking glaciers, to determine the impact of global environmental change. Their findings are published today in Nature Ecology & Evolution.

The study was led by Professor Lee Brown from the University of Leeds and was run in close collaboration with scientists from numerous other institutes and universities, including Christopher Robinson from Eawag. The team combined data on river invertebrates collected from over 170 sites in nine different mountain ranges — spanning across three continents and both hemispheres. Their findings indicate that there is a globally consistent pattern in the way river invertebrates respond to decreasing glacier cover. It highlights the possibility of applying a similar method to track environmental impacts on invertebrate groups in other types of ecosystems, such as the oceans, soils or even in cities.

Co-Author Christopher Robinson explains: “Our glaciers are receding rapidly with concomitant changes in river flows and the transport of material to downstream waters and to the sea. These changes will have ultimate effects on humans and population demographics. We are currently studying the effects of glacial recession in stream intermittency and the functional properties of our Alpine catchments, in part based from the results of the analyses presented in this paper.”