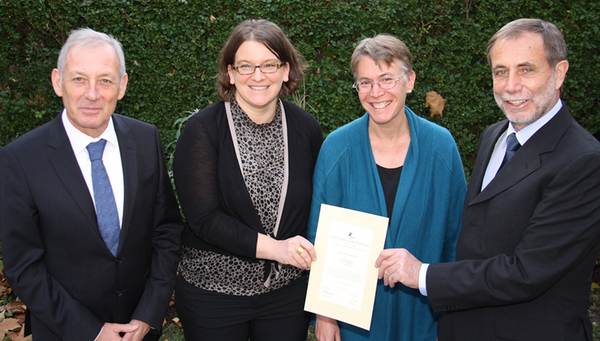 The award ceremony took place in the hall of the Graubünden Cantonal Parliament before around 70 invited guests from the political, commercial and research spheres, with fine musical accompaniment by the Ensemble Quatro Colori of the Kammerphilharmonie Graubünden. The laudatory speech was given by Martin Weglin’s line-manager of many years’ standing at Eawag, Roland Schertenleib. As the awardee was receiving the prize not just for the well-known Sodis Project, but for his life’s work, Schertenleib looked back on Wegelin’s whole career. He made particular mention of the research and introduction of horizontal gravel filters for pre-purification of turbid water before it is further purified for drinking. This was ground-breaking work, said Schertenleib, and the principle is still being applied in Switzerland among other places – although here it is used in groundwater enrichment. “A nice example”, he said, “of how development aid can also happen from the south northwards.”

In his own speech, Martin Wegelin also looked a long way back into the past: he recalled, for example, his love-hate relationship with the stones which he used to have to gather up in his father’s vineyard, but which led him to the idea of the gravel filters. But the awardee’s main message – a very emotional one – was one of humanity. As he walked away from the lectern and asked the guests how they were doing, the hall was absolutely quiet. This was someone who is himself moved and who can move others – helping each other, giving support where it is most needed, and reaping the warmth and contentedness amongst friends that grows as a result in the community. This was the crux of Martin Wegelin’s speech. He expressed particular gratitude to the many women whose job it is to fetch water, and who therefore engage themselves in projects such as Sodis – for example Elsa Sanches, the Director of the Fundacion Sodis in Bolivia.

Former member of the Council of States, Carlo Schmid-Sutter seized the opportunity as Chairman of the Foundation Board to tie in the award-giving with a fervent appeal for the support of applied research. With a glance across at the ETH Board Chairman and Schmid’s former Council of States colleague, Fritz Schiesser, who was also present, Schmid stressed the equal importance, alongside the highly specialised research into elementary particles, of the quest for appropriate solutions to humanitarian deficiencies. Schmid ended his appeal by saying “looked at this way, Eawag is just as important and good as CERN”.