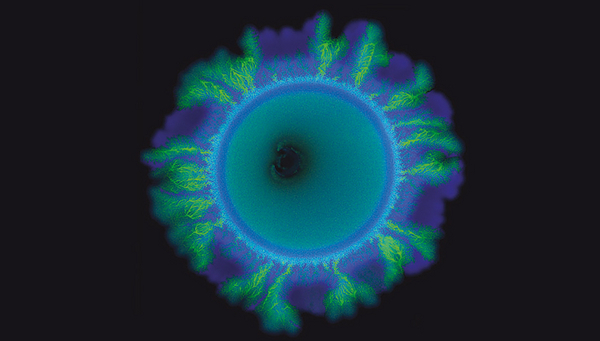 Microbes self-organise to grow into fascinating and complex patterns. The diversity of these patterns depends on a previously unknown factor, as researchers at Eawag have discovered. This might re-define how we view the concept of microbial biodiversity.

The microbes in our gut help us digest food, and help us to defend against pathogens. For pathogens to infect us, they must compete with the variety of healthy microbial species present in the gut. The more diverse this collection of species is, the harder it is for a pathogen to take hold. Therefore, a high intestinal microbial biodiversity keeps us healthy. Microbial biodiversity is also important in other contexts. For example, it can be used to determine whether microbial communities in wastewater treatment plants are likely to degrade specific pollutants.

However, there might be more to biodiversity than just the number and abundance of species. According to new research by David Johnson’s group at the aquatic research institute Eawag, the biodiversity of microbial communities depends not only on the diversity of species, but also on the diversity of spatial patterns that different strains or species of bacteria form as they grow. Such patterns arise as different species self-organise across space during their growth.

There must be another factor

Until now, researchers assumed that two factors were decisive for the shape of these spatial patterns: The genetically encoded traits of each species, as well as the environmental conditions in which they grow. However, when Johnson and his team tested this assumption, they were surprised by their results. When they controlled for both, genotype and environment, they saw that there must be another factor that determines the shape of these patterns.

For their experiment, the team engineered two strains of the soil bacterium Pseudomonas stutzeri that had exactly the same genomic information except for one gene. This gene determined whether a strain was a producer or a consumer of the molecule nitrite. The strain that was a nitrite producer was labelled such that it appeared blue under the microscope, while the nitrite consumer appeared green.

When the researchers mixed these two strains in a one-to-one ratio and distributed them randomly across a surface, they expected to see the formation of a uniform spatial pattern. For example, a contiguous outer layer of blue bacteria followed by an inner layer of green bacteria, determined by the fact that the blue producer strain would grow first and the green consumer strain later.

However, this is not what the researchers observed. The green strain started growing out in branched structures, irregularly interspersed by smooth areas of the blue strain. “We did not expect these two different spatial patterns to form at the same time”, says Johnson. It took him and his team about eight years to figure out what was going on.

At first, they thought that the strains had become genetically diverse. However, after painstaking analysis of many bacterial sequences, they found that this was not the case. Genetic diversification could not explain the observed spatial pattern diversification.

What could then explain this? The answer was: chance. When a mixture of microbial cells – in this case, two different strains mixed at a one-to-one ratio – is randomly distributed on a growth medium, the different cells are not evenly spaced out at equidistance to one another. Instead, purely by chance, they can clump together. This is called „Poisson clumping“, and it gives rise to the distinct patterns that Johnson and his colleagues observed.

It is pure physics

In their experimental system, the mechanism works like this: If initially a blue producer-cell comes to lie behind a clump of green cells, the blue cell encounters a physical barrier of green cells as it grows. The blue cells push the lump of green cells forward, eventually causing them to grow into the tree-like patterns observed by the researchers. “The pattern diversification had nothing to do with new genetic changes, or heterogeneity in their growth environment”, says Johnson. “It is pure physics, mechanical forces acting on an initially random distribution of cells that caused the pattern diversification”.

Not as simple as Lego

“I had always thought of microbial communities as Lego sets”, says Johnson. If you have the different pieces – that is, the different types of microbes – and the instructions for use – that is, the information about how they interact with each other under a set of environmental conditions – then you know the shape of the assembled Lego toy – that is, the spatial arrangement of different species. "It turns out that microbial communities are not as simple as Lego, you can get very different toys with the same instruction manual”. Johnson's fascination with the beauty of these complex patterns is evident in the colourful pictures that adorn his office, showing microscope images of microbial branching and networks in bright colours.

The fact that these patterns are not just beautiful, but also might constitute a new form of biodiversity, has very practical consequences because different patterns confer different properties to the community. One such property is the ability to transfer antibiotic resistance genes between different species or strains. Such genes are often introduced into the soil via agricultural waste. There, they can be taken up and passed on by spatially organised communities of soil bacteria. How well this process works could depend on the diversity of spatial patterns and is currently being studied in Johnson's lab.

Surface-attached microbial communities constitute a vast amount of life on our planet. They contribute to all major biogeochemical cycles, provide essential services to our society and environment, and have important effects on human health and disease. They typically consist of different interacting genotypes that arrange themselves non-randomly across space (referred to hereafter as spatial self-organization). While spatial self-organization is important for the functioning, ecology, and evolution of these communities, the underlying determinants of spatial self-organization remain unclear. Here, we performed a combination of experiments, statistical modeling, and mathematical simulations with a synthetic cross-feeding microbial community consisting of two isogenic strains. We found that two different patterns of spatial self-organization emerged at the same length and time scales, thus demonstrating pattern diversification. This pattern diversification was not caused by initial environmental heterogeneity or by genetic heterogeneity within populations. Instead, it was caused by nongenetic heterogeneity within populations, and we provide evidence that the source of this nongenetic heterogeneity is local differences in the initial spatial positionings of individuals. We further demonstrate that the different patterns exhibit different community-level properties; namely, they have different expansion speeds. Together, our results demonstrate that pattern diversification can emerge in the absence of initial environmental heterogeneity or genetic heterogeneity within populations and can affect community-level properties, thus providing novel insights into the causes and consequences of microbial spatial self-organization.
See DOI
See Institutional Repository
Goldschmidt, F.; Caduff, L.; Johnson, D. R. (2021) Causes and consequences of pattern diversification in a spatially self-organizing microbial community, ISME Journal, 15(8), 2415-2426, doi:10.1038/s41396-021-00942-w, Institutional Repository