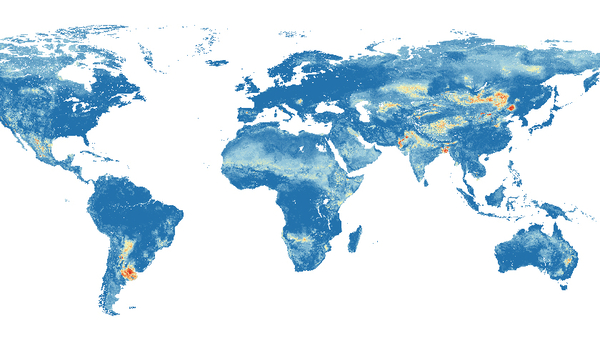 Today, one third of the world’s population obtains its drinking water and water for irrigation from groundwater reserves. Global population growth and water scarcity due to climate change mean that the pressure on this resource is continually increasing. However, many wells are contaminated with naturally occurring arsenic. When ingested over a long period of time, the metalloid can cause liver, kidney and heart damage as well as cancer.

Michael Berg and his team from Eawag's Water Resources and Drinking Water Department have already carried out various studies to determine the extent of arsenic-contaminated groundwater aquifers: Firstly, the researchers found toxic arsenic concentrations in groundwater during field work in Cambodia, Vietnam, and the Amazon region. They then developed regional arsenic risk maps for China, Pakistan and South East Asia.

Now researchers led by Eawag geophysicist Joel Podgorski have developed a global risk model. This is based on a self-learning algorithm that is fed with the latest data on geology, soil properties, climate and around 200,000 specific arsenic concentration measurements. “The result is the most accurate and detailed risk map to date on the global scale of groundwater arsenic pollution,” explains Podgorski, lead author of the study. It has now been published in the renowned journal “Science” and was co-financed by the Swiss Agency for Cooperation and Development (SDC).

In addition to the geological parameters, figures on population density and statistics on groundwater use are also included in the risk model. The researchers were thus able to calculate that between 94 and 220 million people are potentially affected by arsenic contamination in drinking water.

While some hotspots have been known for a long time, such as parts of South and South East Asia, they also identified previously unknown areas. For example, the hazard map shows parts of Central Asia, the Sahel and other regions of Africa as potentially arsenic contaminated regions.

However, the models have too low a resolution to determine the arsenic contamination of individual groundwater wells. “These maps serve as a basis for determining where targeted arsenic tests should be conducted,” says Michael Berg.