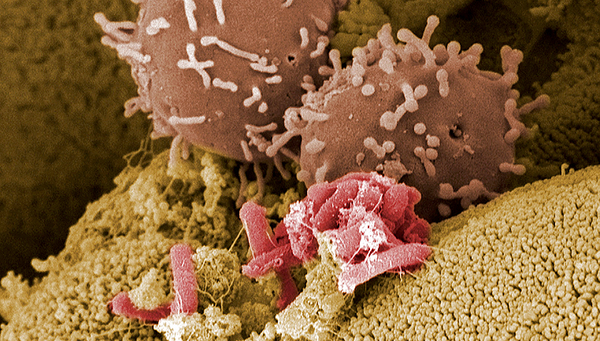 Pathogenic salmonellae rely on a division of labour: some of them see to the common wellbeing, while others are able to stand up to free rider salmonellae better. This teamwork bears certain similarities to that of bee and ant colonies and is the salmonellae’s recipe for success in colonising the gut.

Being fertile and breeding: as with all organisms, reproduction and the proliferation of one’s genes is also the essence of life for the pathogenic bacterial species Salmonella typhimurium. These microorganisms have chosen the intestines of vertebrates as their breeding site – a biological niche where they have to assert themselves, including against other bacteria. However, the pathogens also have to hold their ground against “free riders” – mutants of their own species that have lost their longer-term survival capabilities.

A few years ago, a team of scientists headed by Wolf-Dietrich Hardt, a professor at the Institute of Microbiology, and Martin Ackermann, a professor at the Department of Environmental Systems Science and head of the department for environmental microbiology at Eawag, discovered that the salmonellae in intestines of infected mice exist in two different conditions, only one of which triggers the familiar diarrhoeal disease. Now, in a paper published in the journal Nature, the researchers show that the second condition is also important. The salmonellae’s recipe for success is down to the teamwork of the two conditions. “Only by teaming up are they more successful than the mutants they compete with,” says Hardt.

Genetically speaking, the two subtypes are identical. However, they differ in terms of whether they produce a protein machine called T1, which enables the microorganisms to enter the intestinal mucosa from inside the gut and trigger an inflammatory response. As a result of this inflammation, the ecological conditions change inside the gut, allowing the salmonellae to grow more quickly than the bacteria of the resident intestinal flora.

Around a quarter of the salmonellae in the gut of infected mice produce T1. However, these pathogens have to carry a heavy burden: they breed more slowly than their T1-negative conspecifics and are attacked more by the immune system. Thus, the group of T1-positive pathogens is effectively a suicide squad that self-sacrifices to improve the living conditions inside the gut for the whole Salmonella population. Both subtypes can switch from one state to the other: T1-negative individuals can start to produce T1 anytime.

Roland Regoes, a mathematical biologist from the Institute of Integrative Biology, joined the team for the present project. Using computer simulations and mouse experiments, the ETH-Zurich scientists were able to show that both subtypes are important for Salmonella to team up against mutants.

In all biological systems where an organism provides its conspecifics with a common good – like the T1-positive salmonellae with the inflammation of the bowel in this instance – mutants of the same species that wangle an advantage out of the common good can emerge. It is no different here. “As the salmonellae breed, offspring emerge that have lost the blueprint of the protein machine T1 in their genetic makeup and thus permanently forfeited the ability to enter the intestinal mucosa,” explains Hardt.

Thanks to the inflammation of the bowel triggered by the original salmonellae, these “free riders” mutants are initially able to flourish. If they infest a new host, however, they are unable to produce any T1-positive salmonellae, thus making them incapable of survival in the medium term. It is a different story for the T1-negative salmonellae with the genetic ability to produce T1: they can prevail against the mutants and establish a successful Salmonella colony in another host by re-starting to produce T1 later on.

Naturally at an optimum

The team of T1-positive and T1-negative salmonellae is thus a winning combination. “The ratio of 1:3 in which the two subtypes appear in nature is precisely the one that enables the salmonellae to defend themselves against mutant frauds the most successfully,” says Regoes, as the computer simulations he developed with his doctoral student Victor Garcia revealed.

Salmonellae are not the only organisms where genetically identical individuals differ outwardly and functionally and rely on teamwork. “A similar phenomenon can also be observed among social insects such as bees and ants,” says Médéric Diard, a postdoc at ETH Zurich and first author on the paper. Worker bees or ants have the same genetic makeup as the queen, but differ from her greatly in appearance and the roles they perform. The workers construct the nest but do not reproduce (as T1 positive salmonellae) while the queen reproduces without working (as T1 negative salmonellae).