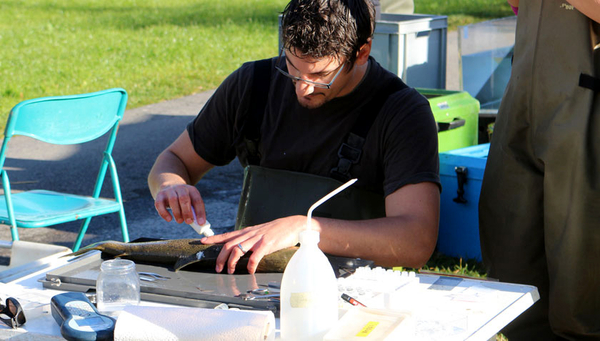 There’s a new face at the fishing advisory office (FIBER) in Kastanienbaum: Philip Dermond is taking over from Sébastien Nusslé and is thus the new co-director with Corinne Schmid. Philip Dermond transferred in October from the Fish Ecology and Evolution department at Eawag to FIBER.

Philip Dermond studied at the University of Zurich, joining the Fish Ecology and Evolution department at Eawag in 2015 where he completed his doctorate on the migration behaviour of trout around Lake Lucerne. Until he takes up his promotion, he will work in the fishing advisory office on a part-time (50%) basis.

A keen angler in his spare time, Dermond has specialised in the fields of behavioural ecology and fish migration. He will work alongside Corinne Schmid, who has been part of the advisory office management team since 2016.

The fishing advisory office (FIBER) is funded by Eawag and the Federal Office for the Environment (FOEN). The strategic direction is the responsibility of representatives from both institutions as well as those from the Swiss Fishing Association, the Association of Swiss Fisheries Inspectors and the Hunting and Fishing Managers Conference, and links organisations from practice, administration and research, with the aim of actively promoting angling and surface water conservation.